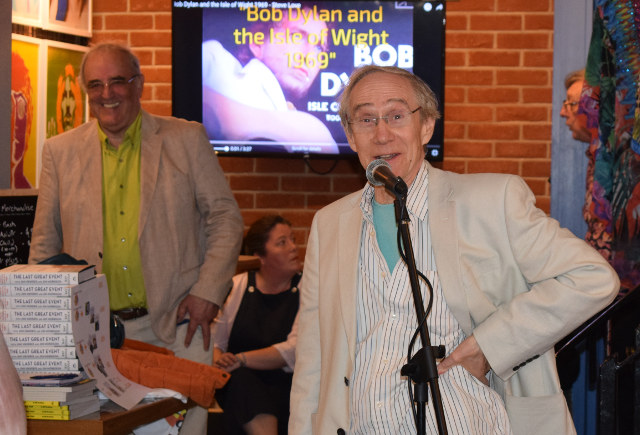 The spirit of 1969 was recently recreated at That 60’s Place in Cowes for the launch of All Wight Now’s Million Dollar Bash, which is to be held at the IW County Showground on Saturday 31st August.

A whole wall of memorabilia was given over to Bob Dylan and footage from the original festival was shown.

Returning artists 50 years on
This year’s celebratory one-day festival will feature many of the artists who played at the 1969 festival including Festival Director Ashley Hutchings’ band Dylancentric.

This is a band hand-picked by him especially for Million Dollar Bash, who will recreate the numbers Dylan played in 1969.

Artists on the bill include Richard Thompson, Wishbone Ash, Kossoff: The Band Plays On, Julie Felix, Jacqui McShee’s Pentangle, The Pretty Things Plus, Judy Dunlop, Banter, Blair Dunlop Trio and Ken Nicol. Liverpool Poets Roger McGough and Brian Patten will be sharing a selection of their thought provoking poems from the time.

The Voice star
Rising star Deana Walmsley, who performed on The Voice, is also on the bill and she played a set on the balcony of That 60’s Place, with those attending filling the road to listen and take photographs, and passers by stopping to watch.

Even Rob da Bank wandered past and stopped for a few words with Ray Foulk, ‘The Man’.

Sculptor Guy Portelli brought a maquette of the life size Bob Dylan sculpture which he will cast in bronze and place on the island.

Guy is also compiling a collection of hand print outlines that are then filled in with mosaic work, as a record of the original festival artists and those who have played at subsequent festivals.

Peter Harrigan was the original 1969 festival’s Publicity Director at the tender age of 20 years old!

Find out more about The Million Dollar Bash, (tickets just £44 each) by popping over to the All Wight Now Website.