We’re told that austerity is over, but the group campaigning to save the Isle of Wight’s mental health day centes believe “the books are balanced on the backs of our most vulnerable friends, family and neighbours” and they challenge the credibility of council’s commitment to ‘listen to service users’. 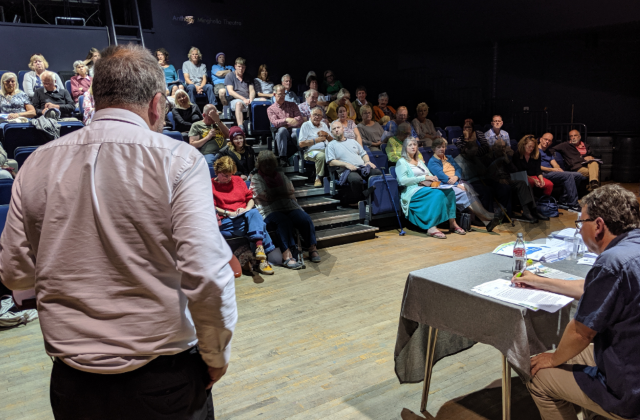 Hang on a minute, Isle of Wight Council. We read your response to over 5,500 Islanders who are imploring you to reconsider plans to close mental health day centres across the Island following the public meeting to discuss the proposals, and found little comfort.

You keep doing that thing some politicians do so well, saying lots without really saying much at all.

“Before any changes in provision are made, every person attending the current services is being reviewed so we can be clear we are continuing to meet all eligible needs and, where we do not have a statutory duty, that we are actively supporting those people to access alternative support”

It’s not just enough to have the centres. People need to know about them; people in need of the service and practitioners alike.

There is room for improvement – there always is, but there’s no denying the work those centres do is, for some, lifesaving.  The people that use and work at the day centres recognise the need for some improvements, saying at the public meeting on Thursday:

“We’ve never said the centres don’t need improvement or transformation, but as part of that we must have drop-in centres that people can get to!”

Essential component of comprehensive service
The staff group, supported by their trade union UNISON, have always been (and remain) very keen to be fully involved in all discussions regarding the development of the service in imaginative and progressive directions – but they themselves see the retention of Day Service provision as an essential component of any improved, more comprehensive service.

Many people spoke of the value of and need for these services. One woman, a single parent, sent a statement to say that these services had saved her life, being one of very few that she had been able to attend with her baby when she needed to.

Healthcare staff unaware of day centres
Someone spoke who had lost a child to suicide, as did a support worker who had lost two people to suicide in the last year, and a man who had been saved from suicide by the day centres – which, by the by, he only learned of by accident, despite being a diagnosed schizophrenic. He said:

“We’ve got to have a system that provides care where it’s needed… and we have that in the day centres. What we don’t have is a coordinated system whereby healthcare professionals know they can refer people to the day centres.

“I had a community nurse last year when I was in crisis, who was not aware of the day centres. I found them, quite by chance, and told her about them, and I got referred. I didn’t realise how ill I was at the time, but I was at the point of suicide.”

The centres would have been closed by now if the original plans had gone ahead. Maybe you were hoping people wouldn’t notice, or worse, wouldn’t care.

Over 5,500 people saying it loud
But over 5,500 people are telling you, loud and clear, we do care, we do not accept these cuts to vital services for the most vulnerable.

A room full of people gave up their free time on Thursday night to talk about these centres, and it was overwhelmingly clear that people consider the drop-in aspect of this service essential.

Surely, we can’t be expected to believe (again) that cutting a service improves a service? Surely too, this can’t just be about making a £140,000 (short term) saving? Are there any plans for what will happen to the land the centres sit on?

No more passing the buck
We’re so very sick and tired of hearing people pass the buck. The government pass the buck on to councils, along with extra responsibilities, and say it’s councils making the cuts.

Councils, rightly, say they have to make ‘tough decisions’ because of national government and their ideological austerity (hey! Wasn’t that supposed to be over?) …but the bottom line is that the books are always balanced on the backs of our most vulnerable friends, family and neighbours. Things can’t go on like this. ow

The Mental Health Blueprint outlines the plan intended to make our CQC-rated inadequate mental health care services safe. We have a suicide prevention strategy that is unfit for purpose according to Cllr Lilley, not least because there is no funding to implement the recommendations it makes.

Credibility of commitment challenged
The Blueprint says you will listen to service users and the community, the Mental Health Challenge commitment you made says the same, yet it was mentioned at the public meeting that Cllr Mosdell, (Cabinet Member for Adult Social Care and our appointed Mental Health Champion) and Dr Tozer have visited one of the centres only once, and very recently, in the last two years.

We must question the credibility of your commitment not only in the Local Authority Mental Health Challenge pledge, but also to the Island’s Mental Health Blueprint, if you fail to listen people who use the service, and the community.

newest oldest most voted
Alternative Perspective
Is anyone surprised? The Conservatives raison d’être is to reduce spending on services, particularly those for the the weak, vulnerable, indeed any group they feel is unworthy and unlikely to be Tory voters. Conservatives are more focused on ferret away as much taxpayers money as possibly in the direction of their corporate friends, most recently spending close on £100 million on consultancy advice for Brexit. Yet we… Read more »
Vote Up29-4Vote Down
elemental

Or realise that if you DON’T vote, you allow these corrupt crooks to further continue their psychopathic agendas in exploiting UK.

I was invited to a Community Consultation Event 18/12/2018, where it was categorically denied that any mental health facilities on IOW were under threat of closure. It seems apparent that the management pushing through service closures will lie through their teeth & are void of any integrity.