Isle of Wight Scout Danielle Marriott has recently been awarded her Young Leader belt, the highest award a Young Leader can achieve. 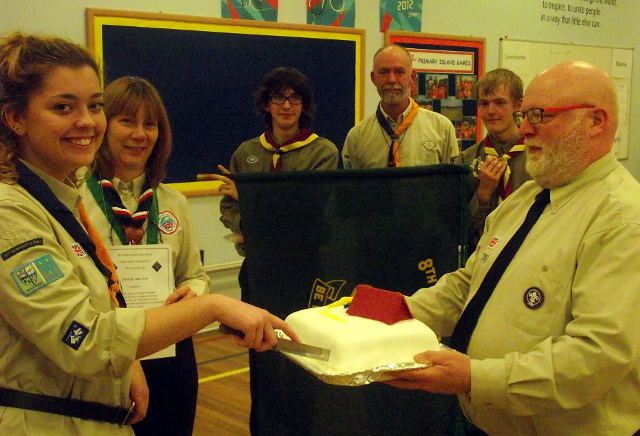 This in from Malcoln in his own words. Ed

Isle of Wight Scout Danielle Marriott has recently been awarded her Young Leader belt, the highest award a Young Leader can achieve. Young Leaders are Explorer Scouts, 15 to 18 year olds, who take on additional responsibilities, helping to run Cub Packs or Beaver Colonies

Four mission over over years
Danielle gained her award by completing four Missions as validation of her Young Leader training. Danielle has been a young leader with 8th Newport for over four years and has been involved in the programme planning and delivery and keeping records of the cubs badges and achievement.

Danielle is only the second Scout on the Island to earn the Young Leaders belt.

Now an adult leader
Danielle has been involved in Scouting since she was born as her parents are both Scout Leaders. When Danielle was ten, she was invested into 8th Newport Scout Troop. In 2011 she was part of the Island Contingent to the World Scout Jamboree in Sweden. Danielle is now 18 and is continuing in the Cub section as an adult leader.

Image: Danielle cutting the celebration cake which was made for her. The adults are (from left) Danielle Marriott, Claire Steen, Calum McFarlane, Ian Gear, Tim Hall and in the front Tom Harden. The cake was made by Ali Downer.