Robert’s amazing train adventure to Saigon began at Shanklin station. He, along with his partner and his Dad, will be passing through Brussels, Finland, Moscow, Beijing before reaching Saigon. All by train (plus two ferries) 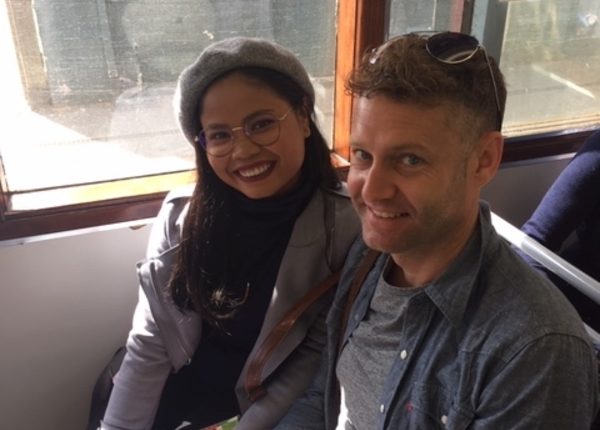 How about this for a train journey and a half.

OnTheWight reader David Finch got in touch this week to share details of a fantastic train journey he’s taking part in.

After a recent visit, his son Robert, who lives in Phnom Penh in Cambodia set off on Monday from the Isle of Wight back to Cambodia almost entirely by train. Robert’s partner has flown over to join him for the trip by train and David will also be travelling part of the journey too.

A love of trains
Although you might think this is their attempt to be eco-friendly, it has more to do with their love of trains. The epic train journey from Shanklin to Cambodia will take four weeks to complete.

The travellers left Shanklin on Monday, with stop off in Hampshire until Thursday and last night took the train from St Pancras to Brussels.

Then it’s onto Hamburg, Copenhagen, Stockholm, Turku in Finland (by ferry), Helsinki and St Petersburg, where they will spend four nights.

From there a train to Moscow, for an overnight stay.

Moscow to Saigon
David will then fly back to London from there, but Robert and his partner will take a train to Beijing, Shanghai, Hanoi, Saigon/HCM and then probably a bus to Phnom Penh.

Needless to say, he did not turn up at Shanklin station and ask for a single ticket to Saigon!

Safe journey to all involved. We wonder how the Island Line Trains will compare with the many other trains they will be using for the mammoth train trip.

7 Comments on "Epic train journey to Saigon started in Shanklin"

What a fantastic trip. All the best to them. I’m quite inspired! Any takers?

Sounds an amazing trip. Right up our street. We did a train journey from Bangkok to Aranyaprathet on the border with Cambodia. Less than £1 for a 5 hour journey. Train was spotless, interesting with lots of locals with their produce, fresh food brought on board at different stops. We walked across the bridge into Cambodia.

One of my life’s regrets (actually two) is that I visited Cuba and Zimbabwe as a tourist. Both have hideous human rights records and are vile dictatorships. My presence there ultimately put money into the coffers of these dictatorial regimes. Hindsight is a great thing and I utterly regret lining the pockets of those regimes.

I now look at the human rights environmental practices and all that before I decide my holiday destination. Do you?

Bang on. Visit and enrich the countries with the best records on human rights

Robert is a human rights lawyer who has spent many years in Cambodia and Myanmar and was for a time a rapporteur at the trial of the three Khmer Rouge leaders. Maybe best not to jump to conclusions.

They were there on a jolly, not manning the barricades demanding better rights for people.