On the fourth anniversary of when a handful of guerilla gardeners first entered the former hospital grounds to clear the overgrowth, the Friends of Frank James welcomed visitors to the grounds. 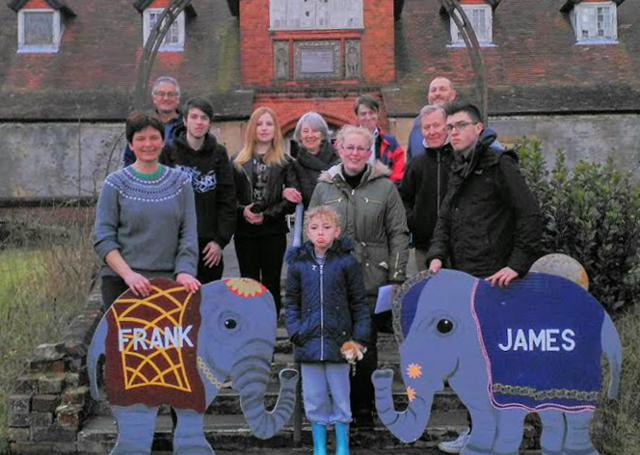 Yesterday (Sunday) saw the fourth anniversary of the start of guerilla gardening at the former Frank James Hospital in East Cowes. Thanks to Steve Goodman for this report on behalf of the Friends of Frank James. Ed

The disused much-loved former Frank James Memorial Hospital was again busy with visitors on Sunday when the gates and doors were opened to mark the fourth anniversary of the start of the campaign to halt and reverse the decade of neglect at the Grade II listed site. Thousands of hours of voluntary work
It was on a cold and wet Sunday 4th March 2012 that we entered the grounds as guerrilla gardeners and commenced work.

Since then, the Friends of Frank James have done thousands of hours of voluntary work on site, and successfully campaigned to get the long overdue repair work done to secure the building against further damage by weather, thieves, and vandals. The local and national publicity generated has resulted in help from many individuals, organisations, and authorities, but sadly not yet in a return to use.

A busy afternoon
On Sunday, more work was done (with Richard Manser from SafeSite IOW) to replace damaged and decayed boarding and fencing.

Josh and Louise Aitken provided home-made refreshments, and Josh set up information boards and a display of hospital items. Visits from former nurses
Several former nurses and others with fond memories of Frank James were among those visiting during the afternoon, resulting in some pleasant surprise reunions, and reminders of the better times when Frank James was used and maintained, and was such an important part of community life. The colourful new Frank James elephants presented on the day are also a reminder of the unique, outstanding, and generous gift (originally to the people of East Cowes) of the Frank James family and other fund-raisers, and the long history of contributing so much to the shared environment and activities of so many.

The Friends intend to continue their work as long as Frank James continues to be a shamefully wasted valuable asset.

Well Done to all concerned sorry I’ve not been able to visit for a while now but still a keyboard warrior for the cause.

Our thanks to Historic England for the feature and link to this OTW report in their latest South East Bulletin (which also includes a piece on the Community Action Isle of Wight information and advice session to be delivered by the Heritage Lottery Fund Development Team on the 25th April.