According to the Green MEP candidate, the Stop Brexit bus has had a great reception across the region in Oxford, Worthing, Hastings and Portsmouth. It’s on the Island today (Monday). 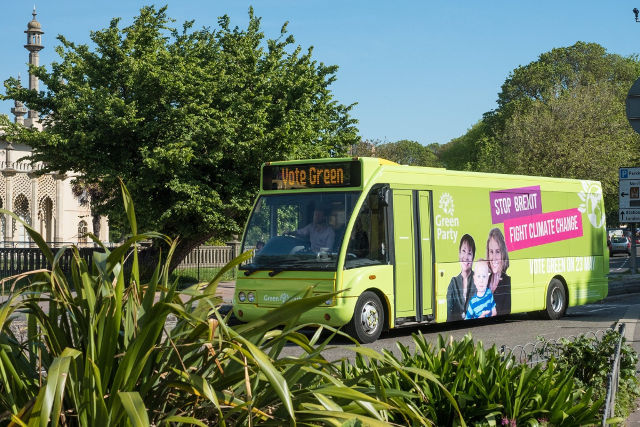 The Green Party ‘Stop Brexit Bus’ will be on the Isle of Wight today (Monday) as part of its tour of the South East of England.

In pursuit of increasing the number of Remainer votes and MEPs in Thursday’s election, the bus will be travelling across the Island for the whole day.

Where and when
There are scheduled stops on Ryde seafront at 11.30am and then Newport centre from 3.30pm – but you are sure to catch it in the Bay area and West Wight too.

The bus is powered by a 138kW battery system and electric motors, usually charged by solar. It can do approximately 100 miles on one charge, saving 140kg of CO2 emissions every day.

Lowthion: The bus has had such a great reception
Vix Lowthion, MEP candidate for the Green Party in the region and who lives on the island, said

“It’s so exciting to welcome the Stop Brexit electric bus to the Isle of Wight as part of the campaign for more Green MEPs.

“The bus has had such a great reception across the region in Oxford, Worthing, Hastings and Portsmouth – Caroline Lucas even travelled with the passengers to the oil drilling sites near Balcombe.

“Thursday’s elections are a critical opportunity to vote Green for Yes to Europe – and No to Climate Change.”

The bus will be leaving on the 6pm ferry, followed at 6.30pm by a rally and Q&A with our Green Party MEP candidate Vix Lowthion at the Riverside Centre, Newport.

The island voted to leave

Would they still vote to leave if asked again ???

Vote Up22-15Vote Down
hialtitude
I didn’t and neither did a lot of Islanders, now that a lot of people realise that leaving the EU will mean that basics like food are going to be more expensive, they have had a change of heart. That is why we need to have the People’s Vote, a second referendum, no one wants to be worse off, some of us can barely afford to survive… Read more »
Vote Up19-38Vote Down
Steve Goodman
Nobody voted to be poorer, or to further damage our international reputation, or to become more divided during the three years which have elapsed since that spanner was thrown into the works. Nobody knew then how we would be affected by whatever leaving terms might eventually result; we still don’t, but we have since seen a lot of useful information to allow a first informed vote. We… Read more »
Vote Up12-36Vote Down
greatergood

And the Brexit ‘stop the Green Party’ even greener bicycle is a resident on the Isle of Wight!
Wasting time, money and resources touring the country is hardly green, even if you take into account they use an electric bus!
Wasters

Vote Up24-54Vote Down
Steve Goodman
? Thanks to all the wasters wasting time money and resources in ways which have laid waste to nearly everything which supports us, we now know that we are down to our last decade to try to halt the damage by co-operating and getting as green as we can as fast as we can. We desperately need more green politicians, more green politics in Europe and the… Read more »
Vote Up12-25Vote Down
Mark L Francis

At least it didn’t have lies written on the side in big letters.