Here’s the full unedited text of what Bob Seely said in Parliament last night during the ‘stop a No Deal Brexit’ debate. 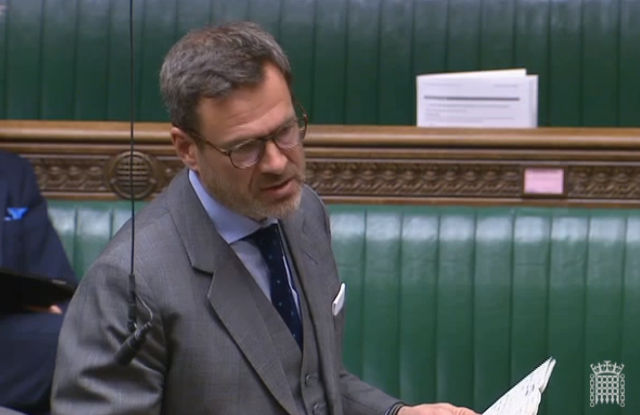 You won’t have been able to miss that last night (Tuesday) there was a debate and vote, widely referred to as the vote to stop a No Deal Brexit.

The official wording of the Bill starts, “That this House has considered the matter of the need to take all necessary steps to ensure that the United Kingdom does not leave the European Union on 31 October 2019 without a withdrawal agreement …”

During the debate, many MPs spoke, including the Isle of Wight’s MP, Bob Seely. We’ve picked out Hansard’s copy of what he said, so you don’t have to wade through the 132 pages of it.

The crux
Of course you should read the full text (below), but the crux of what he was saying was, “we need to deliver on a deal.”

He spoke of “binding the hands of the Government as they seek to negotiate a better deal”, being “counterproductive,” referencing his time in Basra.

The crux of the debate tonight is whether we seek to bind and obstruct our Government in a critical period, as they seek options between the current withdrawal deal, which has been rejected three times by lots of people in this House, and no deal, which is actually a series of mini deals.

I am sure that the former Chancellor of the Exchequer and my right hon. Friend the Member for West Dorset (Sir Oliver Letwin) have been engaged in negotiations at a far more senior level than I, but I do find it a little bizarre that we could seek to bind the hands of our Government at this point if those right hon. Gentlemen trust the people in power, and I have to say that I do.

I was engaged a bit in some of the negotiations with tribal Afghan leaders. I also conducted village negotiations in the Basra marshes in 2008 and 2009. Showing the limits of our negotiating power and showing what we were willing or not willing to do would have fatally undermined some of the conversations that happened to try to protect British troops and to try to stop ourselves being attacked. Therefore, binding the hands of the Government as they seek to negotiate a better deal is counterproductive, although I understand the concerns.

The reason why this debate is so bad tempered is that it has gone on for three years. We hear tedious clichés, such as “a blind Brexit”, “a Tory Brexit” and “I’m not here to stop Brexit, but…”. The hon. Member for Vauxhall (Kate Hoey) said that many people on the Opposition Benches were using this no-deal Brexit motion simply as another means to stop Brexit.

That is how I feel, because all we talk about is Brexit. I want us to get on and talk about lots of other things that are important to us. In fact—if Members do not mind me mixing my cultural references—it feels like groundhog day.

I want a deal, but I accept that the most important thing is to deliver, in order to have trust in politics. I am also aware that neither side is perfect, and that there are people now sitting on the Government Front Bench who could have voted for a deal but did not, just as there are people on the Opposition Benches who could have voted for a deal but did not. But we need to deliver on a deal. The reason I am against the motion is that it would provide another extension, and then we would simply continue in a debate that would become endless and tedious. We need to bring this to an end so that we can deliver on our manifesto commitments in other areas to the British people.

The Isle of Wight MP voted with the Noes, one of the 301 Noes, losing out to the 328 who voted for the Ayes.

Bob is a member of the ERG. One of the 301 prepared to go for No Deal Brexit.

The Island will not forget come November.

No fan of Bob but can you substantiate your claim that he’s a member of the ERG?

Vote Up10Vote Down
Rowan
I don’t think that’s fair to all of the 301. I’m very disappointed that 301 MPs were prepared to allow the government to bully them, but I did actually watch the whole debate on BBC Parliament, and many Tory MPs did actually voice concerns, before (sadly) saying they’d give the government a chance to negotiate a deal. I very much doubt if most of those 301 MPs… Read more »
Vote Up5-5Vote Down
iain mckie

I’d be very surprised if a junior officer in the Army was allowed anywhere near the photocopier, never mind any real sensitive material. Good old Sideshow Bob, every bit the PR man.

Translation: “I drove the Land Rover and waited outside”

Fitzroy Maclean Seely is not.

Vote Up3-3Vote Down
hialtitude
He should have quoted Churchill rather than Shakespeare, it would have been more relevant because last night, Johnson, ejected Sir Nicholas Soames from the Tory party. Sir Nicholas Soames is of course the grandson of Winston Churchill, Johnson, it is said, likes to think himself as a Churchillian figure, although I think Boris Johnson is actually more akin to the dog that advertises car insurance. What was… Read more »
Vote Up32-17Vote Down
sculler

Here’s the Hansard record of the votes.

Here’s the debate as broadcast by BBC Parliament. Some of the speeches by MPs are as weak and disappointing as Bob Seely’s, but many speeches are really worth hearing.

Vote Up3-1Vote Down
Rowan
Amazing that he objects to government being bound and obstructed, but doesn’t object to the government’s attempt to bind and obstruct Parliament by closing it down for five weeks at such a crucial time! The referendum was allegedly about supporting Parliamentary sovereignty. But we now see clearly that it wasn’t about all of us, through our representatives in Parliament, ‘taking back control’. It was about a tiny… Read more »
Vote Up8-9Vote Down
chartman

I wonder, not only for the IOW, how many leavers are now regretting their decision?I prefer the devil I know….

Vote Up5-7Vote Down
Steve Goodman
We do now know, not only for the IOW, how many people have died during the three plus years since this divisive damaging decision, and how many previously excluded young voters now have a voice. We also now know a great deal more about the substance and the possible pros and cons of what we were told to vote on then, and we now know that we… Read more »
Vote Up3-6Vote Down