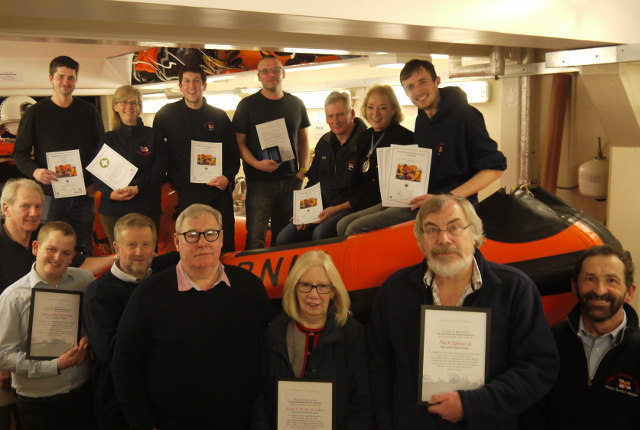 The commitment of volunteers with the RNLI at Cowes was celebrated with the presentation of awards at the lifeboat station by the High Sheriff, Gioia Minghella-Giddens.

Mark Harker, whose six years involvement with the station eventually culminated in him becoming a helm and assessor/trainer, received an inscribed glass.

Other certificates were presented to: Nick Edwards, for providing high quality photographs for the station and his involvement in station management; Willoughby Matthews, for supporting all office functions from the age of 14, as well as being an ‘exemplar’ as shore crew/plant operator.

Recognition for standards
Unable to be present for his certificate was Sandy Steen who until his retirement last month had provided professional management support, ensuring the station was fully integrated with RNLI standards.

High Sheriff has a keen interest
The High Sheriff, together with husband Richard, then joined crew members aboard the station’s Atlantic 85 ‘Sheena Louise’ in the boathouse. “She took so much interest in the volunteers’ roles. She was impressed in the high commitment of ordinary Island people make in the service of others, and she spoke very warmly of her admiration for the life-saving duties we undertake.”