Incredible rescue after teenager falls on rocks in Freshwater

Coincidences and the active involvement of people from Freshwater saved a 17 year old teenager, who was thought to be 3/4 of an hour from death after fall on the shoreline. 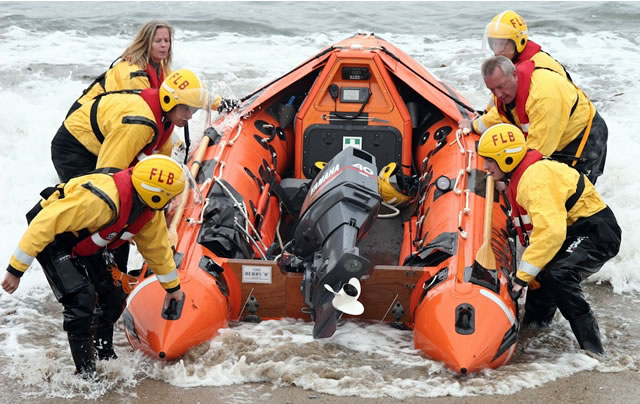 The incredible story of the rescue of the seventeen year old Freshwater teenager, Holly Casling, is today coming to light.

Having heard sketchy details of a rescue on Saturday we followed up today with Anthony Roper who was at the Helm of the four-person rescue. He described it to On The Wight as, “Probably one the of the most important rescues I’ve been involved with, from the point of view of saving a life.”

No bus to Freshwater
It all starts with a trip to Newport. As the bus service to Freshwater is so disconnected these days, Holly had to get the bus to the nearest location, Brook, and walk back from there.

Deciding that walking down the Military Road was going to be potentially too dangerous, she opted to walk under the cliff, along the water line.

Slipped on rocks
Setting off from Brook at 6pm, Holly slipped on the rocks on her way back and fell very badly, causing paralysis on the left-hand side of her body, while sustaining head injuries as well. Her planned connection with the outside world, her mobile phone, dropped into the sea, rendering it unusable.

Through a number of fortunate coincidences and the brave work of those involved with the rescue, she is alive to tell the tale. Without that, it’s felt that she would not have survived the rising tide.

Vigilant local fisherman
Local fisherman Andrew Barnes, known locally as Block, was out on the sea working, and most fortunately he was fishing an area that he hasn’t fished for a long time.

While on the boat, he heard what he thought was a seagull. Sensing something not quite right, he pointed his newly self-constructed camera and spotlight at the cliffs. He then raised the alarm.

RIB launched into darkness
Four of the volunteers at Freshwater Independent Lifeboat went out in their smaller RIB, due to the expected difficulty of reaching the teenager at the location. They launched into complete darkness.

It turned out to be a wise choice, the area was very rocky, and although rising, the low tide was still insufficient to give clearance over the rocks.

Craft dragged over rocks
Three of the crew, Anthony, Matthew Wolfe and recent-joiner Matt Jay, got out of the craft having to physically drag the craft over the rocks in the dark in an attempt to get close to the injured teenager.

Using great care, they transferred her to the stretcher they had onboard, then had to very carefully weave their way out around the rocks to take her back to base.

Transferred to hospital
An ambulance was on-shore to rush the teenager to St Mary’s Hospital in Newport, still on the lifeboat’s stretcher.

At this time the teenager’s hypothermia had become more extreme, with her losing conciousness every minute, or so.

A 10-person team was awaiting her arrival at St Mary’s. She has now returned to home and is recovering.

Anthony told On the Wight that they estimated that in only 3/4 of an hour more, she would have been lost due to the rising tide, her inability to move and hypothermia.

We wish Holly a speedy recovery.

Image: © Used with the kind permission of Barry James Wilson

I think it’s great we have a media outlet that is thoughtful enough to tell the story of a fisherman and a rescue team that probably saved the life of a young lass in the West Wight.
I don’t think these chaps in the West Wight get enough recognition.

Vote Up00Vote Down
MrsJ
Well Done to All concerned… So glad to hear Holly is safe and special thanks & Well Done to alert Fisherman Andrew Barnes :) I grew up in Freshwater and the last bus was 5pm then but that was in the 1960s … Looks like nothing has changed, do SV know this is 2012 and this is supposed to be ECO Island running lots of buses, why… Read more »
Vote Up00Vote Down