The results from yesterday’s championship

Many thanks to Martyn Cutler from the IOW Car Club for this report from yesterday’s championship. Ed 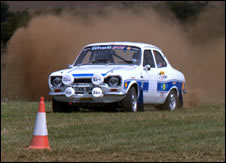 The fourth round of the IOWCC championship was held at Atherfield on Sunday.

The third season running at this venue and fast becoming member’s favourites with its quick grassy surface presenting challenges for the drivers, smooth driving is a requisite to obtain faster times.

Lee Morey set the early time to chase with a 1:05.46 in his 4WD Subaru Impreza, the ability to get the power to the ground helping immensely. Steve Brett once again showed prowess to pilot his classic Mini to the summit of the leader board setting a very impressive time of 1:02.72. Lee came back at that time on his final run with a 1:01.94 which looked pretty infallible.

Tight timings
Dan Morgan, ever dependable in the West Wight Mk3 Golf GTi recorded a very impressive 1:02.15 moving him into second place behind Lee. Richard Weaver (pictured above) had decided to bring his Mk1 RS2000 Escort rally car out to play and he also set a very tidy time of 1:02.30 produced in his usual florid way.

Matt Trott, winner of last season’s Unsealed Surface Championship looked fast from the outset and he proved to be the eventual winner with a very quick time of 1:01.34 again in the Mk3 Golf Gti pipping Dan’s time by 0.40 seconds. Once again an excellent drive from Mr Trott, he now looks like the man to catch in the USS championship. I asked Matt what he thought of his first win this season, he replied “I am the current unsealed champion, my defence starts today. Bring it on!”

Not just for the boys
Congratulations must also be extended to Rebecca French who hustled her way to the fastest lady driver of the day with a very commendable time of 1:04.71 putting her in thirteenth place on the day.

Driver of the day is awarded to Steve Brett, although there were many outstanding drives today Steve proved that you do not have to be captaining a modern vehicle to get to the top of the times, his classic Mini proving just as good as the competition.

Thanks must be extended to the land owner, our sponsors and all the spectators.