If you’re a fan of crime novels, you might find it hard to put down MJ Trow’s latest book which gives a fascinating insight into the world surrounding Ripper correspondence. 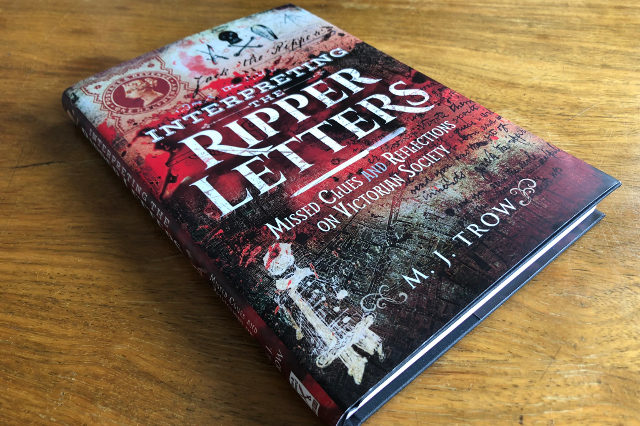 The successful Isle of Wight author and crime historian, MJ Trow has just published his latest book on Jack the Ripper.

Although he has written several books on the infamous Victorian murderer, ‘Interpreting the Ripper Letters’ is the first to analyse the motivation behind the writing of ‘Ripper letters.’

Exposing the myths
If you’re a fan of crime novels, you might find it hard to put down this fascinating insight into the world surrounding Ripper correspondence.

The book re-evaluates the mindset of Victorians in response to the Whitechapel murders that took place over 130 years ago and exposes several myths about the provenance of Ripper correspondence.

A Ripper expert
‘Interpreting the Ripper Letters’ is not about the world’s first serial killer, but rather the sick, the perverted, the twisted souls who put pen to paper purporting to be the killer or suggested ever more lurid ways in which he could be caught.

Opening with a ‘Buyer Beware’ foreword highlighting a so-called Ripper postcard fetching £22,000 at a recent auction, Trow’s in-depth knowledge of the subject is clear.

At home with Internet trolls
Trow explains how innocent men were put in the frame by Victorian trouble-makers who would be perfectly at home with today’s Internet trolls, pointing cruel fingers in almost perfect anonymity.

Ripper documentary
Once of Trow’s several books Ripper books, Quest for a Killer, was featured as a documentary for the Discovery Channel in 2009.

He’s also conducted his own Ripper walks in Whitechapel and is a regular lecturer at the annual Ripper conferences held each summer.

Available now
The hardback version of Interpreting the Ripper Letters is priced at £19.99, but available currently via the Pen and Sword Website for just £15.99.

Kept me alive
In the acknowledgements you’ll see thanks to Trow’s wife typing the manuscript and literally keeping him alive.

This relates to when he collapsed suddenly at home and had to be given CPR by his wife Carol until the ambulance arrived. He was taken by helicopter to Southampton, where he underwent several operations to bring him back to health. Last year he held gave a talk as part of the Isle of Wight Hidden Heroes project and raised funds for the Hampshire and Isle of Wight Air Ambulance.