It’s taken them a while, but the Isle of Wight council are finally making the “vital improvements” to the roads around the floating bridge to improve safety of pedestrians and avoid lorries getting stuck. 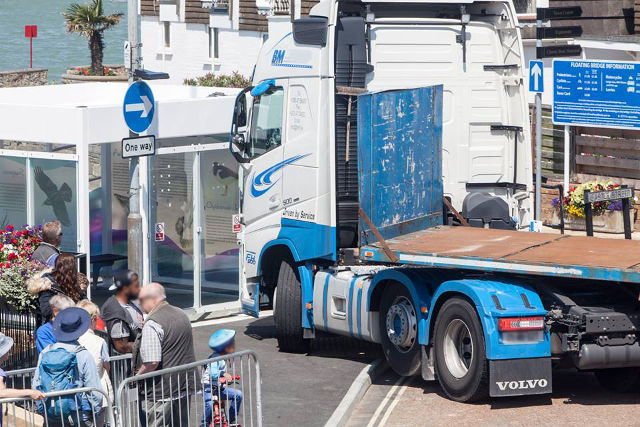 Access to and from the Cowes floating bridge will be made both easier and safer for pedestrians, thanks to new highway works due to start later this month.

Island Roads were instructed by the Isle of Wight Council to design a scheme that would include features on both sides of the Medina river to improve pedestrian safety around this important link in the Island’s transport network.

Work commences in June
The work is scheduled to start after the Isle of Wight Festival and be completed by the summer school holidays.

In Ferry Road, East Cowes, a new ‘build out’ will be constructed removing the current offside lane.

“The current arrangement on-site is both confusing for HGV drivers and detrimental to road safety due to large vehicles getting stuck at the junction and the resulting manoeuvres/footway overrun that occurs.

“The proposed scheme should improve lane discipline and is designed to create a more suitable swept path for HGVs needing to enter Castle Street and reduce the risk of them over-running the pavement.”

The new area will include a seat and litter bin as well as two ticket machines for the floating bridge, placing them on the most direct route to the foot passenger waiting area.

Members of East Cowes Town Council have also been asked whether they would like to enhance this new public realm area.

Cowes terminal
Meanwhile, in Medina Road, Cowes, the road will be narrowed and the pavement extended out to provide more space for people to wait for the bridge.

The area will include railings to segregate foot passengers waiting to board the floating bridge and those who have disembarked.

There will also be a new crossing point for pedestrians.

It is anticipated the floating bridge will operate as normal throughout the works, although foot passengers and motorists will be expected to exercise caution when in the vicinity of the works.

“We look forward to commencing work on this scheme and bringing about these vital improvements for both motorists and pedestrians in the area.”

Further detail
Both ticket machines for the floating bridge include the option to pay by cash or contactless card payment.

The machines also enable Saver Card holders to ‘top up’ their cards.

Foot passengers without Saver Cards are encouraged to purchase their ticket from these machines.

Had the Council in their ‘wisdom’put the passenger waiting room etc where it used to be then we wouldn’t have had half the problem!
In reply to Nielwheel this would involve turning right out of GKN against the flow of traffic to cross Red Funnels marshaling yard which gets very busy at peak times.

The best road improvement would be a bridge or tunnel under the Medina, all else is akin to putting lipstick on a pig.

Indeed great idea, why not?
99.99% of the lorries in East Cowes are either leaving from, or returning to the Red Funnel ferry.
It’s about time Red Funnel did something positive for the town instead of continuously destroying it.
(Statistics plagiarised from Cllr Ian Ward’s Floating Bridge data)