Residents in East Cowes want to know when something will be done about the weekly problem of lorries getting stuck on the junction by the Cowes Floating Bridge. 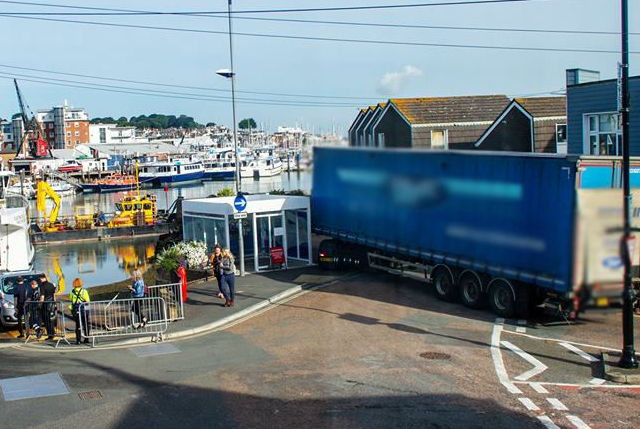 Last summer (July 2017) the road layout and relocation of the shelter for foot passengers by the East Cowes terminal of the Cowes Floating Bridge received a great deal of criticism after photos and video of an articulated lorry struggling to get around the junction were published.

The problem of lorries coming down the road approaching the floating bridge and taking the right-hand lane instead of the left-hand lane is nothing new. This latest incident resulted in the driver of the lorry hitting the shelter and damaging his front bumper (see the photos below).

A weekly problem
According to Allan Marsh who lives within sight of the junction (and took the photos) it’s something that happens on a weekly basis and has been for a very long time.

Allan explains that by posting the photos on social media it was not a dig at the driver, but instead,

“A comment on the state of the junction and the need for something to be done sooner rather than later.”

He’s sent photos to Cabinet member for transport, Cllr Ian Ward and will let you know what he hears back.

Risk to pedestrians
As well as the problem of lorries getting stuck, concerns have been raised about pedestrian safety many times, especially since foot passengers waiting for the bridge (in the new position to the north of the slipway) are now closer to the lorries struggling to get around the corner and having to mount the pavement.

OnTheWight has written to Isle of Wight council to ask whether the road layout will be re-assessed and when. newest oldest most voted
confidential
It would seem that Cllr.Ward the Cabinet Member for Transport and Infrastructure is failing both on land and sea. What a sad juxtaposition whereby an articulated lorry appears to be attempting to assist the CHC workboat MV Seaclear hold the Floating Bridge against the ebb tide because the Chief Executive apparently forgot to check its design properly. What does it take for a Cabinet Member and the… Read more »
Vote Up470Vote Down
eastcowes
Ten years we have been telling the Council how to make this intersection safer, then they bodged the whole thing up with the new floating bridge design and itspedestrian queuing to make it all worse. The total cost of all of these possible changes with the floating bridge and land and roads combined with increased costs of this bridge over 30 years, and a worse service, means… Read more »
Vote Up39-3Vote Down
walkingwizard

But Ian Ward will say the lorries get round 95% of the time which is “pretty good”!!