The council papers justifying it say the approach of the private sector investors/developers interested in acquiring the harbours, “is to be welcomed”. 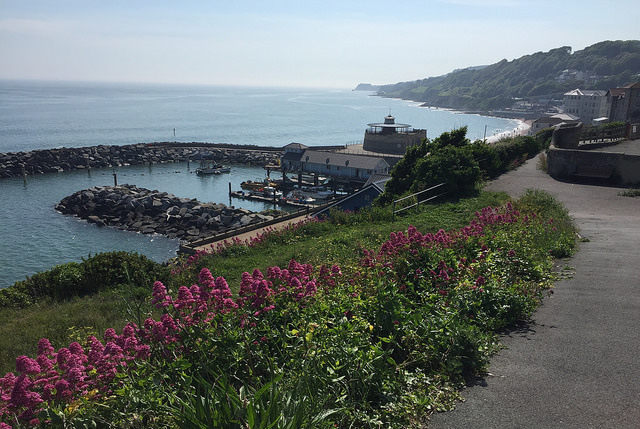 Continuing down a path previous Conservative administrations have trod, of selling off public assets, such as Ryde Theatre, Ventnor Winter Gardens and Botanic Garden, members are being asked to approve the freehold or leasehold transfer of Ryde by way of an open marketing exercise and for the external management of Ventnor Haven to be transferred to a third party on the open market.

The Conservative administration are proposing making the decision away from the public gaze (by Delegated Decision).

Significant ‘savings’
As is often the case when they seek to justify selling public assets, the council are listing large costs associated with the assets.

They state the over the next ten years a revenue loss estimated at £515k and a capital investment exceeding £1.2.million to cover dredging and repair costs cannot be covered by the council.

Paying designers to find solution
One example of the costs include the ongoing removal of microalgae from Ventnor Haven – around £75,000 per annum.

As previously reported by OnTheWight, the same company who designed the haven were then commissioned to solve the problem of seaweed gathering in the harbour.

Council papers reveal that although “alternative methods of dealing with the seaweed have been explored, no viable alternative has been identified”.

Recommendations
Details of the plans are set out in a Delegated Decision document issued today. The recommendations read:

Agree to implement options (1), (4) and (6)
Option 1 – To offer the freehold/leasehold of Ryde harbour on the open market with a restrictive covenant that it be only used as a harbour/marina; such covenants to only be removed if an alternative use of the area could generate a significant and sustainable economic benefit to Ryde and/or the Island. Any consideration should include a reversion to allow for any future development of the seafront.

Option 4 – To offer the transfer the management of Ventnor Harbour to a third party through the open market at no cost to the council;

Option 6 – The final agreed terms of any transfer/outsourcing to a third party be to be the subject of a further delegated decision of the Cabinet Member, but where no terms are agreed then the council will continue to directly manage the harbour.

Leader: “It’s just not right”
Earlier this year when concerns were raised about the rising costs of maintaining Ventnor Harbour (£153,000 in 2016-17), Leader of the Isle of Wight council, Cllr Dave Stewart, said,

“I can assure you I have been told we absolutely have plans to deal with the Ventnor [Haven] situation and I think we should.

“I think it’s wrong, I’m not sure that people will love me now but that’s not the point. I think we actually need to sort that out, it’s just not right, so we will push hard.”

The paper
Click on the full screen icon to see larger version.

Image: londonmatt under CC BY 2.0

newest oldest most voted
Colin
Just another normal day for the IWC. These harbours were built without any thought for the cost of maintenance for them. Two great big vanity projects by councillors who hadn’t a clue what they were doing and nobody in their right mind would have committed money to these and other projects who had any sense at all. Ryde harbour, accessible for a few hours a day with… Read more »
Vote Up49-4Vote Down
davimel
Haven’t many of us been saying for years that the Ventnor Haven was a complete and total fiasco? Perhaps charging a reasonable commercial rent for both properties might have helped, as would making those who designed the Haven remove the stinky seaweed that collects as a direct result of their design at THEIR cost, not ours… WE didn’t design the thing so why do WE pay for… Read more »
Vote Up39-4Vote Down
eastcowes
This Tory-led Council is slowly selling off the public’s power against the rich, by dismantling local government from the inside, to the point that we own nothing and have operate nothing. Newsflash: the rich don’t care about trying to help people less fortunate than them, and only want to own things and operate ‘services’ that benefit their bottom line. The IW Council – selling off OUR assets… Read more »
Vote Up36-8Vote Down
realitycheck
How did ‘the rich’ get rich..? Define ‘rich’ and ‘less fortunate’… Just thinking that people who work hard and manage their money sensibly may be richer than those who don’t work hard and spend beyond their means… I am wrong in assuming that a Labour Council wouldn’t do the same, faced with the same situations..? Are all Labour party members / Councillors / voters not ‘rich’ and… Read more »
Vote Up8-14Vote Down
eastcowes
realitycheck, have you ever been poor? Properly poor? Privatisation of public assets – from Council housing to the railway system et al – is about making a few very people very rich. As they say, “follow the money”. It has nothing to do with hard work, and everything to do with luck, privilege, and often taking advantage of others, often by underpaying people at the expense of… Read more »
Vote Up25-5Vote Down
beacher

Ignoring the issue of the larger issue of selling off assets as a whole, not sure how the ‘poor’ benefit from the Council owning both the harbours? Surely they are costing the poor….every pound spent subsidising them, potentially means less for social care Etc. As they are effectively loss making businesses, it’s going to be a hard sell for the council!

It’s the Tory Government that has put us in this position. But it is well known that some Tory Councillors want to privatise public assets to purposely weaken local governments. The Nigel Farages of the EU parliamentary process. Who loses out? The poor. Always.

Ventnor Haven sold to Cheetah Marine for a quid then………..

Maybe stopping holiday lets avoiding council tax and business rates would be a better way to balance the books?

Vote Up30-10Vote Down
boatman
Ryde Harbour. Such a shame that our IW Council cannot work in a businesslike way. Whilst the Harbour continues to deliver a small operational profit each year the Council has failed to hypothecate (set aside) a small proportion of its annual budget to pay for the capital costs that were anticipated. The result, once again, is the bleating and the wringing of hands at the high capital… Read more »
Vote Up160Vote Down
bigj
It is not rocket science, but the last time that I looked, a couple of weeks ago, the harbour is rapidly filling with sand and presumably, seaweed, which certainly has not been removed, as per the apparent contract that ‘we’ have paid for. Fishing boats are now landlocked for much of the day, whilst the original intention of the harbour was to allow a longer working day… Read more »
Vote Up15-3Vote Down
boatman
Just what is the purpose of this expensive Council if not to run valued local services? The major public services could just as well be run from Hampshire. The Isle of Wight Council is too expensive, too inefficient and no longer sustainable as a relevant locally focused authority – get rid of it and the 40 wasters who draw their allowances and offer so very little in… Read more »
Vote Up13-2Vote Down
oldie

CB500 is the best solution by far. Cheetah Marine are a local family. In fact Cheetah Marine together with Blakes even better or even with Besty and Spinky. They are all local families who care about Ventnor. If the Council want shot of the whole project
don’t sell it to an outsider for £1 like you did with the Winter Gardens.

I wasn’t offering that up as a solution I was referencing past council stitch ups! There has been altogether too much favouritism shown to Cheetah already at the expense of the general population of the town. Brick up the harbour and be done with it.

According to Ed Blake of Ventnor Haven Fishery
“The harbour cost £1.2 million to build and those rocks are still worth £1.2 million.”
So I do hope that the money invested has generated a return based on these figures, to be reflected in the asking price?

Vote Up30Vote Down
oldie
CB500 I realise that. However, Blakes Freshly caught fish , watching Jeff Blake bring in the catch every day of the year together with Cheetah Marine and Besty and Spinkys by the Island shaped Paddling Pool are a tourist attraction for the whole Island, not just Ventnor, together with the Spy Glass and The Metropole. (the Cascade looked a bit sad and neglected this year with the… Read more »
Vote Up3-12Vote Down
CB500

Oldie. Sorry, I wouldn’t entrust most of that lot with anything. Their sole motive appears to be a shameful greed. From overfishing to acquisition of public land to minimum wage, zero hour contracts. The only thing that seems run with any thought to tradition and the benefit of others is the beach franchise.