Ventnor Harbour: ‘The situation is just not right’ says Leader

Leader of the Isle of Wight council says the high cost of running Ventnor Haven “is just not right” and that the IWC has “plans to deal with” it. 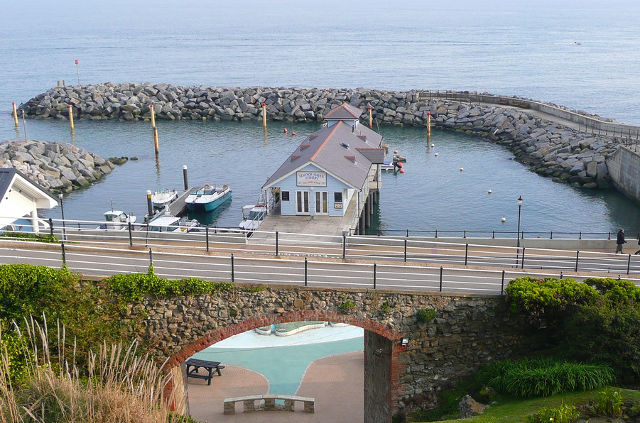 The remarks emerged during discussion about the latest Annual Report for Ventnor Haven (see below) which revealed the total operating costs plus ‘support services and other costs’ was £153,000 in 2016-17.

“I can assure you I have been told we absolutely have plans to deal with the Ventnor [Haven] situation and I think we should.

“I think it’s wrong, I’m not sure that people will love me now but that’s not the point. I think we actually need to sort that out, it’s just not right, so we will push hard.”

Contract extended
As reported this time last year, Cheetah Marine has received over half a million pounds from the Isle of Wight council since 2010 for looking after Ventnor Haven.

As a result of the work being undertaken by Royal Haskoning to find a solution for the removal of seaweed from the Haven, Cheetah Marine’s contract has been extended through a deed of variation and will now expire on 31st March 2020.

Designers now consultants
Previously known as Posford Haskoning, Royal Haskoning designed the £2.4 million fairweather haven for the Isle of Wight council back in the early 2000s.

The same company is now being paid to solve the problem of seaweed gathering in the harbour.

Since the last Annual Report, the cost of removing the seaweed from Ventnor Haven has increased to £75,120 per annum.

Cost of running the harbour
The latest Annual Report reveals:

The report
Full details can be found in the report below.

Image: © With kind permission from Richard and Gill via the VB Flickr Group Pool

12 Comments on "Ventnor Harbour: ‘The situation is just not right’ says Leader"

If you build a huge concrete wall – it changes things.

If you build a harbour it alters the natural flow of the tides and the coastline, so you get sea-weed – just the same is happening at Ryde after building Ryde Harbour and at Cowes after building the breakwater.

As YJC explains, interfere with the natural landscape and you can create other problems.
Not bad going though for Haskoning though.
Get paid to design something for the IOW Council and then because of the problems created receive an income for the next 10 years to come up with a solution, all paid for by, yes you guessed it, the IOW Council / us the tax payers.

Thank you John for highlighting this serious issue over incompedance

And next on the agenda…. the sale and disposal of the Ventnor Harbour scheme.. £1 or vno….. sold to the silent bidder hiding in the corner. Been here done that got the Tshirt.

Vote Up17-4Vote Down
CB500
As Davimel says it will go for a quid to the Tory’s ( very ) favoured bidder or in scenario 2 – It is closed, aforementioned favoured bidder who got their ( our ) land for a steal in the first place claims to be unable to do business there, relocates and successfully applies for change of use of the big blue building to a block of… Read more »
Vote Up18-6Vote Down
richard

The thing here is that at this time of year, this is passing under the radar and going un-noticed by most people. Ignoring the wrongs and rights of the situation (of which there are many), wait until the Summer when Ventnor stinks to high heaven again!

Why aren’t the Police getting involved?

do you think police could prove anything ?

council and taxpayers would be better off giving the harbour to a charity now ,so that the harbour could be enjoyed by all,cause the more this goes on the more money is wasted on it £750,000.00 to maintain it by cheeta marine , plus consultant engineers who got it very wrong from day one ,and the future says millions of pounds more !

Vote Up2-1Vote Down
oldie
Always keep in mind the bigger picture. What happens to Ventnor seafront affects the Island’s main industry-Tourism. The Island families who do business on the seafront are serving the interests of all of us and they do a brilliant job! If £153,000 is the price it costs to keep away the ‘Great Stink ‘ in the summer season in order to keep the tourists coming to Ventnor… Read more »
Vote Up5-7Vote Down
honda

it smell very fishy to most people