Isle of Wight Councillors surveyed on how much time they spend on the Island. Here are the results

Questions of how much time some councillors spend on the Isle of Wight have been rumbling for months. They’ve all now been surveyed. Find out how your representative responded. 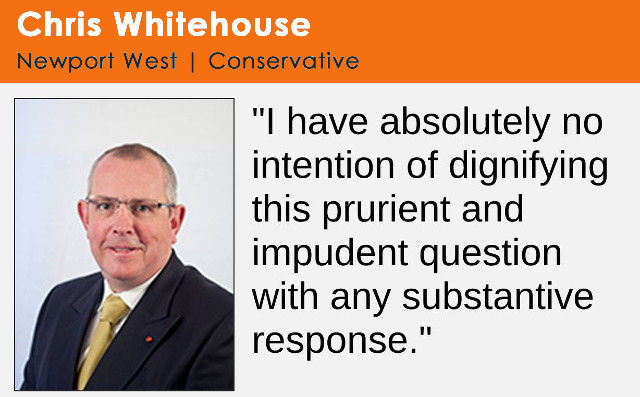 Last week, Cllr Julia Baker-Smith, member for Whippingham and Osborne, was criticised for splitting her time between Manchester and the Isle of Wight.

In the last year, Cllr Baker-Smith has missed two full council meetings and one meeting of the appeals sub committee.

Breakdown of time spent off Island
All Isle of Wight councillors were asked how much time they spend on the Isle of Wight — if it varies from month to month, they were asked to give a breakdown of time spent off the Island in October and November last year, or if they spend a large period of timing living abroad (see below for how your councillor replied).

Out of 40 councillors, 17 did not reply to requests for comment.

Refused to answer
Two refused to answer — Cllr Clare Mosdell, a director of an electrical company, and Cllr Chris Whitehouse, who runs a consultancy firm in London.

The council’s monitoring officer, Helen Miles, also told members the information was ‘over and above what is already available about you’.

In an e-mail to all councillors, Ms Miles said:

“Whilst it is of course entirely a matter for each of you to decide how to respond, I would advise that you may well decide the information sought is over and above that which is already available about you.

“Your register of interests, which is available on the Website sets out your address on the Island, and we publish on the Website your attendance at meetings.”

No reply from Leader
Leader of the council, Cllr Dave Stewart, did not reply.

However, Deputy Leader and Cabinet member for Resources, Cllr Stuart Hutchinson — who has missed no meetings in the last year — said:

“Time spent off Island is less relevant than the amount of hours put in and regular attendance at the committees one is scheduled for.

“Because of e-mail and Skype, it is perfectly possible to do a good job as councillor without being physically present for large chunks of time.”

“I stepped away from my cabinet role due to work and family commitments, and because I was not able to give it my full attention.”

Cllr Peace is a security consultant, and runs a hair salon in Ventnor with his wife.

Cllr John Kilpatrick and Cllr Karl Love had the second worst attendance records, having missed 25 per cent of required meetings.

Click on the image to see larger version, step through by clicking on the arrows.

14 Comments on "Isle of Wight Councillors surveyed on how much time they spend on the Island. Here are the results"

newest oldest most voted
eastcowes
Lots of pensioners don’t have internet access. If a politician doesn’t spend at least a few days a week on the island, how can they know what’s going on? Obviously there is the telephone, but having surgeries and meeting people out and about is an important part of the job. For all councillors who refused to answer or whose response didn’t answer the question sound too defensive… Read more »
Vote Up36-3Vote Down
nickstuart
Good question and congratulations to Councillors who responded. As there may be good reasons for not responding we have to be carefully about reading too much into that. BUT Chris Whitehouse’s (Conservative) response is breath taking in its arrogance and aggressiveness. Given his partisan and dismissive approach in the Council Chamber it is no surprise. Perhaps he spent too long in Westminster being self important? PS Now… Read more »
Vote Up12-1Vote Down
elemental
Anyone claiming the basic £7,700 allowance should be obligated to attend all requisite Council meetings IMO & should also be holding regular constituents’ surgeries; if not, they are failing to fulfil their oficial remit & are simply milking the “status” of being a councillor. It seems that several of the councillors listed both epitomise & represent the more affluent, second home-owning, part-time IOW residents as opposed to… Read more »
Vote Up6-2Vote Down
profoundlife
Who did the asking? I despair at the inward looking, isolationist nature of the questions here. A bizarre witch hunt for those who are off the island too much. It would be inconceivable in Hampshire to ask if/when/for how long people went out of the county. Councillors should be available to constituents, but that doesn’t mean 24hrs a day 365 days a year. They should understand their… Read more »
Vote Up15-33Vote Down
Sally Perry

It’s a perfectly reasonable question (asked by Megan the LDR) as a follow on from the criticism placed against one cllr choosing to live between the Island and Manchester.

Calling it a ‘witch hunt’ is a tad over the top. It’s about providing balance. It’s a shame certain councillors chose not to reply or refused to answer.

What was the ‘prurient’ nature of Megan’s question to which Cllr Whitehouse took exception?

Prurient (online dictionary)- adj.”having or encouraging an excessive interest in sexual matters, especially the sexual activity of others.
“she’d been the subject of much prurient curiosity”
synonyms: salacious, licentious, voyeuristic, lascivious, lecherous, lustful, lewd, libidinous, lubricious; ” – I think we should be told…

@ Confidential – there wasn’t one, I think Cllr Whitehouse is confused

Vote Up110Vote Down
profoundlife
Sally, you know I think you do a great job for OTW, but on this I think we’re going to disagree. It is a witch hunt in so far as people are calling for someone to step down because they spend time off the island which I think is too much. If people are severely impacted by living away, illness, personal crises for an long chunk of… Read more »
Vote Up3-6Vote Down
Sally Perry
I think you misunderstand the reason for the question being posed to all cllrs (or maybe I do?). My reading of it is that one councillor has come under a lot of criticism and scrutiny from her colleagues and residents for choosing to split her time between here and elsewhere, but there are other councillors who, for whatever reason, also spend a lot of time off the… Read more »
Vote Up10-1Vote Down
Geoff Brodie
In my quite long experience residents don’t want formal surgeries. Just the ability to meet with their councillor face to face when necessary. In my first couple of years I spent many a wasted hour hoping people would come and talk to me at my well-advertised surgeries. Provided they know how to contact you, easy contact shouldn’t be a problem. My details are on all noticeboards in… Read more »
Vote Up110Vote Down
Sally Perry

Point taken Geoff. I guess open lines of communication is what’s key here (and I recognise that you are one of the very active cllrs). Emailing/calling/writing a councillor and not getting a reply is very frustrating.

Vote Up110Vote Down
Geoff Brodie
Agreed. And your neck of the woods seems to have two of the most detached councillors. Being elected involves not only representing your residents, but also taking part in the overall governance of the Council, whether in power or in opposition (my personal default). The figures in the article don’t always say how many meetings each could have attended, but in my view if you are not… Read more »
Vote Up80Vote Down
eastcowes