The MP criticised the Isle of Wight council for how little they’re willing to talk to him about the housing crisis. He said the government target is totally unsustainable. 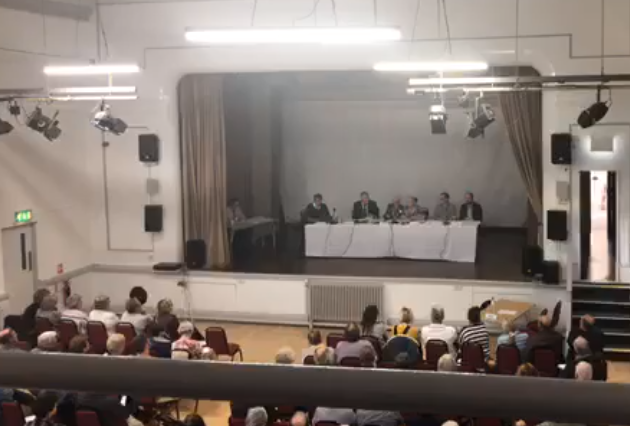 A planning application, to build up to 164 homes on land next to Queensgate Primary School, have been submitted to the Isle of Wight Council.

Several concerns raised
Residents raised concerns about the impact of the development on the town’s infrastructure, including roads, sewage systems and public services such as schools and GP surgeries.

Seely: A bigger political issue
Mr Seely, who has been campaigning against plans to build almost 10,000 homes on the Isle of Wight in the next 15 years, as set out in the Island Plan, said residents should not blame developers.

“It is not their fault. They are given instructions by your political masters, the council, to do what they are doing — but apart from criticising them, this is a bigger political issue.

“One of the things I find depressing about the council is how little they are willing to talk to me about the housing crisis they are facing, because I am able to help if they want to discuss it.

“We are chasing government targets. The number of homes is totally unsustainable.”

“In terms of housing units to be developed, and targets for affordable housing, the council has fallen behind. One of the key points here is we can have an impact on achieving those numbers.

“What we are keen to do is listen and understand.

“We have already held two public events, and had positive feedback, and we have made some changes to the building schemes.

“We are not going to be able to, I suspect, change anybody’s mind in this room tonight.

“What we want is to have the best possible scheme that can be delivered.”

Anger from the public
Members of the public voiced their anger and opposition to the scheme — asking why the council was undertaking the development in addition to raising concerns about its impact.

One Crossways Road resident said she already had to take her children to school in Wootton because those in East Cowes and Whippingham were full.

Council leader Cllr David Stewart, who also attended the meeting, and sat in the audience, said the council had not been invited to take part in the meeting to answer questions and respond to concerns.

Seely: The Island Plan is not for Islanders
Speaking after the meeting, Mr Seely said:

“I’m very glad Cllr Stewart was here and heard what everyone is saying.

“The Island Plan is not for Islanders. It is designed to hit random government targets and what we need is housing for Islanders in modest numbers that preserves our quality of life keeps our tourism economy, is sustainable and doesn’t overload our infrastructure.”

Mayor of East Cowes, Cllr Jane Rann, said residents had made their feelings perfectly clear — and urged the council to take note of them.

Love: “Yes, I will moan and I will protest”
Cllr Love said:

“I am thrilled with the turnout. Their passion about the town, and what they believe should be done, could be the starting point of the whole debate.

“I want to create a better environment for our townspeople and I do not believe building an estate of this type, in this location, serves any purpose for East Cowes.

“We should be at the centre of this and that is what I find difficult to work with. So yes, I will moan and I will protest.”

Bob Seeley.. Exactly what is he useful for? Powerless, full of personal pr and promises he can’t deliver. No tools, no teeth, no point.

Vote Up6-3Vote Down
Steve Goodman
So much for the con’s promised benefits of having a same party MP and council leadership working well together for everyone, and so much for the stupidity of sticking to the impossible idea that any semblance of sustainability is still somehow possible without changing the destructive ‘business as usual’ behaviour which has produced our present predicament. There is an environmental emergency. There are too many people, consuming… Read more »
Vote Up5-2Vote Down
Jenny Smart

Has our MP secured any extra money for the Isle of Wight?

What is the IW Council meant to? The Government is reducing the money Councils receive, so they have to raise funds in other ways. Housing will bring in much needed Council Tax revenue essential to maintain current services.