Isle of Wight swimmers recognised for their achievements

The courage and determination of five Isle of Wight children who have learned to swim against the odds or performed exceptionally was celebrated at the Southern Water Learn to Swim Achiever Awards. 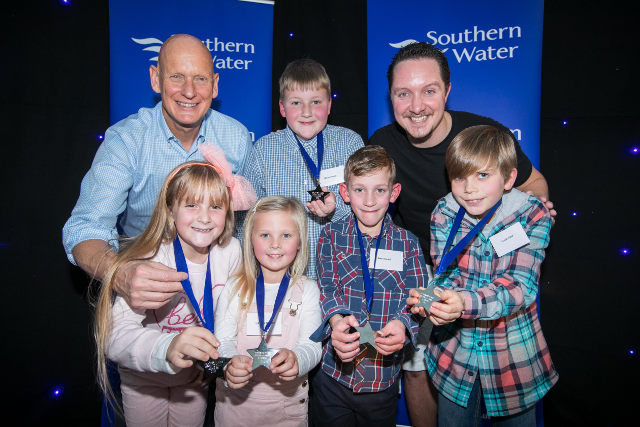 This in from Southern Water, Ed

Five Isle of Wight children picked up a top prize at this year’s Southern Water Learn to Swim Achiever Awards.

The children were some of a select few to have been nominated for an award by their swimming teacher on this year’s Learn to Swim scheme.

Olympians presented the awards
Each year the courage and determination of children who have learned to swim against the odds or performed exceptionally is celebrated as one child is nominated from each pool.

Olympic gold medallist Duncan Goodhew and Invictus Games gold medallist Mike Goody were at the event on Saturday (26) at the Pyramids Centre, Portsmouth.

“Seth has only been having lessons for a few years but has shot up through the stages. He’s just participated in his first gala and, although he was considerably younger than the rest, he did really well. He listens to everything and this shines through in his ability and technique.”

“Paisleigh is a credit to her mum and swimming club. Her determination to improve in the pool will take her far. She is a pleasure to teach and definitely one to watch in the future.”

“It sometimes takes Mitchel a while to master certain skills due to his dyspraxia but he always perseveres and succeeds. The best thing about Mitchel is his smile and he is a delight to have in the class.”

“When Louie first started swimming he was very nervous. However, he persevered and is now looking to move up to stage 6 soon. He brings a positive attitude to the group and is always so polite and a pleasure to teach.”

“When Lily started having swimming lessons she was too scared to go in the main pool but she has been very brave and overcame her fear. Now she has all her lessons in the main pool and has mastered front and back crawl, really impressing us.”

“Celebrating our young achievers is the highlight of the Learn to Swim scheme. We want to thank all the instructors at the clubs and pools across our region who give their time and expertise to teach all our young swimmers. Here at Southern Water we are passionate about keeping children safe around water. Next year we celebrate 25 years of Learn to Swim which will be a fantastic milestone for everyone who’s been involved.”

Learn to Swim supports lessons at 85 pools and clubs across the region and has helped teach more than 700,000 children to swim since it began in 1992.

It is sponsored by Clancy Docwra.