Cowes will welcome the world’s oldest, most respected and most challenging of oceanic races dating back more than a century and a half later this year. 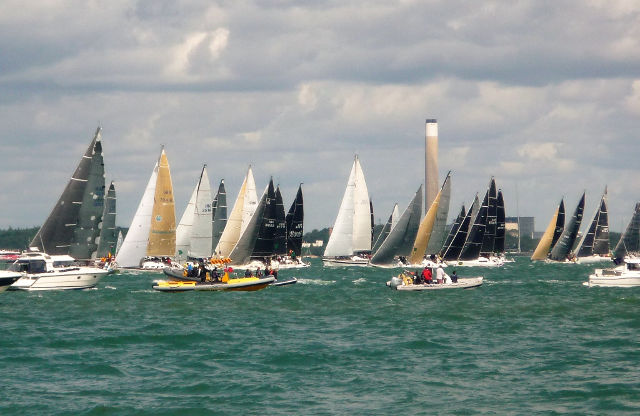 In 2019, two major yacht races, organised by the Royal Ocean Racing Club (RORC) will feature Cowes on their itineraries.

The Transatlantic Race 2019 starts from Newport, Rhode Island, on 25th June and finishes off Cowes. With a course length of 2,960 nautical miles it makes this event one of the longest yacht races open to both professional and amateur sailors.

A new addition to the 2019 race will be a doublehanded division. In 2015, a few entries in the 40-foot Class 40 division raced with just two sailors on board but they were scored among all the other entries.

In 1866, just 15 years after a syndicate of its members famously won what would become the America’s Cup, the New York Yacht Club ran its first Transatlantic Race. Three schooners entered – Fleetwing, Vesta and Henrietta, the latter owned by New York Herald heir James Gordon Bennett Jr. – for a prize purse of $90,000 (roughly $1.34 million in today’s money). To ensure it was a true test of seamanship, it set sail from New York in mid-December.

Remarkably all three of these high-powered, inshore racers made it to the finish line off the Needles, though six hands lost their lives, washed off the deck of Fleetwing during a gale.

The Kaiser’s Cup
The most famous Transatlantic Race was in 1905. German emperor Kaiser Wilhelm II put up a solid gold trophy, the Kaiser’s Cup, for the winner. This competition was intended as a forum for Germany to showcase its sea superiority at a time when Britannia ruled the waves.

In the end the Kaiser’s yacht Hamburg was beaten soundly by American Wilson Marshall’s Atlantic. Skipper Charlie Barr drove this now famous 227-foot, three-masted schooner from New York to The Lizard in just 12 days, four hours, one minute and 19 seconds, a record that would stand for 92 years.

Thompson: “The course is a classic”
Cowes based sailor Brian Thompson has taken part in the race. Brian – who first competed on this course in the 2003 Daimler Chrysler Transatlantic Race and was co-skipper on the trimaran Phaedo four years ago – said,

“The course is a classic.

“It is essentially the old Atlantic schooner record course, i.e. Charlie Barr driving with a pistol in his hand! It has got a lot of history to it. It is also one of the longest, hardest races in the world that IRC boats can do.”

Cream of the IRC fleet
This race attracts the international cream of the IRC fleet, from grand prix boats, to the very well-travelled and heavily campaigned Scarlet Oyster, the Lightwave 48 of Ross Applebey who is currently the holder of the Gold Roman Bowl for the Round the Island Race.

Unusually, the race will now run the week before Lendy Cowes Week, which dates remain unchanged, starting on Saturday 10th August. This break with tradition, in consultation with Lendy Cowes Week, has been made for a number of reasons, including weather concerns over late August.

“We have been wrestling with this decision over the summer and particularly the relative timing with other events in Cowes and the Solent.

“A late August start has weather implications for our big fleet and we anticipated running into the summer bank holiday would cause difficulty for many participants. Bringing the race forward by two weeks addresses these issues and allows us to encourage the fleet into Cowes in the pre-race days before the start.”

“Bringing the race forward to Saturday 3rd August will give more time for those competitors who wish to race in Lendy Cowes Week.

“The prize-giving in Plymouth will now be held on Thursday 8th August and this will allow competitors to make the journey back to the Solent in time to join in the Lendy Cowes Week racing.”

Finish line in Plymouth
Plymouth City Council and the Royal Ocean Racing Club (RORC) have confirmed that Plymouth will host the finish of the 2019 Rolex Fastnet Race.

Plymouth has marked the end of the biennial yacht race since its inception in 1925. Starting in Cowes on the Isle of Wight, competitors cover a course of 608 nautical miles and round the Fastnet Rock off the southwest coast of Ireland before returning via the Isles of Scilly to finish in Plymouth. The race has a huge worldwide following and has seen continued growth over recent years, with the limit of 300 boats having to be increased to over 340 due to high demand.

Registration for the 2019 Rolex Fastnet Race will open at 1200 UTC Monday 7th January 2019 . At the last running of the race in 2017 entries were grabbed in minutes of registration opening.