Despite previously saying that once the deadline was up the Cabinet would make a decision, Cllr Jon Gilbey is now saying the council have six months to decide what action they might take. 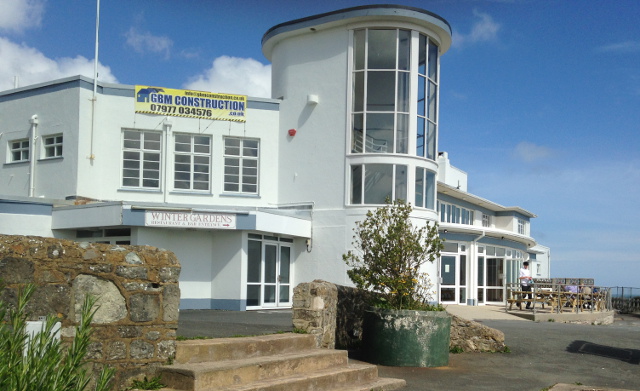 When the last administration at the Isle of Wight council transferred Ventnor’s Winter Gardens into the hands of a private owner for £1, part of the agreement was that owner committed to a multi-million pound redevelopment of the building and site.

The headlines at the time were all about it being expanded to include a hotel, complete with glamorous visuals of how it would appear.

There’s no denying that it’s been painted – you may recall students from the College were brought in for work experience to paint the building. It’s also open to the public as its owner Kevin Sussmilch, promised it would be open by summer 2014.

With the 18 month contractual deadline for the development to be ‘substantially complete’ now passed (that was in mid-July), OnTheWight posed a number of questions to the council.

No definitive answers
What has become evident through asking questions is that the Isle of Wight council still appear to be shy on answering simple questions about the future of the Ventnor Winter Gardens.

It took two weeks for the council press office to respond to our questions, sending just a brief comment from Cllr Jon Gilbey, Executive member for Finance and PFI, who failed to answer many of the questions posed.

“The council has until 10 January 2015 to exercise its option to return the building to its control if the works have not been substantially completed.

“We will review the extent of the works undertaken and will make a decision about any appropriate action in that timeframe.”

On previous occasions of asking what the council will do if the promised development is not carried out – such as whether they would impose penalties – they simply replied that the Cabinet will decide once the 18 month deadline is up.

A spokesperson for the council confirmed that the quote from Cllr Gilbey above “is the response to your questions” and he would not be answering each of them individually.

“The document which transfers the freehold to the Hambrough Group provides that it must, ‘commence and substantially complete the development insofar as it relates to the building within 18 months of the date of the transfer’.

“If the refurbishment and development of the Winter Gardens is not substantially completed within that time the council has an option agreement to buy the property back for the greater of £1 or an amount agreed reflecting the investment made by the purchaser.”

Those plans included in excess of £1.3m initially being spent on the renovation and development of the venue, with several million pounds being spent in the longer term.

Plans on hold
In December 2013 Kevin Sussmilch suddenly announced that despite showing proof of having the money available to the council in 2011, “due to unexpected changes within the business and the current economic climate it has meant a delay to the planned refurbishment and development of the site,” adding that, “plans have been put temporarily on hold”.

The day before Mr Sussmilch made that announcement, Cllr Jon Gilbey, told OnTheWight,

“The lack of work undertaken at this prime site in the heart of Ventnor is unacceptable and not what was promised by the developer when it acquired the Winter Gardens from the previous administration.

“It is clear to me that it has broken promises made for the future economic prosperity of the town and I share the frustrations of local residents and businesses at the lack of activity.

“With the July deadline approaching fast, I would hope that we will start to see a start to the promised development of the building in the new year.”

Cllr Gilbey seemed previously concerned about the July deadline approaching, but now talks about possibly taking six months in which to review the situation.

The other bids
By awarding the contract to The Hambrough Group, the council rejected two other shortlisted bids. A commercial bid and a community bid, both of which intended to carry out quick remedial work and reopen as soon as possible – with more important structural and renovation work taking place later in time.

Instead, the Ventnor Winter Gardens sat empty for three and a half years. Now reopened by The Hambrough Group, little more than was planned by both of the other bids has been carried out.

newest oldest most voted
Stewart Blackmore
It seems that some members of the IW Council Executive are having trouble keeping to the promises of transparency which got them elected. I agree with your report; there was never any mention of a 6 month period to ‘review the situation’. Whilst it is good to see the WG open for business, the bald fact is that there is no difference in how it looks now… Read more »
Vote Up00Vote Down
Stewart Blackmore

I omitted to mention in my previous post that, if there had been proper scrutiny of the last administration, the decision to sell the WG would have been called-in, and it’s ironic that the same councillors who rubber stamped that decision (Whittle, Stewart, Hutchinson etc) called in the decision to lease Salisbury Gardens to Ventnor Town Council.

Double standards and opportunism just doesn’t do it justice.

Let us assume that Mr Sussmilch has spent £250k on all those architects and engineer’s plans, and recently, emulsion paint. Where do you think the IOWC could find that much money to buy back a building they did not want in the first place. Why make a decision now when you can make it in six months time?

Here’s a good reason. The sooner they get it back, the less of Mr Sussmilch’s expenses the council will be exposed to.

Well said Stewart, my sentiments exactly. Tried to add my vote to your comment but for some reason it won’t take it.

I’d want to see the full details of the sale agreement before commenting. Is that in the public domain, to download?

You can see the conditions that the Council put on the transfer by downloading the title deeds from the Land Registry site.

Well said Stewart. Mr Sussmilch has taken the council and locals for mugs for long enough. I would like to see some positive action from Councillor Stubbings on this and while he is at it he can sort out the ridiculous subsidy of £100,000.00 a year to keep the pointless harbour running.

Ventnor gets stuffed whatever happens,,, but so long as someone makes a few quid then it’s ok apparently.

There are times I could genuinely scream with these ‘fiascos’ why on earth can’t someone see the need and sort it out, END OF!

I wonder, if the council’s legal officers made sure the “We’ll buy it off you for what you spent” contact they apparently signed off, also includes a balancing “Any of the money that the WG has taken as income, will be taken off the total amount” clause? It would only be right surely?

Vote Up00Vote Down
frankiblueeyes
The building is an iconic part of Ventnor sea front that could be amazing with the right people behind it! By that i mean the LOCALS who wanted it in the first place to keep it in our control and not be sold off for profit only rather than the community It is obvious some of our LOCAL councillors have forgotten this!!!! As for the state of… Read more »
Vote Up00Vote Down
milly
Well, you are right folks, the little paint job makeover by the students wasn’t going to convince us was it? – No. But the place re-opened. It just goes to show they were conning us, it needn’t have closed in the first place. When is the hall going to be available again? Since the place opened, with the high prices,the tourists must have recouped the money for… Read more »
Vote Up00Vote Down
Stephen
Good reporting thanks. I hope some answers emerge in time. But as somebody else said, I will be surprised if the council want or can afford to buy it back including the costs that might be claimed to have been incurred in addition to the £1 purchase price. There is just one very small part of the report that I would challenge. “Now reopened by The Hambrough… Read more »
Vote Up00Vote Down
ACW

“At least one of the other bids would have seen more in place and operating, much faster”

and I would have thought more efficiently!
The fiasco of the recent cancelled show yet another example of mis-management.