Jonathan Dodd returns with his Sunday column. This week he talks music. Vinyl, cassettes, CD and streaming, but would you lend him your Are You Experienced LP? 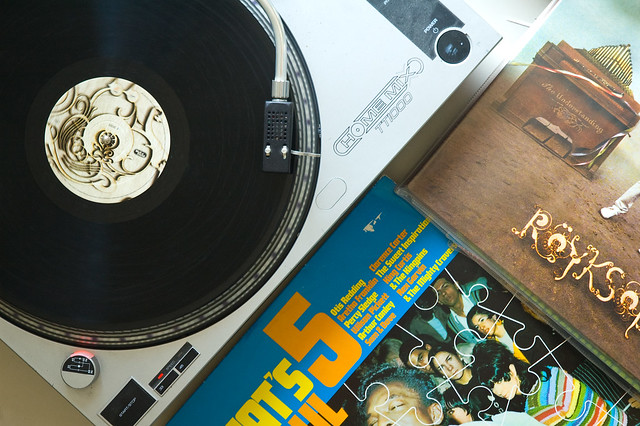 I used to hate lending my records to people. No, that’s wrong, I didn’t hate it, but it was a worry and a quandary for me. I suppose it was something to do with the climate in which I grew up. Nobody had very much then, or so it seemed. There was never much spare money, and the whole concept of credit was far in the future. If you wanted something, you saved actual money until you had enough, and then you took it to the shop and exchanged it for what you wanted. Then you would have to wait a while before you could save any more money to buy the next thing, and so on.

It wasn’t just that nobody bought very much, or that there wasn’t the variety or even plethora of stuff out there you could actually buy, as there is now, but it was the needing to save your money, shaving it off the bulk of all your other expenses, that made the actual decision-making quite lengthy, so you had to be sure that you really wanted the thing you wanted, or that it was the right version of it. I remember once spending a long time looking at all the transistor radios in all the shops I could visit, and researching the one I wanted above all others. I was quite sensible, estimating what I thought my relatives might be able or willing to afford, and I came up with one that I thought was very reasonable.

As much as someone else deserved something else
I remember I write it all down on a piece of paper, with the name and price, and which shop I saw it in. Of course, when I was given a radio, it wasn’t that one. Nobody explained, but I sort of understood that my choice was too expensive, or that I didn’t deserve the one I wanted as much as someone else deserved something else. It wasn’t a lesson I learned willingly or easily. In fact, I’ve only just realised that this must have been the case, and my bitter resentment has been festering for all these years, until now, when I’m actually giving my parents the benefit of the doubt, rather than still harbouring resentment in my heart. I’m amazed how long such negative stuff can last, and at the same time, relieved that it’s possible, after so many decades, to revisit and make amends. At least in my heart.

So my records were precious objects. I had a cloth I wiped them with, and I became an expert at handling the large shiny disks without ever placing fingerprints on the flat surfaces. I had a tiny brush that swept the record, just in front of the needle, a bit like vinyl curling. I was careful to take out and put away, and never to leave records out of their sleeves or on the floor. The fact that I knew people who treated their own records with disdain and careless abandon shocked me. Even worse was the way they would drop the needle, or casually scratch the surface. One false move and the record would remind you of your carelessness for ever, either by skipping a groove or getting stuck, or just that unwanted ‘click’ every two seconds or so. That used to upset me terribly.

But would you lend him your Are You Experienced LP?
Inevitably, when people came round to listen to records, someone would want to borrow one. This was when the finer points of social etiquette were really learned. You had to asses the person first, as a human being, and as a friend. How would they treat your precious record, once they had it in their hands? Did you trust them to look after it, or did you suspect they would trash it? Would they stand cups of coffee on it, or give it to someone else to take out and play? Would they even give it back, ever? I was in agony every time. I made some bad decisions, of course, finding a huge scratch on the back of one of my favourites, and having it denied to my face – “It was like that when you handed it to me!” Once one of my favourites disappeared and I never saw it again.

On the other hand, someone once bought me a brand new copy to replace the one they accidentally stepped on, but this was an exception. The rule was, sadly, one of awkwardness and foot-shuffling. Nobody had spare money to buy records to replace one that was broken or scratched. We all had huge lists in our heads of the records we wanted to buy next, and our minds were constantly arranging and rearranging those lists, until the money was in our pockets and we were confronted with the cruellest decision of all – which record to buy when you want twenty but can only buy one. So I’m not surprised that records were hardly ever lent, and then only to well-known and trusted friends. This became the currency of friendship. “Yes, he’s a good bloke, but would you lend him your Are You Experienced LP?” I suppose as an absolute rule, that would still stand now.

No scratches and no shelves to reinforce
As time went on, things changed. Money became easier to find, and technology moved on. Cassettes were a godsend, because you could record your records onto tape and hand them to friends without a care in the world. Your records stayed safe on their stuffed shelves, and you could listen to your cassettes anywhere, especially after Sony invented the Walkman. It became a real effort not to buy cassettes instead of records, and then you took the plunge, after a couple of bands released new albums on cassette only. And then cassettes moved over to CDs, and then you could download music or rip your record/cassette/CD collection, and now you just pay Spotify every month and it all gets streamed into your ears, pristine-clear, with no scratches and no shelves to reinforce.

I find it interesting that this is the moment when we all start buying records again. I understand the prestige and pleasure of the objects, and the practice of listening to a whole album, Side A followed by Side B, and there are the rituals, but I’m not sure whether it’s a fashion or a real thing. I won’t be buying records myself, because I’ve gone through the whole process and I don’t want to relive it all. I love the availability of music nowadays, and I’m addicted to shuffle. There’s no greater pleasure for me when listening than to have no idea what’s coming next, and I love the weird juxtaposition that happens all the time.  I very rarely listen to a whole album any more, from start to finish.

There’s no NEXT button on the radio
I won’t do the Spotify thing, though. Maybe not yet, but I have to be convinced. I know you can select a bewildering number of genres and playlists, and the whole of recorded music is there, but I hang on to the idea of a collection. Either it’s something I love, or it reminds me of something or someone, or some part of my life, or it connects me to times or places or films or concerts, and it all has an emotional resonance for me personally. I never liked pop radio. Yes, I often heard something that I would go on to love and collect, but there was also so much I disliked, or felt nothing for, and there’s no NEXT button on the radio. I feel that Spotify would add a layer of music that I didn’t choose, and I would be pushing the NEXT button all the time.

I like to collect what I choose, or what is recommended to me by friends I trust, and then play it in the way I choose. If only all of life worked like that. I know there’s a lot of music out there that I would love, but I can’t just import a thousand hours of it without listening and connecting to it first. I once worked next to a strange man, who told me he collected music. It turned out he collected cassettes. He had a room full of them. He knew how many thousands he had. I asked him how he chose which one to play. “Oh no! I never play any of them!” he explained cheerfully. “I just like to collect them. I used to collect records, and I’ll soon start to collect CDs. One day I’ll listen to them all. But not yet.” Needless to say, this spooked me a bit.

We’re going to miss at least some
I once read that all the art galleries and museums hold at least ten times the number of items they could possibly display. They don’t just swap pieces of art, they’re constantly making decisions about which pieces of art we’re going to be able to see or not. There’s nothing sinister in this, it’s just supply and demand. You might have a favourite painting and you’ll never get to see it. Luckily, music doesn’t work this way. You’re limited by the storage you have, your ability to collect it, and mainly by time. If you assume that an album is about 40 minutes, in old-time LP terms, and you listen for eight hours a day, that would be about 12 albums a day, 84 a week, 4368 a year. In 50 years that’s 218,000 albums, if you never listened to any of them twice, and I’m pretty sure there are a lot more albums out there than that. So we’re going to miss at least some, and probably a lot, even if we dedicate a whole life to listening.

I can live with that, as I can live with all the friends I’ll never meet, houses I won’t live in, countries I’ll never visit, or books I’ll never read. And I’ll hope that my choices, however they seem to you, will be choices I make because I genuinely like them. I hope I’ll never get my love of music tangled up in fashion, and I hope I’ll always be making those choices, even if I sometimes get it wrong.

In this way, music can capture the essence of Life itself.

If you have been, thank you for listening.