Jonathan Dodd: The Past is a foreign country

Jonathan Dodd returns with another thought-provoking Sunday column and this week is talking about the past. Something we all have and something that affects us all in one way or another. 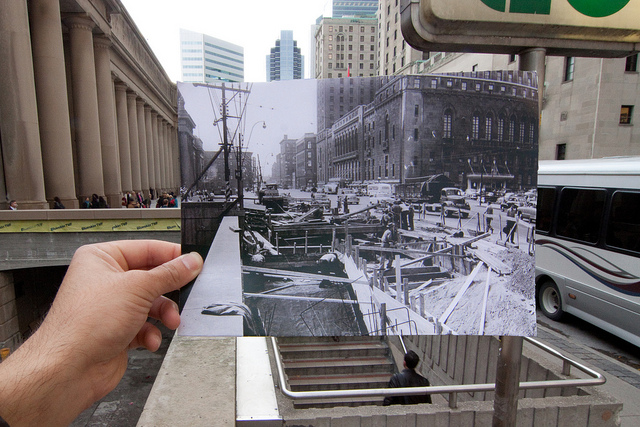 Sometimes I find my thoughts turning towards the Past. I don’t mean the occasional thought that occurs here and there because a memory is jogged during a conversation, but I mean that whole lost continent that contains the whole of my Past. Sometimes it feels like it’s a cloud that has dispersed completely, and sometimes it feels like it has all been stuffed inside an enormous backpack that I’m cursed to carry around everywhere I go.

My cat Binks doesn’t have any idea about the Past. I look in her lovely blank eyes, and there’s no awareness of mortality there, or planning for the future, or learning lessons from the Past. But I know, even if she doesn’t that she is still affected by the Past, in the way she reacts to certain gestures, or the things she avoids. She’s a rescue cat, and although we were given certain guesses about her age and previous life when we welcomed her into our home, we have no idea what happened to her or for how long before that moment.

I go looking for her, just in case
Binks has been with us for many years now, and she’s a venerable old lady. She has changed from being very standoffish at first, reacting strongly to quick gestures or loud noises, to the point where she’s now very affectionate and likes our company very much. I’ll never tire of being amazed at this wonderful connection we humans are capable of creating between ourselves and other species. I know Binks is very old, and every morning when I get up, if she’s not waiting for me at the bottom of the stairs, demanding her breakfast, I go looking for her, just in case.

One day Binks will become entirely part of my Past, just as I’m presumably part of the Pasts of many people with whom I’ve interacted over the years. I have no more control over any of my appearances in the drama stories of their lives than they have over their appearances in mine. In fact, much of this stuff occurs off-stage, so it probably continues to influence our behaviour in ways we’re not even aware of. I know this, because I’m occasionally jolted by something that I do which reminds me powerfully of one or other of my parents or my school-life, or incidents in my own growing-up. These memories can be so powerful that they take my breath away.

I usually find this oddly comforting
I’ll never know how any of this works, and through my life I’m often made aware of how little I understand about myself or anybody else, but I usually find this oddly comforting. I know too many people who think they know everything they need to know, or who think they’re right. Here’s a handy hint. People who think they’re right are usually as wrong in direct proportion to the strength of their convictions. Your only hope is to think for yourself, and admit that whatever conclusion you come to is, at best, a forlorn hope. Didn’t someone try that before?
I’m not talking about absolute truth, or any particular way of behaving. It’s far more about knowing what we’re doing or what we believe, and spending enough time thinking about it to be able to say why we think we’re doing the thing we’re doing or why we believe the thing we believe. If you see someone daubing paint on a wall, and ask them what they’re doing, there is a qualitative difference between the person who’s making Art, or a political point, or racist hate slogans, or who won’t stop to answer because they’re too busy giving you a kicking. If I was a graffiti painter, I’d be trying to get people to think, and I’d explain to anyone who asked what I was doing and why, and I’d be encouraged by those who engaged with me. I’d be disappointed by those who walked by without even noticing, let alone responding, and I’d become angry with those who shouted abuse, or worse. I think if the Past was a person, he or she would feel much the same. Watching Germany invading Russia in 1941, the overwhelming thought would be “Oh no! Didn’t someone try that before?” I think the Past would already be shaking his or her head because nobody took any notice of warnings that began over 50 years ago over pollution and overpopulation, that were ignored over and over again. I think the Past would be worrying about the loss of general knowledge, leading to the loss of lessons previously learned and now forgotten. Over and over again.

More like falling in a lake than taking a journey
I’m not sufficiently self-important (I hope) to suggest that the new generations aren’t capable of dealing with all this, or working it out for themselves. They will certainly have more knowledge and resource available to them than was ever available before. I hope they succeed, obviously, and I wish them well. I am, at the same time, bitterly disappointed with my own generation, who have wasted so much time and resource on so much that was trivial and wasteful. I also recognise that the generations previous to mine had to live through two world wars that were far more wasteful, and which were not prevented by a set of leaders who weren’t much more capable than those we seem to have lumbered ourselves with right now. And I worry that we’ve essentially not learned anything from any of that.

Our relationship with the past is always a difficult one. Every memory in there has associated emotions and attitudes attached, often in the heat of the moment, or forged by the person we were then rather than who we have become. Would you still care as much about the Bay City Rollers (either way) as you would now? Would the person you are now study harder at school and be less likely to turn against your teachers? If we could go back, we might think differently, or appreciate different elements of any situation. But so many of us have no more than a vague idea of this Past thing. Visiting it is more like falling in a lake than taking a journey to a specific destination, or even following a map.

The Past keeps changing
The other thing that causes us a lot of confusion is that the Past keeps changing. We do this by remembering something, and reacting to it in a different way. A lovely holiday taken with a first family can be remembered with joy, but if there’s a divorce, it might become viewed through a filter of anger and disappointment, and, even worse, those feelings stick to the memory as well, and become part of it, even though that reaction might have been years later. If we have built up the habit of thinking and considering things, we might be able to separate all of this, so we could see the Past clearer, but that would involve some internal discipline and a lifelong desire to learn. I happen to think that we have big brains, and we’re perfectly capable of doing this, and it’s a mystery to me why so many of us don’t make use of our intelligence. Just because it’s easier not to think, that’s no excuse. Saying that we never learned to think at school is only an excuse too, because there are lots of people who had the best education that money could buy, but still learned nothing of any use. I know Binks can’t do any of this, but I know her very well, and I’m pretty sure that if she had a larger brain she would agree with me. At least as long as I keep feeding her.