Relief from Ventnor residents as planning consent for a six building on the sea front runs out.

A huge sigh of relief is echoing around Ventnor as word spreads that the horror of a six storey building on the seafront, given planning permission five years ago, will not be going ahead. 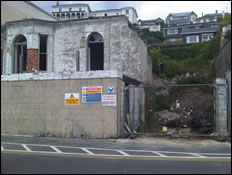 Planning rules give the developer five years to start the building project once permission has been granted.

Happily this permission has now lapsed and the head of planning at the IW Council, Bill Murphy, has confirmed this to Ventnor East County Councillor, Chris Welsford.

Much work has been carried out behind the scenes by Cllr Welsford and Cllr Robinson in an attempt to save the Esplanade from this over-development.

Fears raised
Local fears were raised when the previously untouched site started getting visits from builders and scaffold was constructed around the building.

There were a number of planning conditions attached to the original permission, so works on the site should not have started until these had been satisfied.

Last weekend the developers of the site made desperate last minutes moves to try and get works started by attempting to get the building demolished and the footings laid for the new building.

Neighbourhoods were most concerned at this as they said their properties were surred up by the walls of Le Veness.

What now?
Times are very different now, from when the IWC planning officer, Andrew Pegram (now departed to another authority), described the proposed six story building as “a minor application.”

Many in town are now aware that the voice of the public can make a difference to the way the town develops, rightfully becoming involved with maintaining the fragile beauty of Ventnor.

Alongside this, planning controls have tightened with the introduction of the Conservation area in 2006.

Community use?
The Le Veness site has been in a dilapidated site for a many years and residents would like to see it turn into something that adds to the area rather than dominate it.

Those familiar with the area say that the site has problems, such as an underground stream running through it and that the site in unstable, so any construction on the site would be at-best difficult and very expensive.

More than a few people have suggested that turning the site in to something to the benefit of the residents and visitors would be gratefully appreciated, such as donating it to the town, it would make a fantastic area for a small children’s playground.

Perhaps the owners could be given an accolade such as the ‘keys to the town’ in return.

newest oldest most voted
Christopher Bonney
Not entirely sure that the owners of this valuable piece of land are quite ready to hand it over to the town, even for a super-douper extra big thank you with a 99 stick on top of it. However, it may be time that existing legislation is exercised to get the site developed or compulsorily sold off to a ready-to-go developer. The spring below it should be… Read more »
Vote Up00Vote Down