Letter: Bob Seely should be calling out and rejecting this politics of hate and division

Vix Lowthion says the Isle of Wight MP, Bob Seely, must call out and overwhelmingly reject the politics of hate, division and stoking up of emotions against each other, “Instead of arrogance and anger, we need humility and hope”. 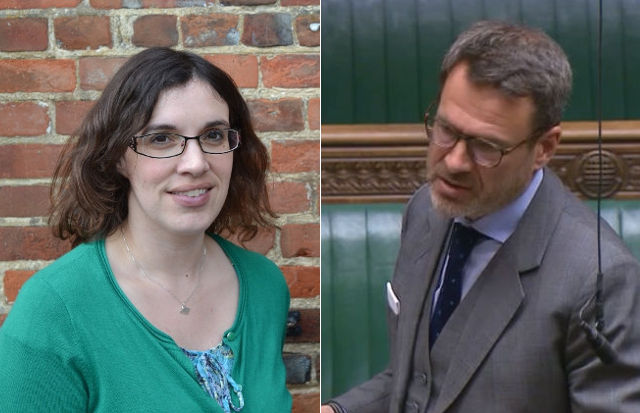 There was a time – a more innocent time – when the world saw the UK through the eyes of our films stars and comedy characters: Mr Bean, Norman Wisdom or that bumbling, charming, sweary Hugh Grant with the rakish floppy fringe. Boris Johnson, our current Prime Minister (at the time of writing), has spent his entire public life embodying a composite of all these characters in order to project himself up to the highest office in the land – except that of being a King.

And like those disastrous British Kings of the 1600s (Charles I and James II) Johnson has believed in his own hype and his own poor abilities, whilst others around him saw him for the arrogant rogue he really is.

Seely supports actions of “rogue Prime Minister”
Sadly, the Isle of Wight’s current MP Robert Seely is not one to see Boris Johnson as the charlatan he is – in my view a liar who was judged by the Supreme Court as misleading our Queen and misleading the people of our Country. Whilst other MPs used their precious single question in the House to call for calm and considered debate, Bob Seely instead chose to fully support the actions of a rogue Prime Minister who those of the opposite side of the house had exclaimed “should be in jail”!

“The more the people – my folks on the Isle of Wight – see the obstacles put in his way, whether political or the behaviour of these judges, the more they are willing him to stick to the cause to deliver Brexit on 31st October and restore trust in politics.”

We are not “Your folks”
No, Bob. We are not “Your folks” on the Island, and we do not support your government, your Brexit or your values of division. It is utterly irresponsible for a Prime Minister to bandy about words such as ‘betrayal, surrender act and traitors’, when many MPs have received death threats and I myself have been shouted at in the streets of our island, purely for standing up for those who disagree with the actions of Mr Seely and his gang.

Bob Seely must call out and overwhelmingly reject this politics of hate, division and stoking up of emotions against each other. Instead of arrogance and anger, we need humility and hope.

Where is the humility and respect?
We were always told that the Conservative Party was the party of law and order, calmness and respect. That has now been completely overturned. Boris Johnson has shown no humility or apology or public acknowledgment that he has behaved unlawfully and brought shame and embarrassment to the Queen and our Country.

He is not my Prime Minister. I am proud to stand against his disastrous premiership, and the schoolboy politics of Mr Seely. When the election comes, we have to consign this disgraceful and frankly horrible few years of hate to a distant memory. And to do this, we must only use the language of humility and respect.

31 Comments on "Letter: Bob Seely should be calling out and rejecting this politics of hate and division"

newest oldest most voted
grumpymoo
Oh my gosh! This is just hilarious. This letter is beyond hypocritical from Vix. Firstly, division and hate. Have a word with yourself. I’ve seen some of the comments you’ve made and supported on social media, ‘against’ leavers and anyone who isn’t far left. They aren’t pleasant. And guess what, we are ‘his folks’ on the island. He is our MP. In case you forgot, he was… Read more »
Vote Up45-26Vote Down
profoundlife

Vix’s letters have a theme of unity, but only around her view of the world. That may be where she’s going wrong. She wants to call out division, but only have remaining views (literally!) on her side.

For the record, Vix, King isn’t an office of state either.

Vix, you don’t have to worry about any of this love, you are unlikely to get anywhere near being elected as an MP

Vote Up35-20Vote Down
Steve Goodman
The possibly of that being true in an unpleasant place where voters prefer patronising people to be in power is cause for concern. In a more civilised society, nobody would need to be distracted by the bad-tempered, be they OTW commentators, Boris, Bob, the big baby blimp-inspiring Trump, or any other bilious being in government here or abroad. Those who are paying attention are much more worried… Read more »
Vote Up9-11Vote Down
ohnhai
Really? Well you are not paying attention to the polls are you? The latest Survation poll (25th sep) has Cons on 31.6k Grn on 22.9k Brx on 17.6k LibDem on 14.29k and Lab on 10.47k And as the other main polsters (yougov, Opinium, ComRes) are all showing similar numbers despite their differing methods and have been consistent over the last few months, this gives a reasonable amount… Read more »
Vote Up6-8Vote Down
grumpymoo

Ohnhai, do you have a link for those figures please? Is that just for the IOW? I can’t find a single source that puts the greens in second? Would really be interested in taking a look. Thankyou. :)

Why have I got a downvote for asking for info? Genuinely interested!

Sure. All here… select a poll and then click the island

Thanks, that’s great. I’ve not been able to find one that does by each separate area before. Appreciate that, thankyou.

That’s not a survey, though. It’s an extrapolation of data and I think any election will show the flaws in it.

But it’s consistent across the pollsters and has been stable For months . That alone is cause for mark!

What we witnessed yesterday……attack is the best form of defence

Evidently, the once respectable cons. didn’t defend the party from the divisive kipper/ brexit attack, but chose to surrender instead.

Boris is trying to do what we asked him to. The other parties are not. However I am not one of Robert Seely’s folks and never will be. His sort need to go.

So who is this “we”? It certainly does not include me. There may have been a majority for “leave” (without any further description at the time) out of the number of people who voted during the referendum, but that does not mean that this represents a majority of the population, quite the contrary.
I object to the propaganda.

I expect Bob to condemn the ‘humbug’ response given by the PM yesterday. Unfortunately, as his constituent, I know Bob won’t condemn it at all, and I won’t hold my breath in the hope he does condemn the PM. Boris Johnson ensured that he had bought Bob’s silence with the promise of ‘Island status’.

Humbug is exactly what it was. Implying that Boris should be held responsible for threats that she herself receives from the public. So the language used in Parliament hurts her feelings? Go get another job if you cant stomach it.

It’s not about blaming Boris for being responsible for threats to others, it’s about being civilised towards other human beings! ‘Humbug’ was a dismissive response and didn’t acknowledge the severity of a situation where MPs and their families (on both sides) have received threats. You cannot possibly defend that, can you ukdave?

He was right to be dismissive of it. “Humbug” sums it up pretty well. We didn’t get to hear the rest of his response unfortunately as the Speaker was forced to intervene due to the hollering and barracking from the Labour/Lib benches. Very “civilised”.

You’re advocating a position that threats to politicians and their families is something unworthy of condemnation. Maybe have a think about that for a moment…

She didn’t debate the rights and wrongs of alleged death threats. She wanted to discuss the implication that the language Boris used should be considered a factor.
You have delivered a straw man argument. Perhaps have a think about that “for a moment”.

The point stands that Boris (and now Bob) have an opportunity to condemn threats to fellow politicians, and neither one of them has done so. The point also stands that our PMs choice of language stokes the division that fuels such threats. “Humbug” doesn’t cut-it.

I also think it’s easy to find the records of Boris’ long history of lying.

Vote Up8-10Vote Down
Davidgg
The suggestion was that the words Boris uses such as “Surrender Act” somehow incites violence towards MPs. Since (a) the act dies surrender the UKs ability to choose a leave date then surrender is an correct description;and (b) threats to MPs predate Boris’s comment’s, it seems entirely apt to respond to that suggestion as Humbug. Boris and Bob have nothing to apologise for, and Vix should stop… Read more »
Vote Up11-5Vote Down
Steve Goodman

Sadly too late for the once respectable cons. to stop their surrender to the far from petty costly divisive damaging brexit/ kipper humbuggery.

Reading all the Comments, it’s going to be a Great Election. Thanks to Vix and all those who have contributed. Not many letters get so many replies…

Vote Up7-5Vote Down
carabez
When you examine the background to all this you see plainly that the nastiness comes mainly from the Left. They are fundamentally vicious and underhand in all that they try and do They have no belief in democracy or free speech, Their leaders are communists in all but name. Corbyn’s manifesto, if implemented, would take us back to the dark days of 1975. Joe Swinson is no… Read more »
Vote Up19-26Vote Down
Nitonia
Read quotes from Nigel Farage, Tommy Robinson and Paul Nuttall and then repeat the claim that the nastiness originates from the left. I’m also interested in how you think the PM is interested in democracy or your free speech because he’s really not you know. Unless you went to Eton and Oxford in which case he is. I wouldn’t argue with your point that the left demonises… Read more »
Vote Up14-13Vote Down