We can expect to see the hoardings be erected around the Winter Gardens in the next month says a spokesperson from The Hambrough Group. 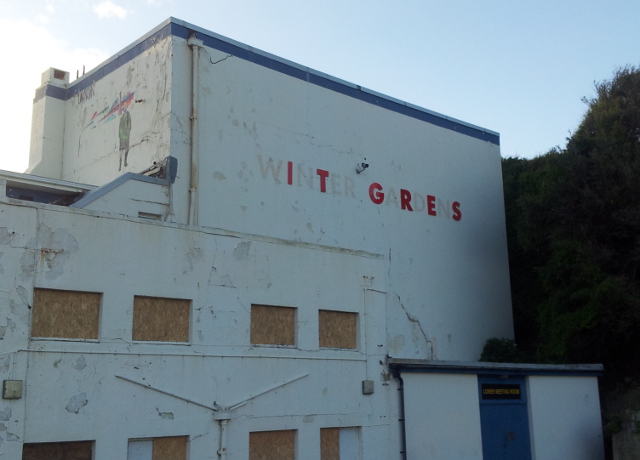 Readers will remember that a meeting was held last month between Kevin Sussmilch, owner of The Hambrough Group, and Ventnor Town Council’s Mayor, Steve Stubbings and Clerk, David Bartlett.

One of the outcomes of the meeting was that The Hambrough Group committed to erect hoardings around the outside of the Winter Gardens to improve the safety of the disused site.

A spokesperson for The Hambrough Group confirmed to OnTheWight yesterday that a local contractor has been commissioned to erect hoardings around the building.

Unfortunately a date was not known of when it would happen, but it was hoped to be within the next month.

Hambrough are not very good at coming up with dates are they?

Vote Up00Vote Down
tryme
I hope there’s going to be a bit of consultation about the appearance of the hoardings: they need to look rather cleverly connected to the surroundings, or else there’s scope for the place to look even worse for some time, no doubt. Or maybe put up plain hoardings and have a competition for some artwork to go on it? (Likenesses to the previous administration at County Hall… Read more »
Vote Up00Vote Down
woodworker
I beleive Sussmilch said that the hoardings will show the planned development of the winter gardens. Still, they could spend all their time consulting and nothing would ever get done would it. Its some temporary sheets of wood to hide the site – be thankful that he has agreed to do it. A consultation is not needed. Next someone will be asking for public consultation about what… Read more »
Vote Up00Vote Down
Sally Perry

I think that was a suggestion (what might be on the hoardings) by Cllr Stubbings rather than what would definitely happen.

Vote Up00Vote Down
Mike
Wow! Over 2 years and the only visible sign of progress is a hoarding to hide the eyesore they have left while they huff and puff about what to do next.Lets face it when Thompson left the HG his legacy was a white elephant for HG and now they are trying to find away to make a discreet withdrawal. All this guff about being committed to the… Read more »
Vote Up00Vote Down
steve s

My feeling, at the meeting, was that Mr Sussmilch embraced the idea of an ‘artist’s impression’. I sincerely hope that we don’t end up with bare chipboard!

I notice The Hambrough have taken to putting a little blackboard out on the pavement to try and entice people in for food. Our family have boycotted them for the past few years and I’m sure others have done the same. It is such a shame that Mr Sussmilch’s apparent arrogance is having this knock on effect.

Vote Up00Vote Down
watching you

Google ‘building wraps’ could be printed with he artists impression of the finished build. Would look much better than sheets of 8×4 all round it

Perhaps that would feel to the owner like too much committment…

Instead of dreaming about hoarding, take a look at the
latest reviews on the website http://www.booking.com/The-Hamborough
to find out what’s really going on. You’ll be shocked.

With respect to “Oldie” I would treat some of the reviews on hotels with a pinch of salt.I have never been in the Hambrough so cant comment but in general the reviews seem to be written either bypeople with an axe to grind or a shareholder in the hotel.

I recently stayed in a Brighton Hotel and the difference in reviews was startling.Some horrendous others the opposite.