Solent WASPI women took part in a day of action, raising awareness of their situation and calling on candidates in the General Election across the region to support their cause. 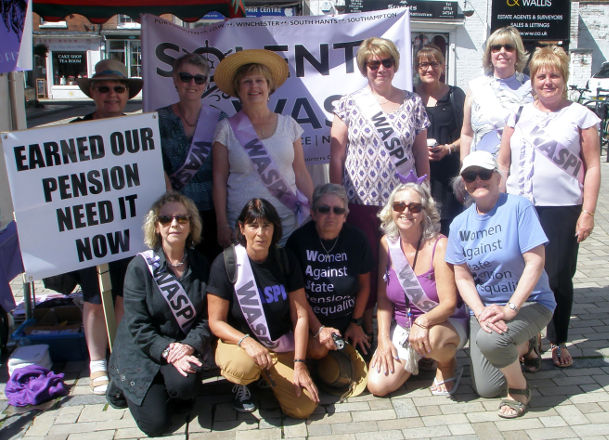 Members of WASPI (Women Against State Pension Inequality) have been calling on their local general election candidates to support their campaign.

Groups around the country, including the Solent WASPI Supporters’ Group, have invited candidates from all constituencies and parties to sign the WASPI Pledge that, if elected:

“I pledge to support WASPI and to work in Parliament to find a solution for the women affected.”

WASPI is campaigning for transitional or compensation payments for these women who were born in the 1950s.
Friday, 26th May 2017 was the WASPI National Day of Local Action; more than 140 WASPI groups around the country took part. The Solent Group held an awareness raising event in Romsey town centre from 11.00am-2.30pm. They began with a minute’s silence to remember all those affected by the Manchester atrocity on Monday, 22nd May.

Positive and supportive feedback
The group set up a stand in the Cornmarket with posters, flyers, Solent WASPI information cards and banners of various sizes. In addition, small groups walked around the town talking to residents about the campaign and handing out flyers.

“We were very pleased with the response; people were positive and supportive. Many people stopped to find out more and take flyers and cards.”

“We still find women who are totally unaware that the state pension age is no longer 60 and we met some on Friday in Romsey. WASPI agrees with the equalisation of state pension age but we take issue with the mismanagement of the process, which has caused great distress and hardship.”

Forced to sell homes
They pointed out that some women have been forced to sell their homes. Some have had to try to re-join the workplace, but unfortunately without much success as it is often very difficult to find a job in your sixties. Women who are on their own for whatever reason are particularly hard hit. For example, divorce settlements were often calculated on a state pension age of 60.

Consequently, many divorced women – particularly if they do not have an occupational pension – are finding it difficult to make ends meet.

Women with health issues
The SPA changes have had a major impact on women who are ill or suffering from long term health issues. Wendy, a Romsey resident, has recently had to cope with the stress of having cancer. She has no occupational pension so, in addition to the stress of her illness, she is being forced to sell her home.

This is because she has no other income and her state pension age has been raised not once, but twice. Wendy says what has happened to her has been devastating.

“We had hoped that Conservative candidate, Caroline Nokes – who was Parliamentary Under Secretary of State at the Department for Work and Pensions in the last Government – would be sympathetic to our cause but sadly she simply repeats the Government line. It is a line that is disingenuous and fails to deal with the issues.

“We hope that our presence in Romsey has let the 5,600 women in this constituency who have been hit by these changes know that someone is on their side.” 3.5 million women have lost out
The event concluded with Solent WASPI members gathering around Palmerston’s statue in Market Place. Carolyne and Shelagh said:

“3.5 million women have lost out, unfairly, because of the maladministration of pension changes introduced by successive governments. Our votes could significantly impact the election results, and we hope that our event in Romsey today will ensure that our local general election candidates here and all around our region will sit up and take notice.”

Solent WASPI Supporters’ Group ended the National Day of Local Action tweeting their thanks to all the general election candidates who have pledged their support.

If every woman on the Isle of Wight that finds themselves in the position of their state pension being moved – up to six years –
joined WASPI (£15 a year) then we maybe there could be an IW Group.