The race commodore’s yacht was lost to the sea on Saturday during Round the Island Race with crew rescued just seconds before the much-loved vessel sank just east of The Needles. 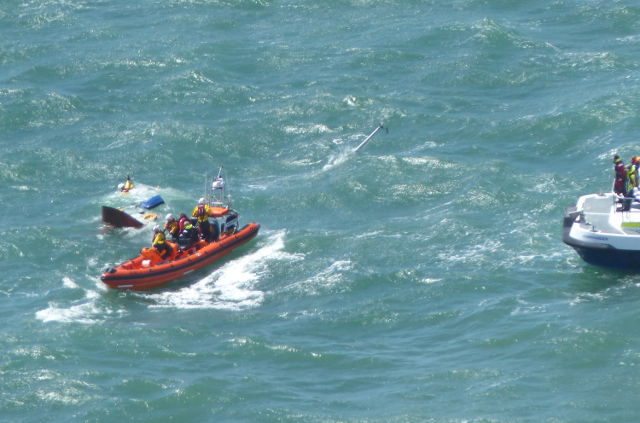 Richard from Yarmouth RNLI shares this news from the weekend. Ed

Rough conditions resulted in the total loss of a well known Isle of Wight yacht, Alchemist, during the JP Morgan Asset Management Round The Island Yacht race on 2nd July.

The Yarmouth RNLI all weather lifeboat raced to help her as she was taking on water rapidly. The Mudeford RNLI inshore lifeboat was also in attendance and rescued all the crew seconds before she sank in 17 metres of water just east of the Needles.

Well known racer
Alchemist was a well-known Junior Offshore Group (JOG) racer and had competed successfully for many years.

Her owner, Mark Wynter, is commodore of the Island Sailing Club, the race organisers, and was not on board. Her loss will be deeply felt by all the offshore racing fraternity.

Challenging conditions
The strong wind forecast resulted in the cancellation of all the smaller classes of yacht. Conditions south of the Island were challenging.

The Yarmouth lifeboat was called to no less than six incidents including the loss of a mast, damaged rudder, crew injuries and damaged hulls.

Great work by RNLI, but please be aware that Hampshire Police Marine Unit’s vessel Commander had already taken 4 of the crew off before the remaining 2 were rescued by Mudeford RNLI.

17 metres of water? Could we stick to feet and inches now please, or fathoms if you must?

Whatever the depth, they did say in the other place that it struck the wreck of the Vavarsi, how is that possible in so much depth? FWIW, the wreck is visible at low water.

Vote Up0-1Vote Down
R Farrington
Metres have been used to record depth at sea for several decades and charts marked in fathoms are extremely rare outside the US. Brexit or not, the maritime community is an international one and professional mariners are happy with metres for depth, but yards and nautical miles for measuring distance. The yacht managed to sail on several hundred yards after hitting the wreck – that’s how she… Read more »
Vote Up00Vote Down