Sister of the bride having a hen night was locked out and multiple birthdays were disrupted after too many tickets were sold for UB40 at the Gardens. OnTheWight’s been on site to try and get to the bottom of it. 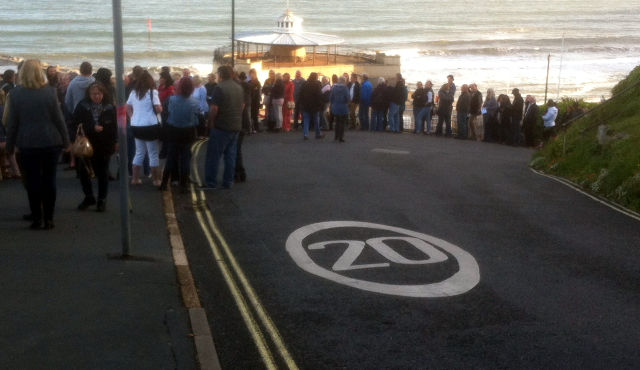 UB40 fans were left disappointed and angry tonight after being turned away from a gig at the Ventnor Winter Gardens, despite having tickets.

“It’s been mayhem,” sighed one of the bouncers a couple of hours after hundreds of people were turned away from the venue by the owner, Kevin Sussmilch.

200 punters turned away
At least 200 people were turned away from the venue – some with tickets purchased just yesterday at the venue itself – after tickets had been oversold.

After receiving several photos, calls and reports of angry ticket holders, OnTheWight went down to the Winter Gardens to see what was happening.

By this time, everyone who was going to be allowed into the venue was inside enjoying the gig, with just a few people hanging around outside hoping to either get in or their money back.

Talking with the owner
OnTheWight had a brief chat with venue owner Kevin Sussmilch, whilst he grabbed a hot dog outside.

He told us that tickets were available for sale in many places across the Isle of Wight, but not many had sold locally. Most were sold online, he said, and that’s where the problem arose.

During our discussions, several ticket holders returned seeking refunds, so we suggested Kevin deal with those and we’d catch up with him afterwards.

Queues formed early
Unusually for a gig at the Winter Gardens, Heras fencing had been erected, stretching along the perimeter of the site. Doors were not opened until 7pm so ticket holders were snaked in a queue as far down as the hotel on the Cascade, as can be see in the photos.

Among those turned away was a member of a hen night (sister of the bride). She told us that the 28 other members of the hen night – from around the country – had all gained access, but she had not.

We spoke to at least two others who’d bought tickets as birthday presents.

Move along please
As we arrived at the venue, two PCSOs were just leaving – moving instead to the public gardens overlooking the venue.

According to those running the hot dog van outside the venue, there was nothing out of the ordinary for police to be present at the gig.

Ticket holders who were denied access and returned a couple of hours later to seek refunds tell of another story. They claim there were at least eight members of the police present, and that there were a lot of angry people wanting to know why they couldn’t get in.

Only tickets that had been bought at the venue were able to be refunded on the night. Those purchased online would need to seek refunds through the outlet they’d bought from.

New capacity
One problem the Ventnor Town Council (VTC) had running the venue was the limited capacity. Bigger acts required at least 650 capacity in order to make it worth their while coming down to the Island. From memory, the capacity when run by the VTC was around 400.

Surprisingly, the promoter of the event told one unhappy punter that the venue now had capacity for 700 standing. We heard this repeated by a number of people several times.

Notice from promoter
A notice outside the venue from the promoter read,

The Ventnor Winter Gardens and Rock and Roll Enterprises would like to sincerely apologise for the refunding of a number purchased UB40 tickets for tonight’s concert.

This is due to the promoter and the venue over selling the concert above the safe capacity of the venue as stipulated by the health and safety officer.

This decision has been made purely for safety reasons and in no way reflects adversely on UB40 or their management.

We very much regret any disappointment and inconvenience caused to the affected tickets holders, whose tickets will be fully refunded.

I picked up a couple in Ryde today to take them to the hotel so they could get ready for this gig. They came from Portsmouth, so had paid for tickets, ferry, taxi, hotel etc. I hope they got in or this would have left a sour taste of the island in their mouths forever. Absolutely discusting.

You lot are turning into The Grauniad!! ;)

Apologies for missing off the ‘s’ from birthdays. It’s unforgivable.

Publishing this long article at 11pm (an hour of so after my bedtime) is absolutely no excuse for this horrendous mishap.

However, Sally, despite your “horrendous” mistake you bring us up to the minute news, typing fast as it all happens! Or should I say “happen”!!

Well done Sally. If people feel the need to pick you up on a minor typo you must be doing something right ;=)

Missing a ‘s’ must be accepted as a simple mistake. Just like the use of two (!) when ending a sentence.

A sense of humour is always handy.

Vote Up00Vote Down
CB500
I heard a rumour of 1300 tickets sold. Did anyone expect anything else from this guy? Remember the large amount of police at the punch up there last October? The police’s resources are stretched already without having to sort out this muppet’s mess. Let’s hope the council have the guts to remove his license. I’d just add that my principals have not allowed me to set foot… Read more »
Vote Up00Vote Down
Robbo

Went to the Champs concert there the other week. The sound was so bad I left after three songs.

Vote Up00Vote Down
Cleric and Dive

Shame you didn’t stay for the forth Robbo. Sound got it sorted out after the third!

will this be another nail in the coffin before sale to the public, at great profit.
what capacity should this be run at – was anything stipulated in the terms of sale

great reporting sally with at least one s

The IWC sale details claimed a capacity of 400, but we’ve asked them to confirm the latest capacity figures and will update when we hear back from them.

Strange, when one goes to the licensing register online there are no documents to review. Go to most other premises in town and they are available.

The council have said,

“An Isle of Wight Fire and Rescue Service spokesperson confirmed that it had recommended a capacity for all-standing of 700 people.”

I am very surprised there was no media investigation regarding this situation months ago as the event was quite obviously being oversold.

How was it “quite obviously” being oversold?

Vote Up00Vote Down
GJ
If it was knowingly oversold that sounds fraudulent. Hopefully the unsuccessful punters will receive their money back, but if the vendor of the tickets has other liabilities……. Surely the promotors must have known some time ago that it was oversold. You do not need a Maths degree to multiply 400 tickets x admission price = maximum receipts and when you get past that number there is something… Read more »
Vote Up00Vote Down