Dave is really looking forward to his new role in Scouting and is keen to hear from anyone who feels they can help in any way. 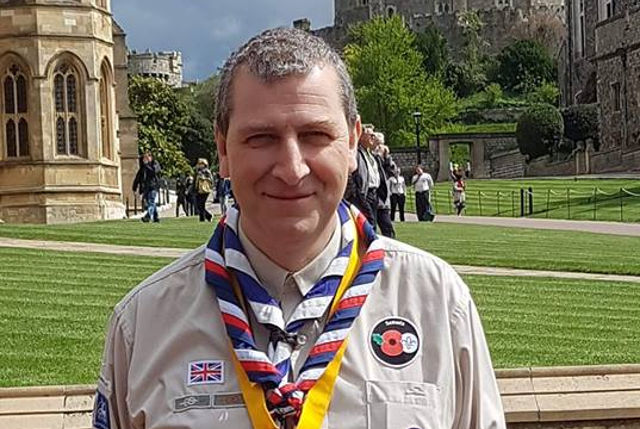 Malcolm shares this latest news on behalf of Isle of Wight Scouts. Ed

Dave will be succeeding Paul Saville who has been the County Commissioner for over five years and will officially start in his new role on 1st August. Island Scout Leaders will meet Dave at a social event to be held at Corf Campsite.

Since then he has held a number of roles, starting as a young leader and most recently acting as East Wight District Explorer Scout Commissioner, a role he had previously held in Hertford, before moving to the Island.

From tech to hospitality
Professionally Dave forged a career in IT, spending 18 years with CSC UK (now DXC Technology), before their redundancy programme finally caught up with him, at which time it was decided a complete career change was in order and moved to the Island and bought the Sandhill Hotel in Sandown.

Recruitment drive
Isle of Wight Scouts are just starting a major recruiting drive to attract new Scouts right across the age range, from six-year-old Beaver Scouts to adults. Dave is keen to get involved, saying that we have provided young people with opportunities for fun and adventure for over 100 years and we want to offer the joy of scouting to as many as possible.

Dave will also be jumping straight into the fun side of Island life as he’ll be joining the team running IW ScoutFest at Dick and Dom’s Great Wonderfest in August.

Dave is really looking forward to his new role in Scouting and is keen to hear from anyone who feels they can help in any way.