Strong exposure for the Island company in this major publication.

The New York Times remains a serious influencer in the US and, thanks to the Internet, globally too. 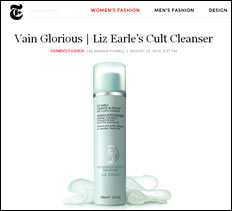 All the better for Ryde’s Liz Earle to have their Cult Cleanser appear on the NYT site. Good for the Isle of Wight too as it gets a mention as “England’s Garden Isle.”

The product is billed as “a cult favorite in the U.K.” which will appeal to many on the East Coast. It gets a good write up too, which will do good things for Liz Earle sales in the US.

As we all know, much of the media world works on PR and there’s a bit of us that wonders if US cosmetics giant, Avon – who bought the Liz Earle company back in March this year – had a hand in the appearance of the Cleanser in this major publication.

Either way, it remains a good thing for the Island, as long as Liz Earle remains on “England’s Garden Isle.”

Well done all. It’s always pleasing to see things from over here, doing rather well over there. I love these products!