The Local Care Board has made their recommendation to the Isle of Wight NHS and CCG about the future for NHS services on the Island. OnTheWight has initial responses from some IW politicians. 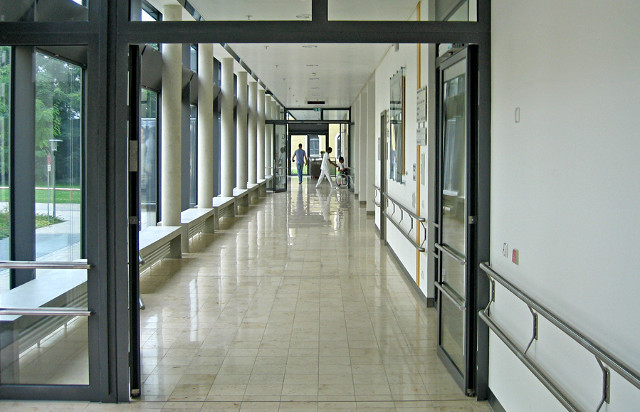 The Local Care Board have revealed their recommendations for the future of the Isle of Wight health service today (Friday).

As revealed last week, one of the options was to transfer all services except A&E and maternity to the mainland, however, it was not the final choice for officials.

Option four is being recommended, but the five options considered were:

Full details can be found in the report at the bottom of this article. 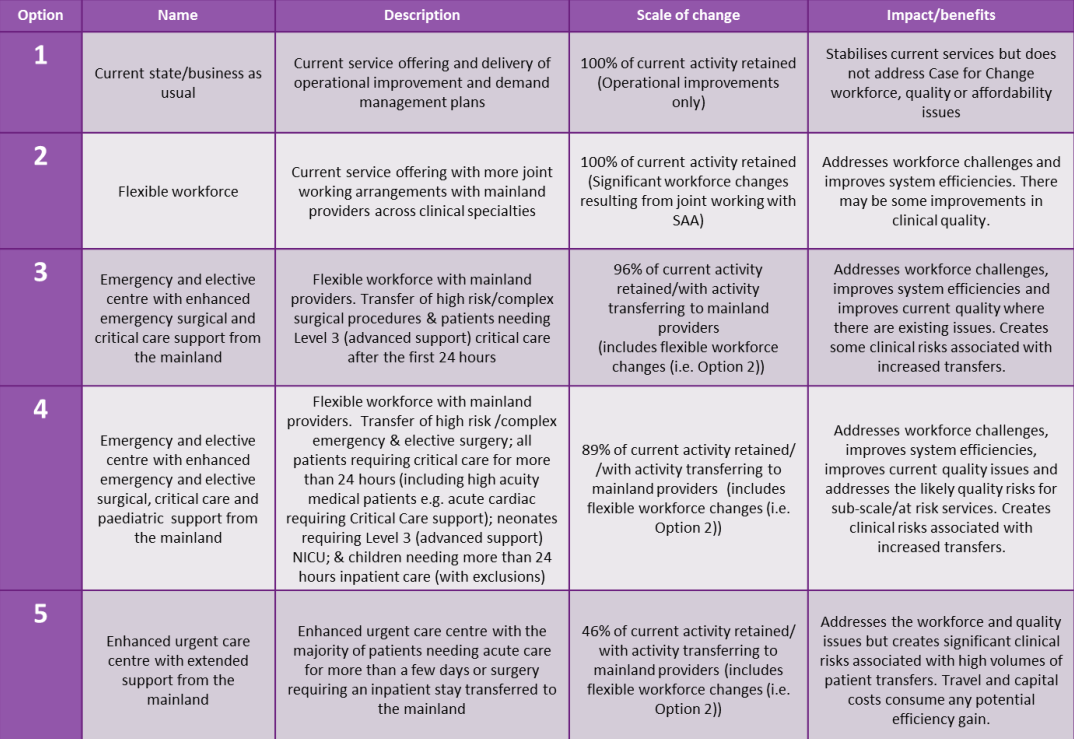 “I welcome this report. We need to be able to offer Islanders the very best quality healthcare, and we need to support NHS staff in delivering that healthcare. Overall, I want as much health treatment, delivered safely and to the highest standards on the Island, as possible. I give Islanders my word that I will defend services and fight for the best deal for the Islanders.

“I thank Maggie Oldham, Steve Parker and their colleagues for the work that they have done and are doing, and for the detailed report that they have produced.

“I also want to thank the Island’s NHS doctors, nurses and staff for the life-saving and life-enhancing work that they do.

“I accept the need to transfer a small number of specialist activities to the mainland, but welcome the ambition to have fewer patient trips overall across the Solent. Nearly 90 percent of current activity will be retained under the favoured option, Option Four.

“I am concerned that Option Four has previously included an approximate figure for bed losses at St Mary’s. I will be seeking reassurance on this, and I will be talking with the Trust further about some of the other implications of Option Four.

“I do accept that Option Three, which would see slightly fewer transfers to the mainland and 3,000 fewer journeys by patients, may not be currently acceptable in delivering clinical excellence. However, I will be further discussing the implications of both the preferred Option Four and Option Three and I would welcome some flexibility on this issue.

“We need to take the opportunity to return some services from the mainland to the Island, and we need wherever possible to use new technology and practises such as telemedicine to improve patient experience and care.

“I also want to see the Island as a centre of excellence in niche services, such as dementia care.

“It is vital for the Island to work collaboratively with mainland Trusts to ensure that our standards are second to none, to support and enhance the work done on the Island. Without this, we will not succeed in the ambitions outlined in the report. This element seems to me to be critical to our future success.

“I will continue to work with the Island’s NHS team to make sure that the Department of Health understands the unique challenges of providing world-class healthcare on the Island. I will be discussing this report with the Secretary of State for Health.”

“The Conservative plans for St Mary’s should be a wake-up call for Islanders. Our hospital is being subjected to death by a thousand cuts. The option being recommended would see more than 10% of services at St Mary’s moved to the mainland, with thousands more seriously ill patients being required to travel across the water in order to get the treatment they need.

“This sort of plan might look good on an accountant’s spreadsheet, but it’s about time the Conservatives acknowledged that we don’t live on a spreadsheet: we live on an Island in the sea, and the Solent can’t be wished away in order to cut costs.

“Islanders are entitled to the same quality and quantity of NHS services as our fellow countrymen on the mainland. This Tory plan to force sick people to spend an hour’s ferry ride in the back of an ambulance, separated from their families at their time of greatest need, is callous even by the standards of this government.

“Islanders need to open their eyes to the threat to St Mary’s future. On 3rd February, we encourage all Islanders to join in our NHS Day of Action, marching from St Mary’s to Newport town centre. We must join together and defend our hospital.”

“It’s extremely worrying that the Acute Services Redesign at St Mary’s Hospital is seriously considering moving a large number of essential departments off the Island. ENT, Paediatrics, general surgery – these are crucial services for the health of our Island community.

“To force thousands of Islanders to travel to the mainland will be a significant cost in terms of both time and money, and put pressure upon the already massively stretched hospital services that we see in Southampton and Portsmouth. Frankly, in this time of damaging austerity and unemployment levels, ordinary people do not have the resources to access mainland services. I really worry we will see residents turning down the opportunities to meet with doctors and specialists off the Island, and the health outcomes for our community will be massively diminished.

“This is not long term nor joined up thinking. It fails to look at needs – instead it is the continuation of the damage to our national health service and will force more and more people to go private, bringing in a USA style two tier system. It is completely intentional of our Conservative Government to drastically weaken our NHS until it is no more than a logo – this has been Jeremy Hunt’s plan all along.

“We urge all Islanders to be fully engaged in the public consultation on these cuts which begins next week on 2nd February. Members of every political party and the wider public must work together on a non party political platform to fight these appalling plans most effectively. It is OUR NHS – it belongs to the people, and we won’t let it go without a fight.”

Stuart: “Under stranglehold of continuing austerity”
Nick Stuart from the Isle of Wight Liberal Democrats said,

“The latest NHS hospital plan will see a very high number of serious cases transferred from the Island to non existent hospital beds on the mainland. The Liberal Democrats want to see as much retained on the Island and we believe it is possible.

“The public need full details of these plans so that the Liberal Democrats and others can offer constructive proposals working with the key bodies.The current plans are a rerun of the 2005 strategic report which was thrown out as unsafe; what has changed?

“We know the NHS is under the Conservative stranglehold of continuing austerity, but even they are starting to see the devastating consequences of underfunding.

“NHS England and the Overseeing bodies however do not recognise Islanders’ needs and need to talk to us constructively, with full disclosure. We all want good health delivered effectively and efficiently and they do not have a monopoly on expertise.”

Image: Digital Cat under CC BY 2.0

7 Comments on "Outline for future of Isle of Wight NHS services: Politicians respond"

How will this work?

So, how, exactly will the mainland hospitals be able to add another 140,000 island residents to it’s patient lists?

Not to trivialise this important discussion, but if you built a fixed link they could send ALL St.Mary’s patients to the Mainland – just get on the Newport – Southampton shuttle bus service? Not perhaps one of the intended consequences.

Perhaps if your government funded the NHS properly the option of transferring the majority of Island medical care to the mainland (which is also under acute pressure) wouldn’t need to be considered.

Colin – why do you assume I’m a Tory?
Like I said, this debate should be based on facts not fiction. Talking of which, and to address another fallacy in your post, no one is suggesting transferring the majority of medical care to the mainland.

So who is going to pay for all of these extra ferry fares to/from the mainland? We need that fixed link asap!

Vote Up7-37Vote Down
tyke
According to the CP there will be less journeys to the mainland overall as some procedures and consultations that are currently done ‘overseas’ will be held on the Island. Also no one is talking about 140,000 patients going to the mainland. This is a debate that will affect many people and which the politicians will be using for their own advantage. Last night on TV there was… Read more »
Vote Up28-16Vote Down
iowdave
It beggars belief that so many “downvote” the mention of a fixed link but offer up no comments. Never mind the possibility of patients being hospitalised on the mainland (where hospitals can’t cope anyway). The thought of having no visitors due to inaccessibility and high travel costs will surely not speed up patients’ recovery times, creating more bed blocking. Perhaps it should be made a condition of… Read more »
Vote Up2-10Vote Down