Plans for low cost housing and discount supermarket on show

Cllr Julia Baker-Smith says the majority of respondents to her recent survey expressed a wish for a low-cost supermarket, as well as a solution to parking and supported housing for the elderly. Residents are invited to view plans and give feedback today between noon and 6pm. 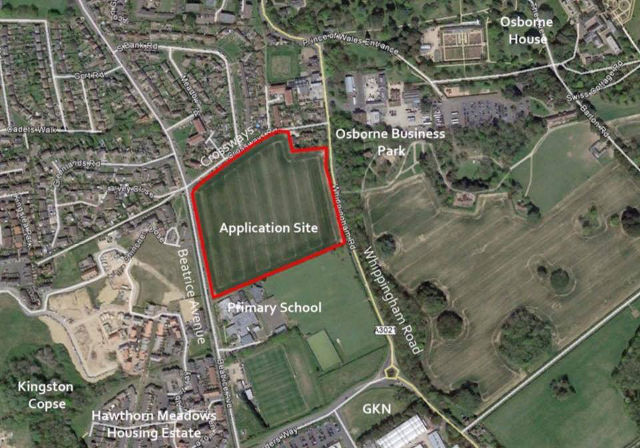 Residents in East Cowes are being invited to view plans for the development of Isle of Wight council owned land this afternoon (Thursday).

The exhibition is being held at East Cowes Town Hall between noon and 6pm today and organisations will be on hand to answer questions about the development of the site – between Crossways Road and Queensgate Primary School in East Cowes – which has been earmarked for regeneration.

A range of low cost housing to buy and rent, a discount supermarket and a park and ride will form the basis for the development.

“Crossways field is one of a number of Isle of Wight council owned sites across the Island that fall within the Council’s regeneration strategy.

“In October I delivered surveys to 2,000 residents asking what facilities were needed in the ward. The majority of respondents wanted a low cost supermarket, supported housing for the elderly and parking, both to ease pressure on the town and for school drop off and pick up. I fed the views of residents back to the architects and these have been taken into account in draft plans being shown today.

“The Osborne area of the ward is a relatively deprived area in comparison to the rest of the Island, and overwhelming opinion during community engagement has been that people struggle to access affordable food stores, and find themselves spending more than they can afford to when shopping at Waitrose.

“I have fought hard to prevent another large scale housing development on this site in recent months and to ensure that any development fulfils a local need having listened to residents. There will always be a range of views across the community and I would urge residents to attend the engagement event today to help shape our area.”

“Whippingham Road is the main artery which services East Cowes and we do not wish for these arteries to become clogged or for services to be stretched to breaking point.

“This could result in our town and businesses having an economic and service industry heart attack!”

Residents should head to East Cowes Town Hall before 6pm to see the plans.

newest oldest most voted
Luisa Hillard
As the owner of a greengrocers in East Cowes I am concerned by the effect of this development on local shops. Scenario: parent drives from town to school and parks in the supermarket car park, collects their child and then buys conveniently located groceries before driving home. This will reduce the need to visit the town centre and kill the tiny high street that East Cowes has… Read more »
Vote Up10Vote Down
electrickery

Parking will only get worse until IWC grasps the problem and comes up with sustainable answers. That will have to include considerable increase in public transport, not possible under the current arrangements. On the assumption that the FB finally gets up to speed, Cowes and East Cowes would benefit from sharing their transport and perhaps housing solutions.

Whatever the plans and any eventual planning consent might say, it will be interesting to see how much, if any, of the new housing ends up being “affordable”.

Vote Up10Vote Down
solentsailor
Any expansion along this road, regardless of need, needs to be carefully considered as the significant risk of clogging roads, reducing house prices and cramming in as many units into the smallest space will affect all residents. There is a shortage of affordable and accessible housing however this is a random land sale for development with no consideration of impact on infrastructure, location or impact on what… Read more »
Vote Up00Vote Down
wightwitch
So according to JBS this is regeneration …. Not being funny but housing doesn’t constitute regeneration and to advocate that it is imisrepresentation – regeneration is about revitalising and ensuring that a community is sustainable economically , environmentally and physically this means providing a balance of homes , (East Cowes have more than enough) facilities and infrastructure (this needs huge improvement) and quality employment ( this seriously… Read more »
Vote Up00Vote Down
Luisa Hillard

I’m inclined to agree with you. I am against the Council selling assets when they should be creating long term income streams. They can only sell this land once.

Many pros and cons which will create a variety of strong and opposing views.

Nobody should live anywhere or buy stuff.

More housing brings in more council tax for the council to use/waste.
House building was in the regeneration plan passed by the council apparently creating jobs and satisfying the need for so called social housing.
Looking at the accompanying map, there is already lots of housing there; what’s wrong with a few more? Where did everyone think more houses were going to be built?

Vote Up00Vote Down
jacks1
another doctors surgery would be nice .the present one in east cowes has significant problems with patient numbers as it is, it is inpossible to book any apointment other than an emergency appointment on the day. this is often only obtained grudgingly after self diagnosing onself. As for park and ride who will use it to the centre on east cowes which is hardly a bustling metropolis.… Read more »
Vote Up00Vote Down
Luisa Hillard

The problem is a lack of doctors, not treatment rooms.

A park and ride would need to be combined with resident parking zones in the town centre. It would serve GKN workers, mainland commuters, holiday makers who park in residential streets and then disappear for a couple of weeks.

Many residents complain that they cannot park near their homes.

Vote Up00Vote Down
Colin
@ luisa Lack of doctors is a national problem, not just E. Cowes. There is not an easy solution to this either. As for parking; unless it is free then there will be little take up. The council reluctance to have a sensible parking policy is the cause of most of the Islands parking problems. Residents parking schemes just push the problem elsewhere. There needs to be… Read more »
Vote Up00Vote Down
wightwitch