At meetings about Undercliff Drive the resounding opinion was that signage is woefully inadequate and needs to be resolved without delay. Residents say they’ve been met by a wall of silence from Isle of Wight council and in the meantime all properties have suffered damage. 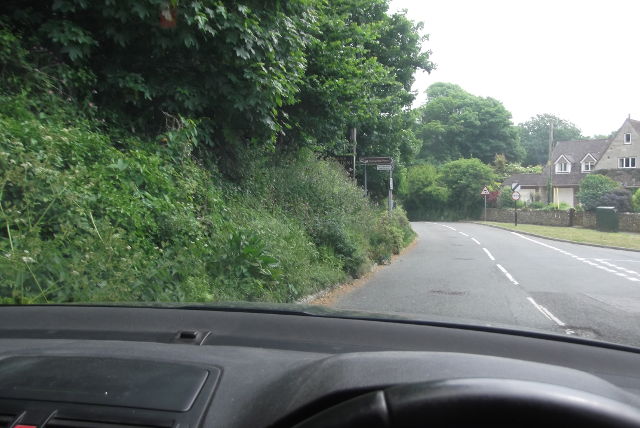 It’s five years since the closure of the Undercliff Drive (the A3055) to traffic, and the issue of basic signage has still not been resolved by the Isle of Wight council.

According to residents who returned to the previously land-locked properties – following the years it took to repair the road – there are still a large number of cars, lorries and even coaches trying to get through to Ventnor and beyond from the Niton end.

All properties damaged
One resident has told OnTheWight that every property past Woodington (the first house from West in the affected area) up to the closure, has suffered damage from vehicles attempting (and failing) to turn safely in the carriageway. Wall of silence from the council
The Isle of Wight council and Island Roads have been made aware of the problems on many occasions over the past years by Undercliff Drive resident, Tim Wright.

In August 2018, the leader of the Isle of Wight council, Cllr Dave Stewart, who is also the ward councillor for Whitwell, Niton and Chale, told Mr Wright that his letter had been “passed to officers for action”.

Hearing nothing back and seeing no improvement to the situation, Mr Wright wrote again in October asking for an update adding,

“Even though additional directional signs have been added in Niton village, not one of the new signs clearly indicates that the A3055 is cut off to vehicular traffic beyond the Western end of St Lawrence.

“Even lesser side roads on the A3055 have clearer signage and the Ventnor signage is far more effective and logical.”

Clearer signage for side roads
Mr Wright pointed the council to the signage for a side road in Blackgang, which as the photo from Google Streetview shows below is cleared signposted, as well as the signs from the Ventnor end of Undercliff Drive beneath that. Months have passed since Dave Stewart said he’d passed on the letter and Mr Wright has still not received any updates on the situation.

Minister: “Out of date directions mean misdirected traffic”
Mr Wright explained to OnTheWight that under an initiative launched back in 2012, Local Authorities were given greater powers to inform SatNav services of changes to road networks.

“Out of date directions mean misdirected traffic – a scourge of local communities. I am pleased that highway authorities, mapping companies and SatNav manufacturers have agreed to work more closely to provide drivers with accurate, up-to-date information on traffic restrictions such as narrow roads or low bridges”.

Island Roads: “Submitted a request” six+ months ago
In July 2018, OnTheWight asked the council why the road was still marked as open on Google Maps, they replied,

“Island Roads use a system called Elgin to record road works and temporary road closures and this system links to Google and roadworks.org. Roadworks.org correctly shows the road as closed to motorised traffic, but it not clear why Google Maps is now showing the road as opened, so Island Roads has now submitted a request to Google to update their maps accordingly.”

However, over six later, the road is still marked on Google Maps as open.

“It’s hard to believe that five years on since the physical closure of the A3055 to vehicular traffic that the issue of basic signage has not been resolved. At meetings held on the future of the Undercliff Drive the resounding overall opinion is that signage is woefully inadequate and the issue needs to be resolved without delay.

“Road closure signs and the yellow diversion signs, installed when the geotechnical scheme failed, were removed a long time ago leading some people to believe the A3055 must be fully open again. It is not. A small section of the A3055 is restricted to bicycles, horses and pedestrians. Motorised vehicles cannot get through.” Little warning of closure from Niton end
He went on to add,

“Currently, signage on the Ventnor side of the restricted section of road clearly indicates that St Lawrence is the end destination and all through traffic is directed to an alternative route.

“Conversely, from the Niton side, there are only local direction signs in Niton village, but very little to warn road traffic that the A3055 is no longer a through route for motorised vehicles. The single No Through road sign at the junction with St Catherine’s Road is barely visible. There are a further two No Through road signs just past Mirables on either side of the road but by then you are only a few hundred metres away from the restricted access section.

“Unfortunately with no guidance as to where the road actually ends, most drivers, having come so far already, try their luck and continue right up to the wooden fence that physically blocks their way forward.”

A wall of silence from IWC
Mr Wright finished by saying,

“The Isle of Wight Council as the Highways Authority and Island Roads have been repeatedly asked to improve signage. I’ve also asked what information the Highways Authority has provided to satellite navigation mapping companies since even updated satnav systems consider the A3055 as a valid through route for vehicles. The response is a wall of silence.

“There is a obvious need to put things right so that vehicles aren’t sent on a 7 mile detour. The overwhelming opinion of visitors and even locals, who are misdirected along the Undercliff by poor signage and misinformed satnavs, is ‘Why doesn’t the Council put up better signs?’

Yet another cock-up by our IOW Council…

The utter incompetence of both the IOWC and Island Roads is simply staggering. The fact they can’t even get a simple road sign installed years the road was closed to vehicular traffic is mind boggling. At this rate of progress the road MIGHT reopen sometime around the year 2050.

Any new signage should mention this is accessible by bicycles, and horses, presumably. It is a lovely road to ride, and should be part of the Roundtheisland route, instead of the busy Whitwell road.

Vote Up190Vote Down
laurentian
The problem there is that the “Road to nowhere” from Niton towards St. Lawrence is currently without a specific speed limit – so ‘lost’ motorists, thinking they are heading for Ventnor, are likely to round a bend at 60mph to find a gaggle of walkers or similar in the middle of the road. That particular problem COULD be solved by IWC/Island Roads – a 20mph limit might… Read more »
Vote Up100Vote Down
buckle

The website ‘roadworks.org’ , as of 3 Jan 19, appears to show the A3055 along Undercliff Drive as being fully open without any restrictions?

Vote Up150Vote Down
paulb
I’m a regular visitor to the Island having family in Niton Undercliff, and although I’m fully aware of the closure I also agree that the signage in Niton is atrocious. When on the island I drive daily through Niton Village to the undercliff and down ST Catherine’s Road and it still amazes me how many people continue on down Undercliff drive towards Ventnor. This number increases during… Read more »
Vote Up3-2Vote Down
bones
One of the problems is that if you phone the council you are told the problem of signing belongs to Island Roads while IR directs us back to the Council. Before the last Council elections we were promised a 20mile limit in Seven Sisters Road by Mr Stewart himself. Since he won his place we haven’t heard a word from him despite several e mails. The Island… Read more »
Vote Up10Vote Down