Residents are concerned at significant landslip at Undercliff Drive. 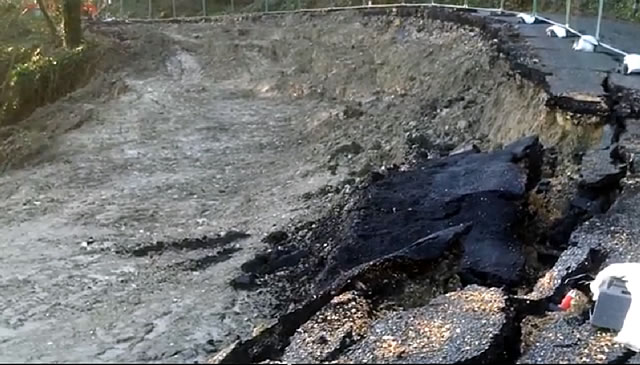 Overnight, between Friday evening and Saturday morning, a significant landslip occurred at the St Lawrence end of Undercliff Drive leading to sections of the land dropping 5-6 feet.

Locals told OnTheWight they thought parts of the disturbed topsoil had moved as much as 20m over the weekend.

Fears of 2001
Residents tell OnTheWight they fear the cracks that are appearing on the tarmac have very similar characteristics to those that appeared in 2001, before the major landslip in the area.

As all Island residents will be aware, the rain falling on the Isle of Wight has been significantly above normal levels.

Location
For those that know the area, the slip is at the section that was previously restricted to one-way, controlled by traffic lights.

Other major engineering works are being carried out along the road nearer to Ventnor, so residents were having to use the now-collapsed route to Niton to get between their homes and the outside world. Since Saturday morning, they have been told to exit via the other direction, toward Ventnor, as the Niton route has become impassable by car.

Local residents told OnTheWight the tarmac that used to cover that side of the road, on the slipped section of road, was removed some time back by the contractors.

Comparison photos
These photos show the site as it was back in the middle of January compared to how the similar views were this past Saturday and Sunday.

Click on them to see the photos full screen. 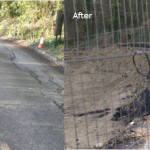 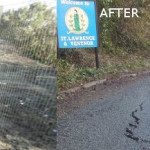 Video
Here’s a video that was shot on the Sunday. Please be aware that it was very windy at the time, so sections of the video are very noisy.

Photo gallery
A selection of the photos that were take at the site over this past weekend.

Click on them to see the photos full screen. 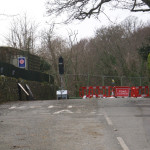 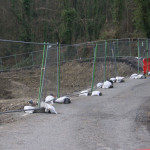 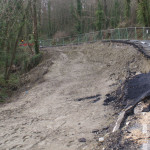 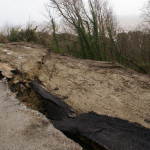 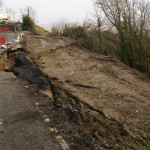 They replied to those questions with the following:-

“The geotechnical works at the Undercliff which are taking place in four sections of the highway have been progressing well and in accordance with our planned programme of work. However, at one of these sections, close to the caravan park, the recent storms and flooding has resulted in significant ground movement which has caused further damage to the highway.

“We have been undertaking daily visits to inspect the site to try and keep the road open, however following further ground movement over the weekend, the road condition means it is now impassable for vehicle traffic.

“We have therefore taken the decision to close the road to all but pedestrian traffic and will be closely monitoring it over the next few days before making a decision about the continuation of works in this area.

“We are keeping local residents and businesses in the affected area informed and will be updating them on any decisions we make. Work on the remaining sections of the Undercliff is unaffected and is continuing as normal.”

newest oldest most voted
geluk
As a tourist here currently have found this closure a pain, as not seen on my car’s satnav; Google maps still shows Undercliff Drive as open too. Wanting to return to our rental near Buddle Inn was very frustrating (from Bonchurch) as we then ignored satnav as it always sent us to section of Undercliff that’s only open to walkers. Following Council’s signs for Niton just kept… Read more »
Vote Up6-1Vote Down
Robert Jones
PS – I do know the easiest thing in the world is to criticize other people; and of course I’m not a geo-technician either; but people who know this area were saying months ago that the slow pace of work on this stretch, and the exposure of very permeable soil, would inevitably lead to a slip at some point; and it’s hard to say they’ve not been… Read more »
Vote Up20Vote Down
Tim

There’s a stream under that section of road

Vote Up10Vote Down
Tosh
Tim you are correct about a stream under this part off the road.About 25 years a go a well was put in to collect the water from the stream and then pumped under the road to then run down the other side of the undercliff.The then south wight council were responsible for the maintenance of the pump.This work was carried out by my old company J H… Read more »
Vote Up20Vote Down
Robert Jones
Interesting: and it does make you wonder how much local expertise just gets lost when one contractor moves on for whatever reason, and another takes their place. The drainage scheme, and coastal protection, this side (Niton) of the slip haven’t been totally successful at restraining land movement, by the way: where I am, overlooking Reeth Bay and Castle Haven, there has certainly been a sinkage of several… Read more »
Vote Up10Vote Down
Green Mary

This is such a shame. Perhaps it’s time to think about having that section of the road permanently closed.

Although I do feel for the residents there, they would be able to still access their properties from either side of the closure.

Much of that was surely cut out by contractors, and left unprotected while the rains hit the slope and caused it to slip – looks to me as if this was always going to happen.

I must admit, the time is fast approaching when the whole road needs to be closed and an alternative option explored. It’s not as if we cant get to Niton using other ways, and apart from the fabulous views, the Undercliffe is basically a tourist route and property access. My sympathies to all those affected.

Vote Up10Vote Down
Lee Morris
In 2000 when the slip occurred we were managing the Caravan Park and had to deal with the loss of land and all the ensuing problems. The explanation for the cause of the slippage was that due to water being absorbed by the cliffs behind, the volume of water trying to drain down the slope to the sea met the impervious blue slipper clay and acted as… Read more »
Vote Up10Vote Down
Robert Jones

That would have been a wise move at the time; however, simply removing the tarmac and leaving the road exposed would still have caused a problem. High Point Rendle were geo-technical experts. Can the same be said for those responsible for repairing the road now: and will it ever be possible to repair it at this point, without taking a loop further inland?

Castlehaven and Niton will soon be claimed by the sea. What a nightmare!
It may be gods will…