Former UKIP candidate says the “Brexit Voice” has been “lacking” from Isle of Wight MP Bob Seely, and so he’ll be supporting The Brexit Party 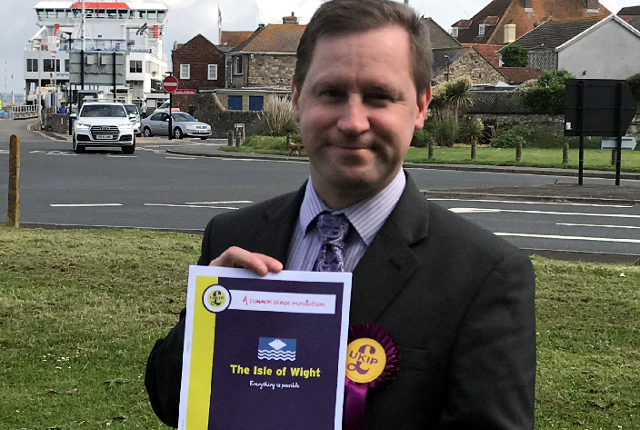 Daryll Pitcher, the UKIP prospective parliamentary candidate for the Isle of Wight in 2017 elections has announced he will not be standing in this election.

Daryll explained that he’d left the party a couple of months ago and felt it right to “sit this one out while I weigh my future options”.

He goes on to say that he’ll support Peter Wiltshire of the Brexit Party to “form a Brexit coalition on the Island”.

“Forming this coalition makes perfect sense. The Island voted 62% Leave in the referendum and we deserve a strong Brexit voice here.

“This is sadly lacking from Bob Seely (former Isle of Wight Conservative MP) who has voted at every opportunity for both Theresa May’s terrible surrender Deal and latterly for Boris Johnson’s still deeply flawed version.

“Bob also voted to extend Article 50 and then tried to pretend that he hadn’t. When I pressed him on this he became agitated and accused me of wasting his time. All I wanted was the truth, which Hansard provided.”

Pitcher: Don’t remember Bob lifting a finger for Vote Leave
He goes on to say,

“During the referendum campaign I was one of two coordinators for Vote Leave on the Island and I don’t remember Bob lifting a finger to help here.

“Many caring people put in many hours of graft for that 62%, but in my view, Bob wasn’t one of them. I question his commitment to Brexit and to the Island.”

If he wants Brexit to appen, BxP need to stand aside as well

Nobody cares what you do