Residents say the proposed Le Veness development on the seafront is too dominant and not at all in keeping with the Conservation Area. Have your say before the deadline 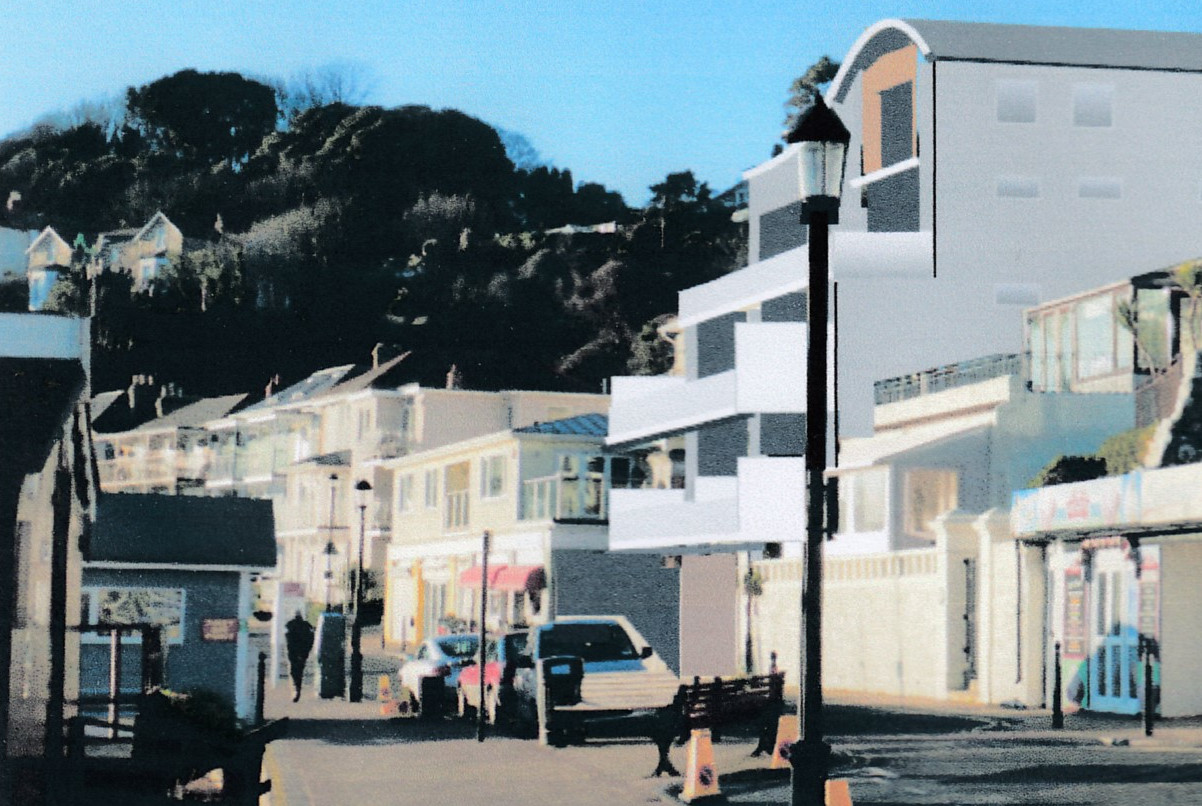 Back at the end of last month, OnTheWight revealed the latest plans for the Le Veness site on Ventnor’s seafront.

The application was open to comments from the public and to date has attracted eleven letters of objection, with just one supporter, the Ventnor Town Council (VTC).

Much of Ventnor is now a Conservation Area, which was not in place when many years ago permission was given for a six-storey building on the same plot.

Impact on the street scene
The majority of the objections raised by residents point towards the height and density of the building, with one neighbour calling the plans an “unacceptable eyesore”.

This computer generated image below (click to see larger version), has been put together by a qualified engineer (who has a love for the Victorian seafront) based on the information provided in the application.

It shows how the street scene would look from the east if the development is approved and constructed.

Range of objections
Too dominant, overbearing, not in keeping with the Conservation Area, risk of landslide and ground stability issues, blocking out sunlight for nearby properties and a loss of the ‘established aesthetic’ of the ‘open sweeping vista of small chalets and Victorian buildings cascading down to the shore line’, are all genuine concerns raised by residents.

One resident likened the design of the proposed roof of the building to “Donald Trump’s hairstyle or an Audi garage”.

Neutral views
Jack Whitewood from Ventnor Exchange made it clear his views on the plans were neutral, but asked planners to,

“Make note that long established events like the Fringe host events on Ventnor Esplanade and new residential developments should note this area is mixed use with a wide variety of business’ amongst residential properties.”

VTC decision
One resident expressed to OnTheWight their bafflement at the Ventnor Town Council’s (VTC) swift approval for the scheme.

Although the application was not being advertised to the public until Friday 29th November, it was considered by the VTC planning committee the night before, just hours after a site notice was erected.

A spokesperson for the VTC told OnTheWight,

“Our Committee’s process is that the Isle of Wight Council’s website is checked for new applications each Friday and meetings arranged to ensure that all are considered by the Committee before the expiry date.

“In this instance, it would have been possible to consider the Le Veness application later than the 28 November but we had no reason to believe that to be necessary as we were not aware until the day before the meeting of the date of the Isle of Wight Council’s notice going up.”

‘Late’ site notice
In response to queries from other residents about the ‘late’ arrival of the site notice, a spokesperson from Isle of Wight council explained that site notices are placed at or near to the site of an application by the Friday that it is advertised.

In this case the application was being advertised on 29th November, with a 21 day consultation period for residents to share their comments.

Have your say
There is still time to add your comments on the application by visiting the Isle of Wight council’s Planning Website.

Search under reference number 19/01377/FUL to add you comment before 20th December.

12 Comments on "Proposed 5-storey building on seafront an ‘unacceptable eyesore’ say residents: Still time to have your say (updated)"

newest oldest most voted
Benny C
Height isn’t an issue if the building is well designed and attractive. This one is neither, it’s cheap, clunky , singularly quick profit led, which will simply reinforce the image problem which holds the Ventnor economy back. The owner of this site and the IOW planners advising the pre-application process should be ashamed. This is short term opportunist money making, not long term thoughtful place making. Want… Read more »
Vote Up24-4Vote Down
davimel
We can ‘have our say’ ’til the cows come home but it will not change the outcome as usual. We are treated like idiots in Ventnor with the freebies to all and sundry off our council tax… (Botanical, Haven, Winter gardens et al.) so why on earth would we think that any input, except for a legal challenge, will affect the outcome of a planning case? Nope!… Read more »
Vote Up14-4Vote Down
richard

As I said on the original post about this proposal,if anything gets approved, it will be years before anything happens, if at all. The Gaiety and Broadlands have had multiple planning permissions for years, and look at those!

It looks unpleasantly similar to similar constructions in Sandown & Shanklin – Napoleons Landing & whatever that massive concrete box I can see across the bay towards Luccombe. Even these would have been OK had they been of lower heights. There are enough brownfield sites crying out for affordable housing along all these seafronts.

Vote Up8-2Vote Down
ian123
Whether we like them or not, the previous planning permission for the site, together with the other developments already along the Esplanade, provide the precedents that anyone involved with deciding this planning application would need to consider. The two critical questions are therefore: a) is the new proposal better than the one previously granted for this site? b) is the new proposal better than what is there… Read more »
Vote Up7-12Vote Down
Benny C
Sorry but as someone involved for decades in designing and delivering both good and, regrettably, bad buildings, I must challenge that. Of course it’s better than what’s there (an example of previous poor planning, which has totally failed, with awful results) but using previous applications as a benchmark is a risky approach, prompting concerns that ‘here we go again’. . We will have a long time to… Read more »
Vote Up25-5Vote Down
ian123

If you are as involved as you say, you ought to know that a previous planning decision on a site is a material consideration, which planning decisionmakers are required to consider. No amount of opinion can wish that away.

Vote Up5-1Vote Down
Benny C
Fair challenge. Depends on how smart the application is. A really good architect would blow that Previous pile of equal nonsense out of the water. A strong design will have a strong planning case, because it will be thought through properly and tick boxes plus more. Reference to previous schemes is contextual and a good planner will bat rubbish away. Sadly I’m not sure we are awash… Read more »
Vote Up7-1Vote Down
joelincs

5 story’s is not high by today’s standards and only slightly higher than existing. there are already varying height buildings. i would much rather go up than take more farmers fields.

It actually seems to fit in quite well from that illustration, and look suitably quirky for Ventnor…

It looks like a primped up agricultural building. Cheap, bland, clunky and simply a means to a fast buck. This is a jewel like seafront community, not a dairy farm.