A total of 35 staff are facing redundancy across the three campuses. 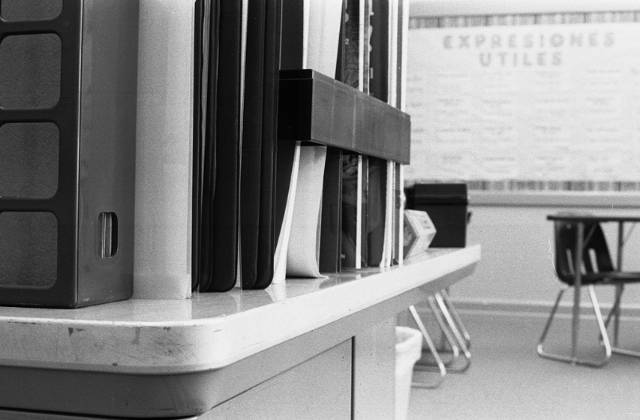 OnTheWight was contacted by a pupil at the VI Form last night, who explained that details of staff redundancies at the Island Innovation Trust (IIT) run campuses was outlined in a meeting held at Carisbrooke High School.

“This caused an uproar amongst my fellow students.”

As reported at the beginning of January, voluntary redundancy was offered to staff across the three campuses.

Compulsory redundancies
The Governing Body of Carisbrooke College and Medina College has this afternoon confirmed they have “entered into a period of consultation with regard to a number of proposed compulsory redundancies at both colleges, including the VI Form Campus in Newport”.

“Our overriding aim is to create a sound financial platform for continuing improvement in the quality of teaching and learning across both Colleges and the VI Form and build on the good progress that we have made so far.

“Whilst our recent voluntary redundancy scheme has had a significant impact, further identified savings over the next two financial years still need to be achieved. As such, we will continue to work closely with staff and their professional associations throughout a period of informed collective consultation so that we can consider ways to minimise the number of redundancies needed.

“Our compulsory redundancy proposals affect staff in the areas of support, premises and cleaning (33 Posts), with minimal impact on teaching staff (2 Posts). We are working hard to ensure that staff are helped and supported through this difficult time and are continually looking at ways to reduce the overall impact on posts before the end of the consultation period.”

Jake has set up an online petition urging pupils and their parents to show their opposition to the planned redundancies. At time of publishing it had attracted 185 signatures.

Does outsourcing support jobs (such as cleaning and premises management)to private companies make financial sense? Or are they going to ignore these tasks in the future?

I don’t understand the above comment? Where in the press release does it say it’s being “outsourced”?? I think it’s unhelpful to speculate in circumstances such as these where people’s jobs are at risk!

Think people need to step back and think before posting on subjects like this.

Vote Up00Vote Down
Cynic
@DR Clarification- it does not take a stretch of the imagination. 1. Large building complexes require constant maintenance, cleaning and support. 2. Those tasks require staff to perform them. 3. If those staff are made redundant there are two options: abandon the tasks or get somebody else to do them. 4. The first option is untenable if the college is to continue operating thus somebody else would… Read more »
Vote Up00Vote Down
Dave Richardson
Sorry but I still dont see where the college press release has said that ALL of the premises cleaning and caretaking staff are being made redundant? Think you should wait until an end of the process before “jumping to conclusions” which is very unhelpful for all involved! I see nowhere in this that they have said “all premises staff” are being made redundant?? Unless you can correct… Read more »
Vote Up00Vote Down
Cynic

Well… the press release wouldn’t would it? It does not stop speculation though- watch this space!

Are not the Quarr Group a partner in The Island Innovation Trust?

[The Quarr Group provides Building and Facilities Maintenance, Cleaning and Catering Services through its subsidiaries Mountjoy, N-Viro and Pabulum across the south of England.]

According to the CP website AET are planning to outsource “school business managers, caretakers and cleaners, finance and admin staff, librarians, ICT staff, welfare officers and staff running sports and leisure facilities in AET’s 80 schools across the country.”

…. and is thinking about forming “a joint venture company with another organisation to provide services more efficiently. The contract is estimated to be worth between £200m and £400m.”

Errr … or you could read OnTheWight’s article about AET outsourcing services – published many hours before the CP one ;-)

Ooops! Missed that one Sal- I should have known better! :-))

Vote Up00Vote Down
greenfiremouse
As so often in these cases, the important role of support staff is totally ignored by the decision-makers. The “minimal impact” of the compulsory redundancies on teaching staff will still have an enormous impact on education while the savings are relatively small. It often turns out that it would be more efficient to lose one or two members on the senior management level who can often earn… Read more »
Vote Up00Vote Down
Nitonia
Completely agree, we also have a free school that can also potentially cream off 100 or so of the brightest kids. The new free schools attract a massive amount of funding that is diverted away from existing schools whose budgets are continually cut in real terms. Pupils numbers are falling generally anyway so a new free school taking pupils away from existing schools is the reason behind… Read more »
Vote Up00Vote Down
Cynic
Future historians of economy might well regard the current “Academy system” as the harbinger a new business model devised by capitalist governments. Such research might suggest: 1. The capitalist government observed failing industries and decided that privatisation would improve it- take education as an example- and encouraged private organisation to bid, who did so for profit opportunities (then and in the future) or for ideological/religious reasons. 2.… Read more »
Vote Up00Vote Down