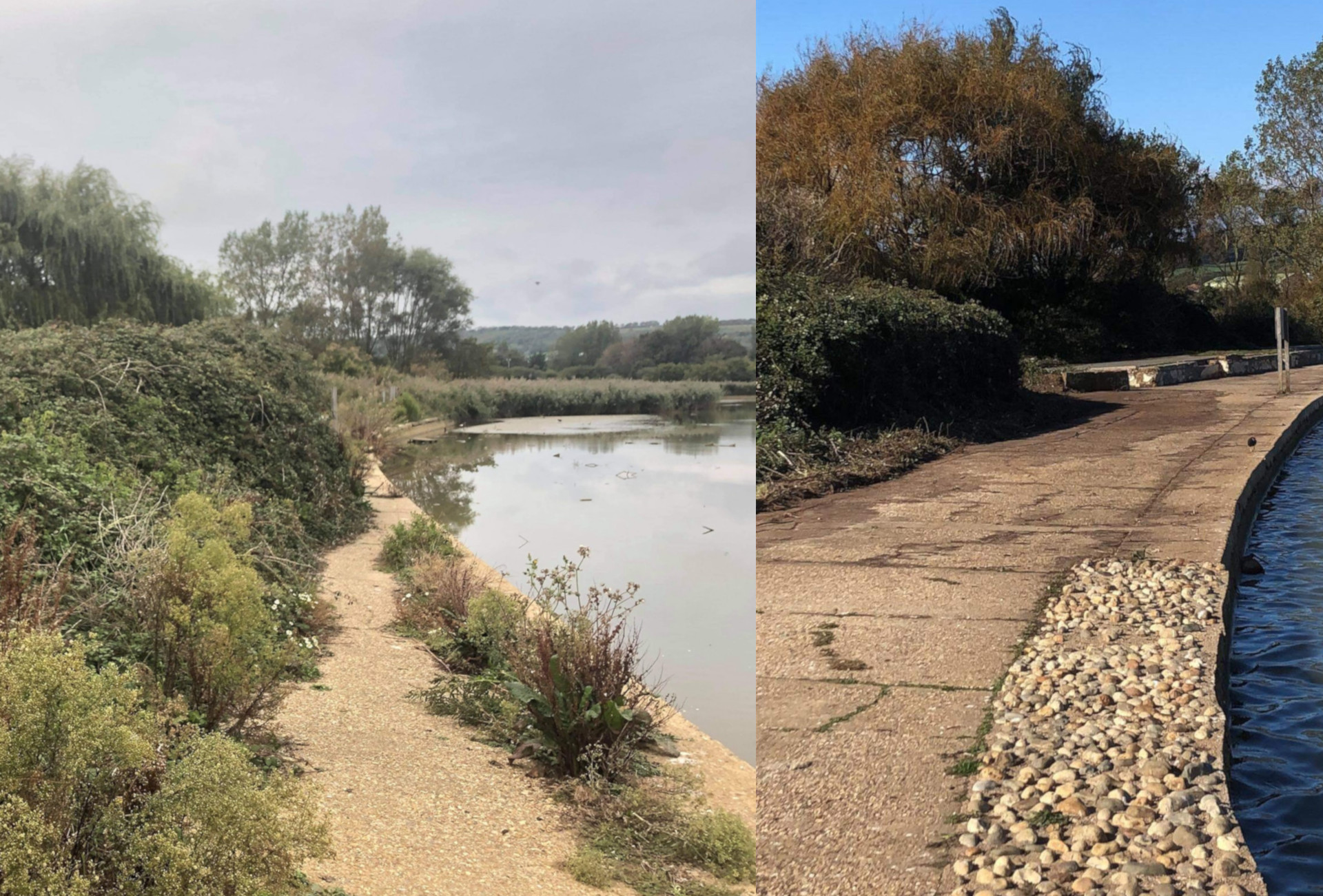 Community-minded residents and councillors in Sandown took part in a two-day clear up around the canoe lake at the weekend.

The efforts come on the back of a campaign that took place in August when carp were rescued from the lake after the low water level was spotted, meaning some fish were left gasping for breath.

Two busy days
On Saturday and Sunday last weekend, Emma Jupe (Admin of the Sandown Canoe Lake – Save Our Fish Facebook Page) was joined by Alan Jones, Adrian Whittaker (Lake councillor), along with Jeanne Jones, Ian Fletcher, and Councillors Ian Ward and Paul Brading. They cleared brambles and other foliage and three vans worth of brambles were transported to the tip by Stephen J Parkes, who was also present each day.

Jupes: Proud to be a part of this project
Emma told News OnTheWight,

“I am very proud to be a part of this project. I have worked throughout this alongside the council and professionals regarding the lake maintenance and conservation.

“We have followed all the safety guidelines to make sure that wildlife are not disturbed and I can confirm that this event was very well organised.”

Thanks were express to Dan Martin who took along his power tools and also contributed to the bramble clearance.

newest oldest most voted
Benny C
Great result, what a difference. Ian Ward nowhere to be seen. Not even a thank you. What a surprise. Quite likely very busy dreaming up more ways to unravel the mess he has made of the chain ferry procurement. Or maybe reading the Island Roads contract again and again until he actually understands what a tangle he signed us up to there. Or perhaps he’s just sitting… Read more »
Vote Up26-7Vote Down
alisonjane
Sandown Town Councillors were no where to be seen when the fish in the canoe lake were dying! Apart from one, using it as a photo opportunity and then informing people (via Facebook) that there were no dead fish and she never saw any in distress. Oh…..and then another shouting at local residents like the arrogant man he is! It took over a week of just one… Read more »
Vote Up190Vote Down
sandowner
Unfortunatelt Benny C you are wrong and the report is a little incomplete in not mentioning that Jeanne Jones , Ian Fletcher, Stephen Parkes and Councillors Ian Ward and Paul Brading were present most of the day. Everyone worked in bubbles to comply with Covid rules as much as possible. I do not understand the constant belittling of people who work hard for the community and usually… Read more »
Vote Up4-8Vote Down
chausettes
Sandowner, while Benny C may have been incorrect, I can think of plenty of reasons to berate and belittle our current crop of councillors. The vast majority of them are very poorly equipped to hold the positions they have. It’ll take a lot more than a bit of community clean-up to redeem them in my eyes. Whatever way you look at it, our elected Council members ARE… Read more »
Vote Up13-1Vote Down
Benny C

Apologies for the error, you are right to call this out. Ian Ward has done much for the island community. Chain ferry fiasco, Island Roads mess, etc. With contributions like that he should be kept clear of any projects.

Emma didn’t provide the names of the other volunteers – had she done so, then of course we would have included them. I will update the article now with their names because, of course, they deserve the recognition for their efforts too.