We all see the Ryde Arena – It’s so massive it’s hard to miss – but what’s it like inside now? Watch this video shot by the adventurers who have been inside. OnTheWight also chats to them asking, “Can it be saved?” 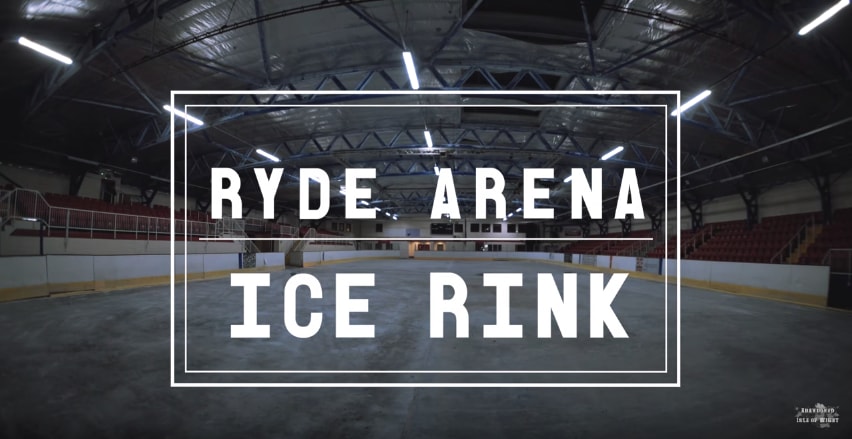 The closure of Ryde Arena has brought a lot of sadness to the Isle of Wight and huge amounts of effort have been expended to try and get it open again.

To date, sadly, none of these efforts have borne fruit. (You can read the history of the plight of Ryde Arena / Planet Ice here)

What’s it like inside now?
Given its huge size, it’s pretty hard to miss, so we suspect that a lot of people have been wondering what the inside of the building is like, especially after the current owners authorised the removal of large amounts of equipment from it back in April last year.

Happily, some plucky adventurers got in touch with OnTheWight to let us know that they’d been inside and had shot a video of the current state of the building.

OnTheWight chatted to the people who entered to shoot the video. There’s some worrying news, but also some hope. Details after the video.

The adventurers
OnTheWight wanted to know more beyond the video – How is it inside?

“In my view, it’s obviously being neglected.”

“There’s the sound of water constantly running inside.”

“On the left-hand side, the floor is starting to collapse. It’s really spongy underfoot.”

Q: Could it still be used as an ice rink?
Watching the video, the light grey of the concrete under the area that used to be ice almost looks like it could be the ice rink. OnTheWight asked if they thought it could be brought back into use as an Ice rink, but the news was worrying

“There’s a very evident crack in the concrete across the ice rink.”

Something positive
When we asked about the impact of the video, they told us:

“I’d love for something positive to come out of this.”

There is hope though, if action is taken now.

newest oldest most voted
juliancritchley
What’s happened to Ryde Arena is a textbook example of how absentee property speculators have asset-stripped communities. But they have been aided by a long policy of public bodies like the council, refusing to take responsibility for those community assets, preferring to sell them off at all costs. When we allow our public property to be sold off to private interests with no interest in the local… Read more »
Vote Up13-5Vote Down
electrickery

Indeed, JC. So what is your party (aka Official Opposition) doing about it???

Vote Up4-3Vote Down
juliancritchley
Clearly the next Labour government (hopefully sooner rather than later) have already committed to restoring local government finances. However, their real challenge to the current situation is their championing of public ownership and public services. Ultimately, it’s the same neoliberal/Thatcherite philosophy behind Carillion, privatised utilities, and the sell-off of the Ice-Rink. Until then, in areas where there are Labour councils, some are already taking steps to return… Read more »
Vote Up8-6Vote Down
iowdave
It’s all very well harping on about what Labour would do but where is the money coming from. They are already going to pump billions into the NHS (yes, I know it’s needed) and scrapping university fees etc. etc. I see a huge rise in taxes looming if, God forbid, they return to power with their current policies. The Arena would be an ideal venue for a… Read more »
Vote Up6-4Vote Down
juliancritchley
The Theatre is a different issue. We already have a Theatre in Ryde, but it, too, was sold off cheaply by the IoW council to a private owner, who has also let it deteriorate to the point where it is now almost derelict. There’s a pattern here. An incoming Labour Government will, without question, raise taxes on big business, some of which pay no tax at all… Read more »
Vote Up10-3Vote Down
iowdave

A very good propaganda speech, but historically it has been Labour who were the party of increased taxation (for the working class as well) and the Conservatives who have then reduced tax.

I seem to remember that IWC were looking for some commercial property to invest in?