Council officers and the Cabinet member responsible were questioned by the Scrutiny Committee last week over the proposed £3m+ council investment in BT’s Rural Broadband project. 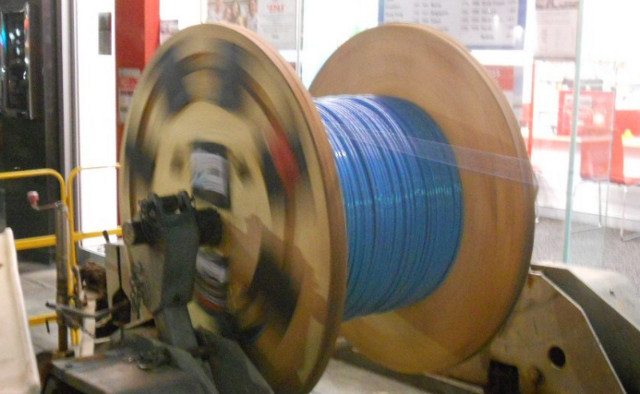 Ahead of tonight’s Cabinet meeting, where will be asked to approve a £3m investment for BT to roll-out the rural broadband project to 20,000 rural homes on the Island, members of the Overview and Scrutiny Committee had an opportunity to question the Cabinet member responsible for the Rural Broadband project, Cllr Shirley Smart, as well as senior council officers last week.

The meeting kicked off with a written question from John Irvine, the boss of Isle of Wight broadband provider, WightFibre.

A written response prepared by officers was read out by Chairman of the Committee, Cllr Geoff Lumley. It stated that WightFibre had not provided a credible business plan, supporting documentation or detailed deployment plan to support its assertions that it could deliver as promised. It went on to say that had WightFibre been able to deliver the plans, the council and government would not have been able to allocate the public funding.

The written reply went on to say that the government funding must be spent by the end of September 2015.

Risk of Judicial Review?
Vice chair of the Committee, Cllr Dave Stewart asked whether advice has been taken on the risk of judicial review.

Director of Economy and Environment, Stuart Love, replied that the council had been advised throughout the process both by the BDUK Government representative and well as taking external legal advice.

The advice given was that should anyone wish to take a Judicial Review against the council over the issue, it could be successfully challenged by the council.

Cllr Stewart went on to ask what the impact to businesses and residents on the Island would be if the project did not go ahead. Cllr Smart linked the Rural Broadband project to “getting much more economy on the Island”.

Cllr Smart advised that the council are working in conjunction with the Chamber of Commerce, who have a small group working on the basis that the project will go ahead with BT.

89 new cabinets
In reply to a question from Cllr Fuller about coverage, Stuart Love replied that BT would be installing 89 new cabinets to reach outlying areas.

Don’t be ‘swayed’ by ‘special pleading’
Cllr Hutchinson said he recognised the issues raised by the Managing Director of WightFibre as ‘special pleading’ because his company relies on selling fast broadband to a limited area of the Island.

He went on to say that residents in the West Wight dream of getting 2mb of broadband. He recalled complaints from tourists in the area about not being able to connect to the Internet at all.

The councillor for West Wight finished by saying he hoped the Cabinet would not be swayed by the ‘special pleading’ of WightFibre and other similar providers.

He said he believed it is ‘only BT’ who has the resource to roll out the project adding,

“This is so important for tens of thousands of people.”

Following the Newsnight report last week that many schemes have been extended to 2017, the council confirmed to OnTheWight that the Island scheme was subject to 2015 deadline.

“If the project isn’t finished by then the money won’t be there. Our plans are to make sure we have the rollout completed.”

Will laying fibre affect Highways PFI schedule?
In reply to a further question from Cllr Whittle about whether digging up the roads to lay fibre would affect the Highways PFI timetable, Mr Love replied that BT will have to fall in line with Island Roads rather than the other way round.

He added that where there is already ducting in the roads and pavements, they will not need to be dug up again, as the fibre can be pulled out and replaced easily.

Have local companies been disadvantaged?
Chairman of the Committee, Cllr Lumley, raised the issue of the two Island companies (Highpoint and WightFibre) who he said wanted an opportunity “to get in onto this major, major project”.

He asked Cllr Smart to comment on what he saw as a possible disadvantaging of Island companies with regard to the project.

Cllr Smart reminded the committee that the project had been inherited by the new council, adding that she personally would’ve liked to have council agreement that even if the local companies weren’t able to do the whole project, they could’ve worked in consultation with another tenderer.

She added that she’d been led to believe that because of the size of the two Island companies, they were not in a position to do the complete roll-out.

“Myths get reinforced”
Cllr Stewart referred to some ‘confidentiality causes’ in the document and went on to ask whether the community would be kept informed on the benefits of the Rural Broadband project.

He added that he thought there was an opportunity to market what should be a positive outcome, but

“The community needs to have that regularly enforced, otherwise perhaps a number of the myths that exist get reinforced.”

“As much information will as transparently as possible be put out there.”

She went on to say that the final points of the contract have yet to still be agreed.

Mr Love added that part of the project also demands stimulation and requires the council go out to residents and businesses to promote the services available.

Conclusion
Cllr Lumley said the impression he’d received from members of the committee was that the BT project was the only way forward for broadband on the Isle of Wight.

Members of the Committee agreed they were comfortable with the proposal Cllr Smart would put the to Cabinet tonight.

The Cabinet meeting takes place from 6.30pm at County Hall. Members of the public are welcome to attend and ask questions of Cabinet members prior to the meeting.

newest oldest most voted
Cynic
“Mr Love… added that where there is already ducting in the roads and pavements, they will not need to be dug up again, as the fibre can be pulled out and replaced easily.” Really! :-)) Experience elsewhere shows that where copper has been in place for decades, it sticks to the ducting and is thus difficult to extract. How long as the Island copper comms been in… Read more »
Vote Up00Vote Down
Dalek
Well, no there is no change to the limitations imposed by taking broadband over copper. What will change is the distance from the source of faster broadband to the customer. Currently, for most people the really fast service is at their local exchange and the further away from that you are, the slower the speed due to the length of copper wire involved. Having a cabinet fed… Read more »
Vote Up00Vote Down
Cynic
Correct- distance from cabinet increases attenuation (i.e. weakens) the signal. 89 new cabinets are promised? Just enough for the 89 “Hamlets and Other places” listed in the Isle of Wight. What about the 9 towns and 44 villages? If the new cabinets are placed in the rural geographic area to service the Hamlets etc, it is unlikely that copper distance will be shortened for most people and… Read more »
Vote Up00Vote Down
mat

It is obsolete even before it gets started. O2 and other mobile operators are offering cheaper contracts with phone and internet operating through the airwaves.It will be faster and cheaper than existing landlines and more efficient.

Cancel it altogether Shirley.Spend the money somewhere else and create some jobs.

£3 million is small change to BT when you compare it to the £1.2 billion BT are to be paid from public funds to “rollout” faster broadband around the UK. The bidding process, for the contract, seems to be somewhat unfairly slanted in BT’s favour. A recent BBC news article gives a good overview of this project…
http://www.bbc.co.uk/news/technology-23173157

For what to expect from BT see here: