Good news for local group that helps those with demetia and other age related conditions as grant money boosts what they can offer.

Thanks to Krissy for sharing this great news with VB readers. In her own words. Ed 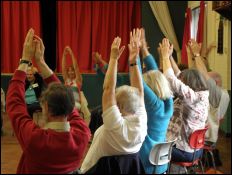 Therapeutic singing sessions for Islanders suffering from dementia and other age related conditions are set to be extended following a cash boost from the Isle of Wight Community Fund (IWCF).

Set up by Independent Arts, the SingAbout sessions already run in Freshwater and Newport. The grant of £2,800 from the Herbert and Peter Blagrave Charitable Trust grant programme which is managed by the IWCF, will enable the charity to now start a weekly session in Ryde.

SingAbout is based on a proven form of therapy specifically developed for Alzheimer’s and other dementia sufferers and is recognised by the NHS.

Waiting list for many clubs
“Both our clubs in Freshwater and Newport are well attended and we have a waiting list for other areas on the Island” explained Kate Ball from Independent Arts. “With the help of funding from IWCF we will be able to establish another group and offer therapy in a fun way. It’s open not only to those suffering from dementia but all older people who wish to improve their memory, breathing, movement, speech and confidence.”

The Blagrave Fund looks to support charities that demonstrate an enthusiasm and determination to meet immediate and emerging needs, and which have captured the imagination and commitment of the local community.

Other charities benefit from funding
Two other Island groups have also recently received funding from the IWCF through the Wightlink Grassroots Fund.

The Street Pastors will use their funding to cover the costs of buying flip-flops and bottles of water. They will be distributed by volunteers who come to the aid of vulnerable people on Friday nights in Ryde, Newport and Ventnor.

Money awarded to the IW Samaritans will contribute to the continued training of their volunteers, much of which takes place on the mainland.

More about the IWCF
The Isle of Wight Community Fund manages a number of grant programmes aimed at helping community and voluntary groups across the Island.

The IWCF will also be attending the Rural Community Council Funding Fair on 9th November at the Riverside Centre if you would like to find out more or discuss a potential application.