The Guardian Loves The Isle of Wight

On Saturday the Guardian had a blitz of article on the UK as a destination for beach holidays – and the Isle of Wight came out in most of the pieces!
By our quick straw poll, it appears that The Island was mentioned more than any … 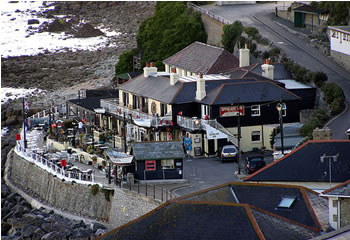 On Saturday the Guardian had a blitz of article on the UK as a destination for beach holidays – and the Isle of Wight came out in most of the pieces!

By our quick straw poll, it appears that The Island was mentioned more than any other part of the country. Well done to Sue Emmerson and Kellie White in the press office at the Isle of Wight Tourism Press & PR Department for getting so many items in there.

Biggest tip ‘o’ the hat goes to The Spyglass, Ventnor who got the main photo in the article covering the Seaside Pubs.

(We didn’t get the paper at the weekend, so if there’s anyone out there who can take a picture of the Spyglass spread and mail it to us, we’ll include it in this piece.)

You ready for the wide range?

Spyglass Inn, Ventnor Esplanade, Isle of Wight
The Spyglass dates back to the mid-19th century and sits at the western end of Ventnor esplanade overlooking the English Channel. The fisherman’s pie is huge, as is the seafood casserole; if you want something smaller there’s Ventnor lobsters and crab. Live music.

The Needles, Isle of Wight
The jagged white chalk stacks of the Needles are best viewed from the chairlift of the Needles Park, which takes visitors from the top of the cliffs to the beach at Alum Bay. The white teeth of the Needles stretching out to the red and white striped lighthouse provide a stunning contrast to the multicoloured cliffs of Alum Bay.

Cowes to Sandown, coast-to-coast across the Isle of Wight
11 miles, NCN route 23
There are two long sections of railway path. The first starts south of Cowes, runs parallel with the river Medina and finishes on the outskirts of Newport. After threading your way through town, the second railway path is joined at Shide and takes you through pasture and woodland to the outskirts of Sandown. If you’re riding a mountain bike, there are plenty of fine chalk byways and bridleways on the west of the island. The Tennyson Trail has views out across the Channel.

Alum Bay, Isle of Wight
The cliffs above Alum Bay are made up of a sequence of sandstones and clays which don’t immediately suggest anything too geologically exciting. However, if you see them in low sunlight, especially after rain, the varied mineral contents of the different strata produce an amazing succession of “stripes” which vary in colour from powdery blue to deep purple, chromium yellow to matt grey. In all, there are thought to be 21 different hues.

Norton Grange Coastal Chalet Resort, Yarmouth, Isle of Wight
The Isle of Wight is a great place to get away from it all, and this adults-only Warner Break resort with tropical palm-filled grounds and nearby beach allows you to do just that. This year-round venue with heated indoor pool, short mat bowls and live nightly entertainment also offers enlightened “experience breaks” including digital photography, wildlife watching and arts and crafts.

The Gossips Cafe and Ice Cream Parlour, Yarmouth, Isle of Wight
The Gossips has two fabulous seafront locations – customers can lounge outdoors in the cafe watching the ferries come and go, or head down to the ice cream parlour at the bottom of the pier. The Gossips is famed for selling 13 flavours of melt-in-the-mouth Minghella’s ice cream, made in the Isle of Wight for 50 years by Anthony Minghella’s father.

Baywatch on the Beach, St Helens, Ryde, Isle Of Wight
This squat blue cabin at the water’s edge has fine views of the Solent and serves fresh seafood for both lunch and dinner.

Cliff Hanger, Blackgang Chine, Ventnor, Isle of Wight
One for all the family, the bright green and yellow Cliff Hanger is a fairly slow (up to 35mph) ride with no upside-down turns or vertical drops to scare the adults.

Well done to John Graney for having his image used and thanks for permission to reproduce here. 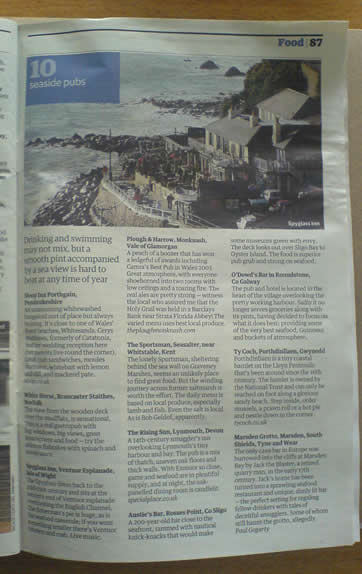 4 Comments on "The Guardian Loves The Isle of Wight"

Hi
The Aunty P’s picture of the spglass, which you use on the blog, is very similar to the one in the article. The original is available from me if you like. (For free and for nothing, The Guardian already paid me!)
Regards
John

We have a spare copy of the complete guide if you would like it. I could meet you in town tomorrow (Wed) to hand over.

@John – Thanks for the contact. Great that you got the commission from the Guardian. Thanks for the offer of the photo – much appreciated. We’re planning to put a shot of the Guardian newspaper in – and would be the icing on the top to have the original photo too.