Read and contribute to the 80 readers' comments ↓

We all know that the Isle of Wight is ‘the’ place to be on New Year’s Eve and Ventnor is no exception. 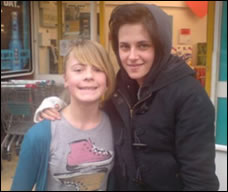 So it’s no surprise to hear from friend and reader of VB, Norbie, that Twilight (blockbuster vampire films) stars Robert Pattinson & Kristen Stewart have been spotted in our dear town, Ventnor.

Charlotte Stockdale gave us the first heads-up at about 1pm this afternoon asking “is it true Robert Pattinson is on the IOW?” on Twitter.

It’s anyone’s guess of where they’re heading tonight, but if you’re venturing out, don’t forget to take some garlic … and a camera to send us a photo.

A friend of the girl in the pics who was asked to post these shots to Twilight fansites has given us permission to use them here, so many thanks to the fan in the photos who did well to spot the actors, for letting us use them here. 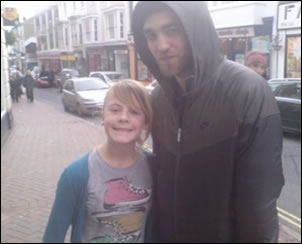 They’re probably going to that event at Ventnor Winter Gardens!

Do you know if the Pretty Things performed on the Ventnor Winter Gardens NYE party?

Vote Up00Vote Down
teamjasmett
They are on the Isle of Wight, visiting family. I had met the cast last month in london when i won tickets to the new moon premiere, but I just wish that no one will over crowd them. As many other fans, I know that they like their privacy and i want them to come down here more often to get away from all the hype. if… Read more »
Vote Up00Vote Down
Chris Roullier

Does that mean if I see Kirsten Stewart, I CAN scream?

as you, I totally agree with you, I’m also a huge fan from Belgium, I would love to meet them but during their promotion and not when they are on their private moments, I won’t do that either :)
Have a happy new year in the UK

if that’s true good for them!!

I’d love to catch a glimpse, just to see if he’s really that good looking!!! It’s nice they chose the IW as somewhere to spend new years.

Does rob have family in Ventnor??who?and what is that event in Ventnor Gardens?I,m so happy they are together and I hope that people live their privacity they deserve it

we saw them! They were outside scummers (sommerfield) :L

How exciting ;) So happy for Rob and kristen. May i ask what day you saw them? Was it on the 26th? Also, how long is the Boxing day display up for?
Thank you for your time,
Angie

how exciting to see the pictures! glad they are together. happy new year from canada.

OMG!! HNY to all!! When was this pic taken???Can anyone post links from the original source or owner??Can someone confirm if this is in ventor??
So Robsten is real or they are still so super gooooooooooood friends???

its deffo ventnor, i know the street. my mate from school lives like 10 min walk from where the photo was taken.

I met Rob on the fastcat on Weds :) very sweet.

Would you like to tell us more? Cause i’m dying here.

Not much to say. Kristen was a bit plain-faced, and short! Surprisingly. He was nice. I poked him and told him I love the films and he was grateful :) and beardy!

thanks for the info. :)
was rob only with kristen or did they have people with them? sorry, just curious.

I’m a huge Robsten fan, and am so thrilled they have spent the holidays together. Its also great if you see or meet them along the way. However, I think most Robsten fans would rather their location not be disclosed. The pappz and/or “crazed” fans will invade in no time. Give them some much needed space.

Yes it is in Ventnor Somerfield supermarket if u look for the store at IOW you can c the pic it’s the same store. This really made my day. Seeing something about them. Great job 4 hiding from paps.

woow
photos will be real?

When were these pics taken? Are they still here? X

Happy for both and hope they enjoy their holidays together. What a start for the New Year and a Statement at that! It’s amazing there’s no paps around. Can understand the “Boxing Day” event being an Aussie.

”Itâ€™s amazing thereâ€™s no paps around”

I am around on the Island, but I was sat down in front of the TV – I was not planning to go anywhere on New Years Eve lol

Mainland press agencies were all closed up for Xmas/NY anyway, so would have been hard to get some images circulated in a reasonable time.

So glad to see the people on the IOW have some class and are not hounding them, kudos to all of you who have seen them and haven’t crowded them!!

Who are these people? Are they local? Do they covet the precious things?

They are Hollywood actors/actresses. Starred in Harry Potter, Twilight etc.

Not local at all, however it appears their family are.

regards from valencia venezuela! hny this news is SO exciting!!!!!! i dont know why but i do really like them together!!!

it’s been days… Are they still there? or Did anybody see them lately somewhere around iow ?

i know they were with a group of people, does anyone who saw them tell me who, like was it rob’s sister, their mum oh i don’t know tom sturridge he’s cute hehe

Vote Up00Vote Down
cass
That girl should have never posted those photos. She should have kept them private for herself. For all the people talking about or caring about giving them “privacy”, this picture sure destroyed any chance of them getting any. Now people are looking for them. I wouldn’t blame them for not taking another pic with a fan ever again. Nothing is private anymore, and the paps will hunt… Read more »
Vote Up00Vote Down
Katie

Rubbish – any star who has their photo taken these days knows that it’ll end up online almost instantly. They’ve probably long since left Ventnor now anyway.

I can’t tell u why but I also want the 2 of them to be together. They got me with the first kiss in Bella’s bedroom. I loved the picture of them holding hands in Paris on the tarmac. I am so glad they were able to have some private time. All of your comments have been so kind. Regards from Va, USA.

Vote Up00Vote Down
gretchen
I agree, the photos should not have been posted – they let those photos be taken for the enjoyment of a fan, not to create a frenzy. if you are a Robsten fan, then let them have a bit of peace alone. This is tHEIR time off, let them enjoy it. Good for them, I hope they’re happy, regardless. Please, people, don’t scream. have a little class.
Vote Up00Vote Down
Teena

I agree, the photos shouldn’t have been posted on the internet. Give them their space, they’re people too and deserve some privacy.

Just an FYI… upclose….he is THAT GOOD LOOKING… ;)

kristen stewart looked plain-faced? I think she looks lovely not ugly at all

They look so happy. :) I know someone who ran into them in the area and they said they saw them on the streets but they looked couple-ly. There was physical contact and hand holding along with some arms around each other.

Vote Up00Vote Down
fluffgirl
those photo are not the isle of white ..the only one that is real is the one with kristen ,,the other one is photoshop..2 different pictures in 2 different country ..kristen’s hair is now shorter and black ..i think that was taken in vancouver last year…you people are so easy to fool that not wonder so many gossip magazine are sold..do you actually believe everything you read… Read more »
Vote Up00Vote Down
Katie

No they’re not on the isle of white, they’re taken on the isle of wight! And yes they most definitely are. Both pictures are clearly recognisable as being in Ventnor and there were lots of other people around when the pics were taken.

Vote Up00Vote Down
Deanna
Well I beg to differ with Fluffgirl, my brother in law is from England SouthHamptons which is where Rob’s family lives which isn’t too far away from IOW! He went there many times growing up, said it has changed a lot over the years but that’s definately it. And the picture of Kristen shows she does have short black hair,not brown, not long hello look closer. And… Read more »
Vote Up00Vote Down
Jane
On the one hand I am really happy to at last have PROOF that they are a couple etc as I think they are both so sweet together, on the other hand, however, I think that considering they do not want the press to destroy their relationship and are trying to keep it ‘private’, not to mention that they were in a private holiday, perhaps the fan… Read more »
Vote Up00Vote Down
CARMEN
I AM A 60 YEAR OLD BLACK FEMALE AND I HAVE BEEN INTO MOVIES AND MOVIE STARS SICE 1955. ROBERT PATTINSON IS WITHOUT QUESTION ONE OF THE GREAT ONES. PEOPLE, EVEN I, HAVE COMPARED HIM TO BRAD PITT, AND YET IN TRUTH, THERE IS NONE. I ONLY WISH THAT BEFORE I DIE I COULD MEET HIM, BUT I’M SURE YOU GUYS HAVE A BETTER CHANCE AT THAT… Read more »
Vote Up00Vote Down
Luby

They still around? Its all so exciting!!!

IOW tourist board slogan for next year:

I bet they hate that kid. lol.

no i’m really happy, hope they are togther :D

glad to see KStew and RPattz together in New Years Eve. what a good sign to start 2010. well,i hope in this so-called relationship will end up in marriage or else they might end up saying “i am single…again”.

Where can you find the girls blog? :o

Vote Up00Vote Down
Bella
Um… really she shouldn’t of posted these pictures on here, Kristen & Robert would of saw them and left Ventnor, so theres no point of the paps trying to hunt them, leave them alove, i mean i love Robert, and i idolise Kristen, and i think there good together, but maybe you should i dont know .. GIVE THEM A BREAK FROM ALL THIS RUMOURED ROMANCE! so… Read more »
Vote Up00Vote Down
sebastian

If they REALLY want to be anonymous – they should come to the ISLE OF SHEPPEY !!!!!!! nowt but sheep here – hence name. We would love to see them both and buy them a cuppa tea to warm up !!
love E & T xxxxxxxxx

I’m so exciting!!!!!! i really like them together!!! romance and loving couple..and caring (as in the movie… twilight)

Love U both (Robert and Kristen)… have a nice day together