More news from the Isle of Wight Steam Railway. Ed 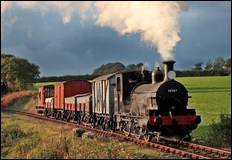 The Isle of Wight Steam Railway has announced that locomotives from the Bluebell Railway in Sussex and The Bodmin & Wenford Railway in Cornwall will be crossing the Solent in late May to appear at the IW Steam Railway’s 40th Anniversary Spring Gala (more details to follow).

Visiting locomotives
Ex-London & South Western Railway (LSWR) Beattie Well Tank Locomotive No. 30587 will be travelling up from Bodmin in Cornwall and making her first-ever appearance on the Island.

Travelling over from mid-Sussex to make her third appearance at the Havenstreet-based steam line will be ex-London Brighton & South Coast Railway (LBSCR) E4 Class locomotive No. 473 ‘Birch Grove’.

“We’re really pleased to be bringing these locomotives to Havenstreet for our Spring Gala”, said IW Steam Railway General Manager, Peter Vail. “And to have two such unique locomotives, both of which date from the Victorian era and both of which have a pedigree matching our own engines, makes it even more special. We’re planning a packed weekend of passenger and goods trains featuring both of our guest engines and as many of our own locomotives as we can muster.”

It is also intended to host a 40th Anniversary Year lecture with a renowned guest speaker from the world of railways and/or preservation.