We pull together a compilation of videos shot of the Boxing Day swim, which this year saw more entrants than ever. 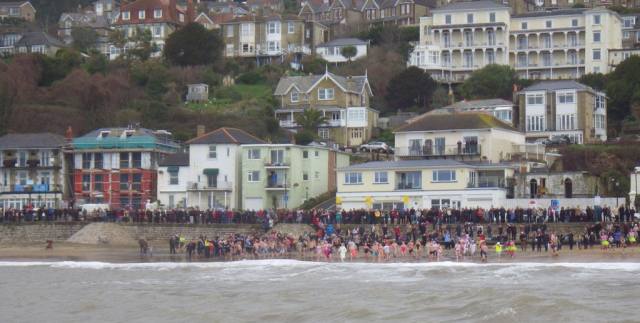 At least 2,000 spectators made their way down to Ventnor seafront on Wednesday to watch, according to organisers, a whopping 200 people brave the crashing waves for the annual Ventnor Boxing Day Swim.

Raising money for local cancer charity, P.A.T.C.H., the swim has been running for 32 years now.

The fundraising event is vital to the charity, with a healthy amount of money raised on the day through bucket donations, as well as sponsorship of the swimmers.

Compilation of videos
We shot our own short video of the event and have put together a compilation of others shot on the day.

Volunteers from Sandown and Shanklin Independent Lifeboat once again supported the event by providing cover from the sea and being on hand in case of any emergencies.

…though possibly a more open-ended question than “Chilly was it?” might have led to more feedback from swimmers. Mind you, the reporter on that piece must have been freezing himself by then, & then it’s hard to think …