Local councillors say they will do whatever is possible to prompt public debate over plans to disband the well-respected Coastal Management Team. 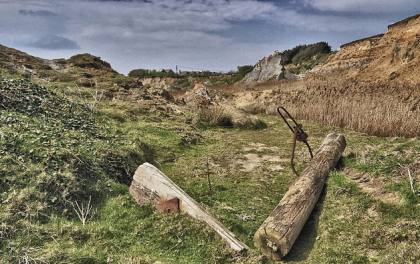 Following the OntheWight revelation published yesterday regarding IWC director Stuart Love’s plans to break up of the well-respected Coastal Management Team, this received from Ventnor Town Council. In their own words, Ed

At its meeting this week, Ventnor Town Council unanimously agreed to make public its serious concerns about the Isle of Wight Council’s intention to dispose of its Coastal Management team.

With a coastline of over 100 kilometres, 40% of which has to be defended, the team clearly has a major contribution to make to the Island’s life, yet they are involved in a 30-day consultation period of a major restructure by Director of Economy & Environment Stuart Love of his staff.

His three colleagues, while not facing redundancy, are being dispersed: one to Island Roads, another to the Planning Policy Team and the third to the Recreation, Leisure and Public Spaces Team.

The new structure will be in place from 15 April.

Concerns over funding
There is also a concern that the significant funding for Coastal Management that the Isle of Wight Council receives as part of central government’s annual grant will, in the absence of a team, be diverted elsewhere given that it isn’t ring-fenced.

Ventnor has its own concerns: a long coastline that is under threat while also being both a major tourist attraction and a site of special significance for international understanding of coastal change.

Prompting public debate
But the Town Council was also very aware of similar concerns for the whole Island and resolved to do everything possible to prompt public debate before it is too late to preserve what it believes to be an essential service.

Surely the Boy couldn’t get away with redirecting Central Government cash for Coastal Management to other departments, could he???

Bu the time we get rid of this corrupt and autocratic council, they will have raped our Island of anything worth having and we will lose the one thing we need, visitor attractions.

Vote Up00Vote Down
Crouchie
As I keep posting on numerous issues.Why no consultation or debate for the Island Electorate on matters that have such a significant impact, not just on our lives but our Children,Grandchildren and future generations. This is no place for a non elected officer to be making such an important descision under “Delegated Powers”. Stop this Fiasco NOW and debate any change after May 2nd. What’s the Rush… Read more »
Vote Up00Vote Down
pallance

Crouchie, whilst agreeing with your sentiments 100%, I greatly fear that voter apathy might prevail and this bunch of worthless villains might get back in.

Vote Up00Vote Down
Crouchie
Re Pallance’s comment, I know we are singing from the same song sheet,my concerns are the same as yours.I will not stop trying to talk to my friends,work colleagues and fellow Islanders in trying to stop these Despots destroy this Island where I was born and my Children and Grandchildren live. The Truth about Children’s Services,Riverside Centre,Educational Standards ETC,ETc,(The list is endless )can now be seen by… Read more »
Vote Up00Vote Down
peaceful_life

Ironically…this is but one of the many areas where the UK shcould/could be creating employment, yet blinded by the futile obsession with ‘growth’.

I wonder could someone help me with my question please…….does the coastal management team’s jurisdication reach to possible areas of marine conservation zones?

@peaceful_life:
TheCoastal Management Team look after the shore between low water to high water; marine conservation areas – where Natural Engalnd want to protect certain habitats or rare species – are beyond its remit.

Indeed, Natural England need to be hot on conservation.

Perish the thought of new ‘tech’ methods such as ‘seabed mining’ should take an interest around the island shores.

A whopping great hole has appeared at the bottom of Kings Bay Rd. Ventnor on the cliff top. Who says we don’t need a Coastal Management Team !

Vote Up00Vote Down
steephilljack
Quite a few cliff-falls after the wettest year ever recorded 2012. Totland to Colwell defences broken and closed. Landslip from Bonchurch to Shanklin closed. St.Helens to Priory Bay closed. Sandown to Culver Down closed. Lots more that I don’t know about I’m sure: add yours to this list…. Plenty of properties on the brink of the cliff. Who needs a coastal path ? Who needs a Walking… Read more »
Vote Up00Vote Down
tryme

I take it that Besley’s recent cartoon was fair comment, & the IWC have no wish to stop VTC from falling into the sea…

@ tryme: “the IWC have no wish to stop VTC from falling into the sea…”
The IWC would like to bury all those commies and anarchists who live in the Undercliff: that’s the plan!
All they need is plenty more rain.

‘Steephilljacks’
Your comments sum it all up , this bunch of idiots are destroying our Island with the Delegated Decisions or should we say Secret Decisions ….what the council forgets Is that they are Public Servants and we are the Public who pay their wages and pensions

Vote Up00Vote Down
Meursault
The Island’s Coastal Management Team were once the leading lights in terms of global coastal management, and with that came £m’s of funding for the Island’s coast. The loss of expertise = loss of access to funding. A very short-sighted decision that will cost the Island much more than the simple savings from a few officers salaries. Senior officers should be looking for savings closer to home… Read more »
Vote Up00Vote Down
RJC

When the baby kissers come knocking at your door in the coming weeks, ask them if Stuart Love is going to be an officer in their new setup. Tell them you will not vote for them unless they give you a straight yes/no answer.

Vote Up00Vote Down
Stewart Blackmore
You might describe me as one of the ‘baby kissers’ then RJC! All will, of course, depend on the make up of the Council on 3rd May. One thing you can be sure of – if there is a Tory majority then Mr Love will probably be safe. The ONLY way things can change is if there is a major change in the make of representatives at… Read more »
Vote Up00Vote Down
RJC
That’s a shame, I have voted labour all my life, but they stand a snowballs chance in hell this time. I shall probably be tactical this time like a lot of voters, so as to have a good chance of unseating the conservatives. You could be lucky if your people vote for the man and not the party. Depends on who I get standing for me before… Read more »
Vote Up00Vote Down