Ventnor Winter Gardens: Getting it looking better for the Summer

It’s over a year and a half since the council closed the Winter Gardens. Since then it’s not been maintained at all. The latest thing they’ve done is to board up all of the windows making it look ten times worse – just at the start of the holiday season

Read and contribute to the 26 readers' comments ↓

If you’ve been to Ventnor recently you might have noticed that the Winter Gardens is looking pretty shabby. 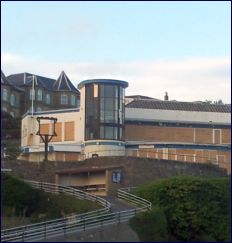 After years of neglect by Isle of Wight council, it wasn’t looking that good even when in their hands, but since closing to the public in January 2011 it has gone dramatically downhill.

A couple of weeks ago we noticed that all the windows had been covered with timber boarding. As you can see from the photos, it creates an awful impression for visitors.

Protection from vandalism
Knowing that planning permission had been granted and that the sale of the property from the Isle of Wight council to The Hambrough Group was in motion, we got in touch with Robert Thompson.

He told VB that a couple of weekends ago, he had to chase away about fifteen teenagers who had broken in and were vandalising the building.

Robert confirmed that the building hadn’t yet changed hands and that it had been the council who had boarded up the windows in order to keep the building safe.

He went on to say that once the sale was complete, work would start around November-time with an expected opening date of early 2014.

Paint the boarding cream?
It struck us, as we were looking at the building earlier in the week, that if the boarding could be painted cream, it would have less of a negative impact on the street scene over the summer season.

We got in touch with the council to make the suggestion. Our comments have been passed to the property services manager and we’ll let you know when we hear back.

26 Comments on "Ventnor Winter Gardens: Getting it looking better for the Summer"

Will the paint stick or will it peel off in the sun, resulting in the application of broken crab shells and grass cuttings by the contractor?

Unfortunately – the council will over-complicate it – needing to do several risk assessments, obtain four quotes from suitably qualified companies or persons etc.

If it were you or me, we’d just get a few litres of paint and have it done by Monday.

why dont you offer your services to the council then?

Do you seriously think they would let a public spirited citizen volunteer for such a hazardous task? Have you visited the planet earth recently? This IS the IW council we’re talking about.

Do they still have a Property Services Manager?

as an admirer of this building its a shame a textile hoarding of the buildings architectural elevations cannot be printed and hung around the perimeter of the Winter Gardens to create the sense of the building/site in flux.

ok… you pay for it then.

why would the council pay for something like that when they will soon sell the building?

a few tins of paint might be a good idea. Spending lots of taxpayers money on pointless things which wont happen before the building is sold is a complete waste.

Vote Up00Vote Down
Ventnorandproud
Informative article, this; shame about the nay-sayers and cynics (not on this comments board, I hasten to add..) who are rubbing their hands with glee and claiming it as vindication for their pessimistic and backward-looking exhortations not to sell to RT. Whether they like it or not, it has been – and sniping about it now is hardly constructive. I quite agree that it’s a shame for… Read more »
Vote Up00Vote Down
Steephill Jack

It looks like an opportunity for the Ventnor Fringe Festival. Get those boring boards painted by anarchic, creative and freaky Ventnor artists.
Known who I mean ?

Interesting that they are now talking about it being open in early 2014. Their architect told the Council planing meeting that it would be open next summer …

Joe, I think you will find that the architect said to the Council “It will be open for the summer”

He just didn’t say which summer.

Echos of Frank James? An ‘iconic’ island building closed to the public, going dramatically downhill, creating an awful impression, not looking good after years of neglect by IWC, teenage vandals breaking in & being chased away….

(Those of us prefering a better outcome will be opening the gates at FJ at 10.00 on Sunday (29th July). Al fresco lunchers welcome – ?BYO Robert Thompson hampers?)

It’s nothing like Frank James Hospital, there are plans to full renovate the Winter Gardens. The report says that work will start in November.

Vote Up00Vote Down
Steve Goodman
Actually MIB, that makes it more like FJ, because plans (recently re-revised) have existed for years, and completion work was due to start on more than one occasion! I do, however, believe that once the WG is sold to Robert Thompson it will be given a new lease of life. FJ could perhaps become a fabulous restaurant with rooms, but for now it’s picnics again on Sunday… Read more »
Vote Up00Vote Down
Ian

@sticky stuff…ok Ill happily contact Manser Practice and ask for the elevation drawings. It wouldn’t cost as much to print on textile…Ill even get down there with my paint brushes if they decline!

Vote Up00Vote Down
Catwoman
This isn’t the only building in Ventnor that is an eyesore.Has anyone seen the Bandstand lately?This was built to a great fanfare,and was a focal point of the town.Now,the ironwork is rusting,some of the ceramic place names are cracked,and of course,some vandalistic daubing.A very sorry sight. The eco toilets were dirty,the floor needed sweeping,what a welcome for visitors.I did e-mail Ventnor Parish Council,and never had the courtesy… Read more »
Vote Up00Vote Down
Steephill Jack

Quite right.It seems the Town Council get blamed for everything that goes wrong inVentnor. People should be proud of VTC They are going to tremendous lengths to solve Ventnors problems.

The lavatories are the responsibility of the County Council.
The ‘bandstand’ (I assume you refer to the sewage pumping station)is a Southern Water Property.

Vote Up00Vote Down
CATWOMAN
I am well aware of the correct name of the Bandstand,thank you,this was written for economy,it obviously had no detrimental effect,as you instantly knew to what I was referring.The individual ownership did not form the content of my e-mail,and as you were not privvy to this,I feel you are unable to comment.I addressed this to a ruling body of Ventnor,to bring the matters to its attention,and yes,thank… Read more »
Vote Up00Vote Down
CATWOMAN

Please read my comments made to Debby,as you should also be aware,the nature of my e-mails are unknown to you,so how how can you presume I have not addressed my comments to the appropriate bodies?All that is made known to you is the the fact that one of them was made to Ventnor Parish Council.

Dear Catwoman,
I queried the address you used because we are not a parish council we are a town council – hence the e mail address (ventnortc).
As a Ventnor town councillor, I made the query so that I might follow up any lack of response if our Town Clerk had received an e mail from you.

I apologize for the incorrect status,Town Council it is,my e-mail did not return as ‘unsent’ in my in box,so the Town Clerk,or someone responsible should have received it.I am happy that you are aware of these issues,which,as I stated do not reflect well on Ventnor,whoever owns them.

Although neither building is the responsibility of Ventnor Town Council you should have had a reply, trusting that you used the correct e mail address. Was it: [email protected] ?