Vestival was launched on Sunday past by the sit-in lads with a cinema.

When we came across Vestival yesterday, we thought it had only just been dreamt up. 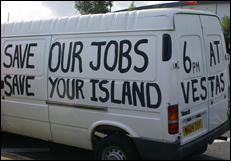 Speaking to Mike this morning from inside the Vestas sit-in, we learnt that it was the lads who came up with the idea of Vestival on Sunday night.

Cinema show
For their own amusement and to entertain the crowd of supporters outside, they rigged up a cinema.

Using a projector and a stereo that they found inside hooked up to a laptop and a microphone, they projected a huge cinema on to the wall above the balcony.

Using this, they were able to give the supporters on the outside some idea of what they’ve been up to over the time they’ve been inside.

Keeping busy
As Mike told VentnorBlog, “We try and invent new ways to keep ourselves busy and have a bit of fun because, although we do phone a lot of people and speak to a lot of media, it does get a bit boring at times.”

Sounds like the projector is a great way of keeping the supporters on the outside in touch with what’s going.

Tonight sees the next meeting outside the Vestas plant at 6pm.