A mass grave memorial of war dead that has been lovingly restored at Northwood Cemetary as part of a Heritage Project was officially unveiled by school children this week. 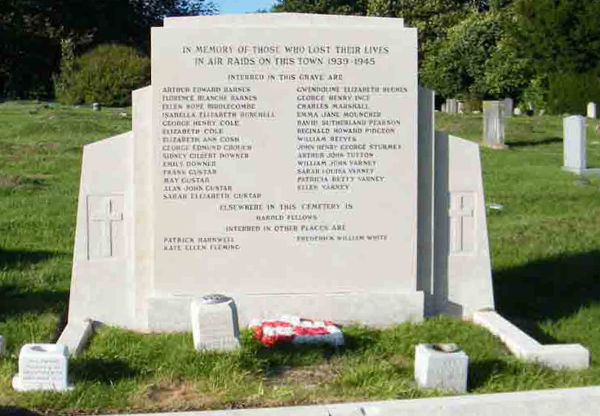 Nearly 60 children commemorated the war dead from both World Wars at a special learning picnic held in Northwood Cemetery on 4th October.

As part of the Northwood Cemetery Heritage Project supported by the Heritage Lottery Fund and BIG Lottery, children from Lanesend Primary School visited the site with Estelle Baker, the Isle of Wight’s Heritage Education Officer to learn more about the lives of those who died during both world wars and who are buried in the cemetery with the chance to explore the site which is currently having a major facelift including the restoration of its Victorian Chapels and most notable memorials.

Mass grave has been lovingly restored
A special booklet is being prepared by the Friends of Northwood Cemetery who are leading the project working alongside the Isle of Wight Council and will be incorporated in future guided visits for both adults and children.

The booklet covers the 17 First World War military graves, 13 Second World War graves and many family memorials in the cemetery and also provides the touching story behind the civilian mass grave which records the loss of life during the bombing of Cowes on 4th/5th May 1942.

The mass grave has been lovingly restored as part of the project and was officially unveiled by the children at the picnic.

Touching stories
With a chance to see a range of world war artifacts the children learnt about the touching stories of those who had suffered the horrors of war and paid the ultimate sacrifice – men like Frederick Turner who as part of the Royal Artillery was sent to Belgium in the first week of October 1914 to assist with the defence of Antwerp.

He was sent home from the front by the end of October and died at Northwood House in Cowes which had been turned into a hospital at the outbreak of war on 24th October 1914. He wrote the following words in recognition of the care he had received there “Tho’ but gunner I may be and I am far away, they pleasant mem’ries will recall of my brief Northwood stay”.

“Bringing our heritage to life in this way for younger generations is so important, as it gives them a real understanding of the personal way in which war touched the lives of local people.”

Children unveiled grave memorial
As the children unveiled the newly restored mass civilian grave memorial they learnt of perhaps one of the most touching stories how, following the huge loss of life during the air raid on 4th/5th May 1942, Cowes Urban District Council felt that the victims should be buried in a communal grave. One was dug at the top of the cemetery for 27 of the victims, with the present War Memorial being added later.

The day of the funeral saw Union Flag draped coffins, borne on lorries, passing huge bomb craters as the procession made its way from the cemetery gates to the communal grave.

ARP wardens acted as bearers for all the coffins except one, that of a cub scout. His cap and neckerchief were placed on his coffin which was carried by senior members of the scout troop as he was lovingly laid to rest.

Masonry skills
A chance to learn about masonry skills and how the memorials, including the mass civilian grave memorial, have been lovingly restored was provided by local company Wight Stonemasonry.

Dave Crouch from the company said,

“We’re delighted to give young people the opportunity to learn about traditional craft skills.

“These skills are part of our heritage and have been passed down through the generations – now it’s our turn to share these skills for the future.”

At the end of the learning walk, the children tucked into a vintage picnic containing wartime favorites such as spam sandwiches and tea loaf, as so many evacuee children must have done as they arrived at their new wartime homes.