‘Why take the heart of a community out?’ Passionate parents’ video shows off West Wight school some want closed

Passionate parents create video of a West Wight school to show Councillors how much would be lost if the school was closed. ‘Why take the heart of a community out?’ they ask. 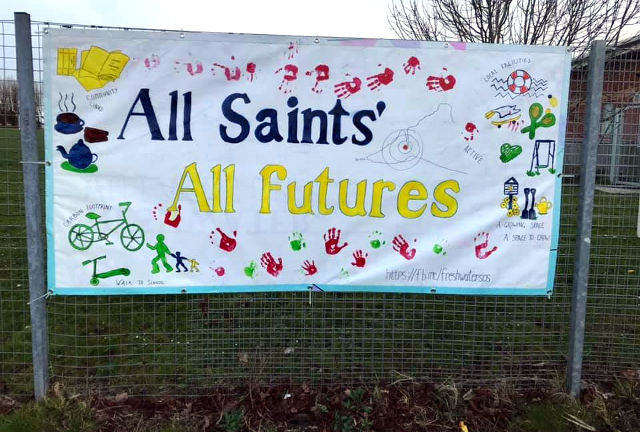 Ahead of this week’s Cabinet meeting, parents opposed to the closure of All Saints’ Primary School in Freshwater have been busy creating a video to show off the school.

It’s been put together for the Cabinet member in charge of making the decision about the school’s closure, Cllr Paul Brading and Brian Pope, the education officer with Hampshire County Council.

In the secret garden we see produce has been planted for the season, and hear how money has been donated by the Parish Council and members of the local community have given their time to help develop the garden.

As we head up the drive to the school we see the original building which was donated by the church for educational purposes.

‘Outstanding’ pre-school
The early years provision at All Saints’ has been rated by Ofsted as ‘Outstanding’ for the last three inspections.

Although the IWC have said the pre-school would remain on the site, it’s pointed out in the video that the building relies on the main school for its water, gas and electricity.

As the video nears the end of the footage, you see the fantastic sports field and open space available to the school for outdoor learning.

Petition going strong
An online petition that was launched back in February has attracted over 750 signatures so far.

It was launched to save the school after Cllr Chris Whitehouse is reported to have written to the Catholic leader of Portsmouth Diocese, saying he believed All Saints ‘must close’.

Parents and pupils to march
There are two activities this week for those opposed to the school closure.

On Wednesday 13th March at 5.45pm, parents and pupils will be marching from the school gates of All Saints’ up to the public consultation meeting (6-8pm) at the school hall.

There will also be a public demonstration at Moa Place from 4.30pm on Thursday 14th March, ahead of the 5pm Cabinet meeting.

The campaign page can be found on Facebook. Watch the video below to see around the school grounds.

2 Comments on "‘Why take the heart of a community out?’ Passionate parents’ video shows off West Wight school some want closed"

What’s Chris Whitehouse got to do with it. He represents Newport, his favoured school is debt ridden and has falling applications. He may live locally but contributes nothing to his local community.

Please! Cllr Whitehouse represents just one part of Newport. There are six other IW councillors within the parish, none of whom have interfered negatively in this issue.